When it comes reviving the past, timing and presentation is everything.

Sony’s first wave of “The Toho Godzilla Collection” of second- and third- generation Japanese Godzilla films on Blu-ray came out in May, timed to the theatrical release of the American remake (the discs are reviewed on Cinephiled here). This second wave arrives the week before the American 2014 Godzilla arrives on disc and digital formats. 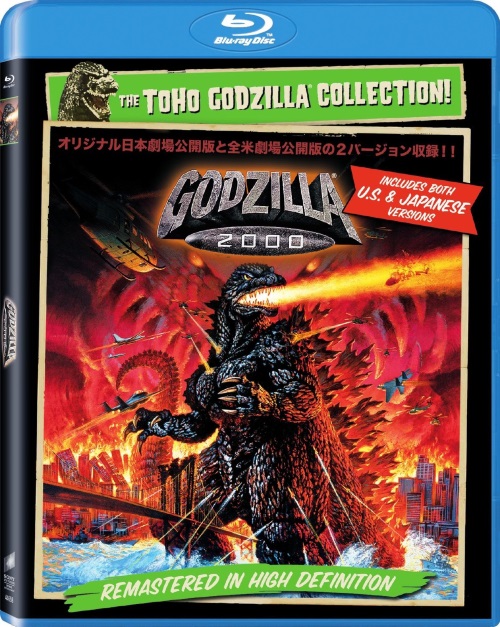 After Roland Emmerich’s Godzilla flopped, Toho took back their home grown movie monster turned cinema hero for the second reboot of the franchise and the third generation of movies. In Japan it was called the Millennium series and like the previous reboot, The Return of Godzilla (titled Godzilla 1985 in the U.S.), Godzilla 2000 (1999) swept away a generation of sequels and pretended that most (if not all) of the films since the original Godzilla never actually existed. Though clearly a landmark in the Japanese franchise, I can only guess that Godzilla 2000 (Sony, Blu-ray) wasn’t included in the first wave of Blu-ray upgrades because it, quite frankly, is not one of the better films of the series.

Godzilla is on the move again just as an ancient UFO is dredged up from the ocean. In a fitting bit of turnabout, the script appropriates Roland Emmerich’s Independence Day, though on a significantly smaller scale and with a Japanese giant monster sensibility: this lone silver spaceship parks on a Shinjuku skyscraper, drains the city of all computer information, and transforms into a mutant monster the resembles something between a skyscraper sized Predator and Jabba the Hut’s dungeon ogre from Return of the Jedi. Meanwhile an all-volunteer force of science nerds called the Godzilla Prediction Network, run by peacenik professor Yuji (Takehiro Murata) and his precocious adolescent daughter, clashes with their arch rivals, the Crisis Control Institute, a government strike force armed to destroy Godzilla run by Yuji’s bloodthirsty nemesis Katagiri (Hiroshi Abe, whose eyes bug out in glee every time he launches a missile).