It’s getting harder and harder for a movie to just happen anymore. I’m not talking about the ways movies get made (although, to be sure, that’s become an extremely messy business), but the ways movies and audiences get together. In the absence of a vast public that simply “goes to the movies,” film-selling has become a matter of creating Events—Events that may or may not live up to the induced expectations but which in any, er, event have an uphill fight to stay alive and spontaneous. Close Encounters of the Third Kind is having a harder time than most. It’s a $20 million film that a lot of people are anxious to recover their money on. It’s a film in a genre, sci-fi, variously blessed and burdened with an enthusiastic/rabid following whose specialized requirements for satisfaction do not necessarily have much to do with a film’s being good as a film. It’s a film in a genre, moreover, that has recently given the cinema its Number One Box-Office Champ, Star Wars, and hence become newly embattled among critics and commentators who deplore the preeminence of “mindless,” two-dimensional, feel-good flicks on the top-grossing charts.

END_OF_DOCUMENT_TOKEN_TO_BE_REPLACED 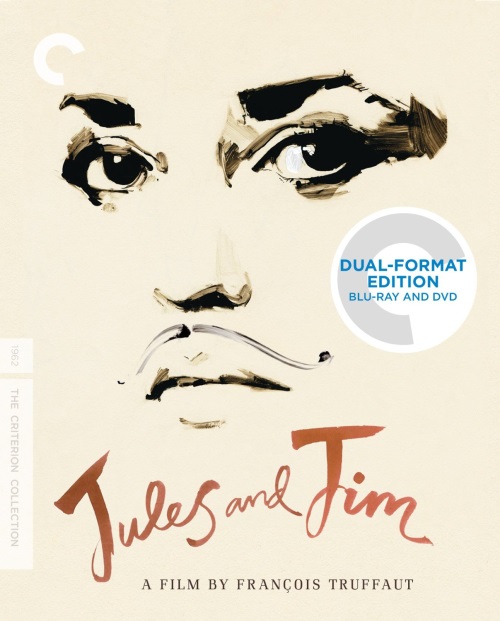 Jules and Jim (Criterion, Blu-ray+DVD Dual-Format) is another Criterion upgrade of a previously released DVD, debuting on Blu-ray mastered from a new, restored 2K digital film transfer and released in a dual-format edition. An intense and reckless Jeanne Moreau delivers a performance steeped in mystery and enigma in Francois Truffaut’s tale of friendship and love. Oskar Werner is the Austrian Jules, a vibrant young biologist on slow, melancholy slide while Henri Serre plays his best friend, the enigmatic, introspective Parisian writer Jim. A scandal upon its release for its unapologetic treatment of a menage-a-trois, the film contrasts the stylistic freedom of nouvelle vague techniques (zooms, flash-cuts, handheld shots taken literally on the run) in the scenes of carefree youth with a somber, subdued approach for the “adult” years of impermanence. The handsome period piece jackrabbits through the story with concentrated scenes interspersed with newsreel footage and montages, pulled together by an interpretive “literary” narrator who layers the film with an added richness.

Carried over from the earlier DVD edition are two commentary tracks (one by co-writer Jean Gruault, Truffaut collaborator Suzanne Schiffman, editor Claudine Bouche, and Truffaut scholar Annette Insdorf, the other featuring actress Jeanne Moreau and Truffaut biographer Serge Toubiana), excerpts from the 1985 documentary The Key to Jules and Jim about the author Henri-Pierre Roche, an episode of Cineaste de notre temps from 1965 dedicated to Truffaut, and a segment from the series L’Invitie du Dimanche from 1969 with Truffaut, Moreau, and filmmaker Jean Renoir, footage of Truffaut interviewed by Richard Roud at the 1977 New York Film Festival, excerpts from Truffaut’s presentation at a 1979 American Film Institute “Dialogue on Film,” a 1980 archival audio interview with Truffaut conducted by Claude-Jean Philippe, video interviews with cinematographer Raoul Coutard and co-writer Jean Gruault, and a video conversation between scholars Robert Stam and Dudley Andrew. The accompanying booklet features an essay by critic John Powers, a 1981 piece by Truffaut on Roché, and script notes from Truffaut to co-screenwriter Gruault. 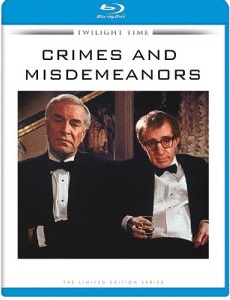 It feels odd to write that Crimes and Misdemeanors (Twilight Time, Blu-Ray) is my favorite Woody Allen film. It certainly doesn’t make me feel good, though it does offer a mix of despair and elation, and it may be a tad heavy (and yes, perhaps even heavyhanded) at times. Yet I think it’s one of his masterpieces, with characters that live with such a power within their defining contradictions and a theme that reminds us that life isn’t fair and how we deal with the unfairness is the measure of our humanity. Martin Landau received his second Academy Award nomination for his understated performance of an adulterer who is ‘persuaded’ (by Jerry Orbach) to let a hitman take care of a problem, namely the mistress (Anjelica Huston) who refuses to go away. In a parallel story Allen is a documentary filmmaker who falls for his attractive producer (Mia Farrow) while shooting a distasteful project that he sabotages out of juvenile pique. The bittersweet turns simply bitter as it builds towards the climax, but even amidst all the emotional damage, Allen still finds a spark of hope. It’s one of his masterpieces. Sven Nykvist shoots the film with a mix of warmth and remove. And remember: if it bends, it’s funny. If it breaks, it’s not funny. Features Twilight Time’s trademark isolated musical score and an eight-page booklet with an essay by Julie Kirgo. Limited to 3000 copies, available exclusively from Screen Archives and TCM.

Early in François Truffaut’s L’Histoire d’Adèle H., before Adèle has met up with the young lieutenant she followed from Guernsey to Halifax, she is seen walking down a street near the military garrison, moving east to west, against the flow of pedestrian traffic (made up almost entirely of men in uniform). Though we are scarcely one reel into the film, we already know her to be, if not a liar, at least an obsessive fictionalizer, and a follower of fancy rather than fact. We sense, too, that this Lieutenant Albert Pinson whom we have not yet seen is not quite the devoted lover she has made him out to be, and that her passion for him may well be a one-way street.

A man in an officer’s cape whips by her; she whirls and cries out; he turns, and the two come face to face at center screen. The man is François Truffaut. Her face immediately tells us her error: yet she keeps looking, for longer than would seem necessary, and the officer looks back. Not a word is spoken, but a great deal more is going on in this shot than a simple case of mistaken identity.

In the first place, the mistake is rather improbable, in light of the Albert Pinson we meet later; for this officer is darkhaired, short, and easily old enough to be the father of Adèle’s tall, blond lieutenant. The looks, in fact, which pass between the woman and the officer on the street convey not so much the embarrassment of mistaken identity as a moment of recognition. The scene primes us for that later scene, near the very end of the film, in which Adèle walks past the real Lieutenant Pinson in Barbados without a glimmer of recognition: How complete has been the introversion of romantic fantasy in the mind of this woman who once recognized a little of her lover in nearly every man, and now fails to recognize him even in himself!

END_OF_DOCUMENT_TOKEN_TO_BE_REPLACED

As everyone must know by now, the title of Steven Spielberg’s science-fiction extravaganza refers to an actual meeting with an extraterrestrial visitant; or, as the advertising more directly puts it, “contact.” “Contact” is very much what the movie is all about. No film since 2001: A Space Odyssey has applied E.M. Forster’s “Only connect” dictum so spectacularly. Explanations are unimportant, but understanding, intuitive and visceral, is paramount. Like 2001, Close Encounters is a stunning visual experience (both films feature the dazzling work of special effects man Douglas Trumbull, who also directed the excellent Silent Running in 1972); if it’s intellectually less profound, it has a more direct appeal to the emotions, and whether or not it’s in the same league as Kubrick’s masterpiece couldn’t concern me less. In other words, it’s good enough, for all Kubrick’s obvious influence on it, to stand on its own as a classic of the science-fiction genre, and also outside any genre considerations. And there aren’t many s-f films you can say that about.

Rumour has it that Spielberg planned to end the film by using “When You Wish Upon a Star,” the hit song from Disney’s cartoon Pinocchio, as the tune behind the closing credits.* It’s as well he didn’t; that would be spelling things out, which the film elsewhere avoids admirably, and also a touch twee. But it gives a hint of one of the film’s main aspects. It’s a magical movie, a film that exults in the potency of cinema, in the type of experience you can get only from a film, in the tools whereby a filmmaker can excite, entice and provoke his audience. And thus it becomes a film about films, and also about filmmaking. One of Spielberg’s leading actors (taking, indeed, nearly all the acting honours going) is François Truffaut, the artist as actor as critic, the man who not only came up with the longest-ever Hitchcock interview, but also once suggested that Howard Hawks’s big-game-catcher movie Hatari! was secretly an essay on the topic of filmmaking. A similar interpretation of Close Encounters holds a lot of water. When, at the film’s climax, Truffaut marshals enormous human and technical resources, shouting “Plus vite!” and “Allez!” whilst striding to and fro and waving his arms, he is, to all intents and purposes, a director controlling a set, the biggest in film history.