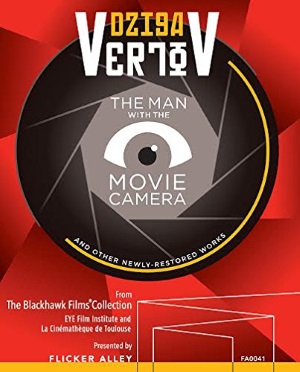 Dziga Vertov: The Man with the Movie Camera and Other Newly-Restored Works (Flicker Alley, Blu-ray) presents four features (and one newsreel short) by the great Soviet filmmaker, all making their American Blu-ray debut. They have been newly scanned from the best sources available and digitally remastered by Lobster Films in France. The collection is a collaboration between Lobster, Film Preservations Associates (and the Blackhawk Films Collection), EYE Film Institute, Cinémathèque de Toulouse, and the Centre National de la Cinématographie and is presented in the U.S. by Flicker Alley.

The Soviet Union’s revolutionary documentarian and film theorist, Dziga Vertov was the head of production and editing of the Kino-Pravda newsreel unit between 1922 and 1925. He put his years of experimentation in weekly newsreels to work in the 1924 feature film with Kino Eye / The Life Unexpected (1924), a continuation of his work on the Kino-Pravda series. The mixture of slice of life observations (often captured with a hidden camera) with documentary studies and playful cinematic tricks was his first attempt to create a new kind of filmmaking celebrating life in the Soviet Union under communism. The episodic film is structured something like a variety show, with the recurring thread of “Young Pioneers,” a youth brigade of Soviet boys and girls dedicated to helping the poor and needy, running through the film as a kind of narrative glue. Nestled between these uplifting sequences are glimpses into taverns and bars, a state home for the mentally ill, and the black market, fanciful documentary investigations into the origins of bread and meat (from the slaughterhouse to the farm), and a scene of kids at play in the water that turns into a gorgeous diving montage that presages Leni Riefenstahl’s Olympia by over ten years.