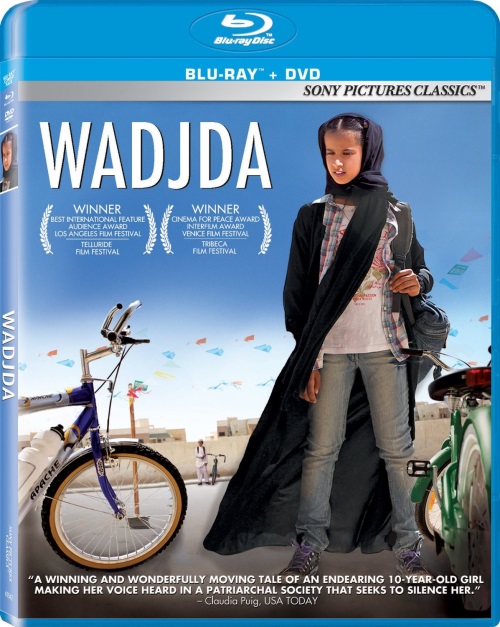 Wadjda (Sony, Blu-ray+DVD Combo, Digital, On Demand), the first feature film produced in Saudi Arabia and the country’s first submission to the Oscars, did not make the final cut, but it is just as worthy as any of the nominated films I’ve seen.

The plot turns on the efforts of a 10-year-old girl to buy a bicycle, which girls are simply not supposed to have, but the story takes on the way women are treated in Saudi society, a culture that (as presented in this film) makes Iran look downright enlightened. It’s also written and directed by a woman filmmaker, Haifaa Al Mansour, which necessitated some complex production workarounds, such a directing street scenes from within a van and communicating with the cast and crew through video feeds and radio sets. I don’t mention that to try and impress you into seeing the film, mind you, but to offer an idea her commitment to making a film about women struggling for their dignity in a culture that refuses them the same rights and opportunities as men. She was living it while making the film.

Waad Mohammed plays Wadjda, a spirited, smart, and ambitious pre-teen who seems eager to engage with the world around her while her mother, her teachers and her principal all tell her that she can’t, at least not on equal terms. She doesn’t let that stop her – she wears sneakers to school, constantly removes her head scarf, refuses to cover her face in public, and listens to secular music on the radio – but she’s no idealized symbol. Wadjda has the self-interest of kids who get fixated on a goal, she’s puckish and playful and defiant and not always polite, but she is a person in full. As is her mother (Reem Abdullah), an educated professional at the mercy of men in every arena of life, including a husband who is ready to divorce her for failing to deliver him a son. It’s compassionate, realistic, hopeful, and absolutely lovely.

Blu-ray and DVD editions feature commentary by writer/director Haifaa Al Mansour, the featurette “The Making of Wadjda” and a Q&A with Haifaa Al Mansour at the Director’s Guild of America screening. 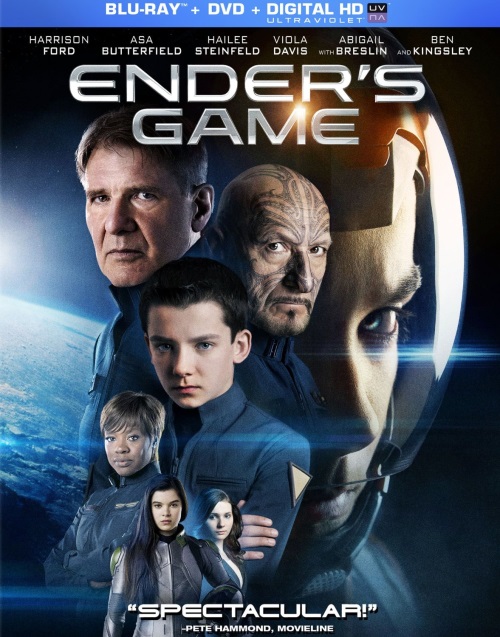 Ender’s Game (Lionsgate, Blu-ray Combo, DVD, VOD, On Demand), adapted from Orson Scott Card’s award-winning young adult science fiction novel, came out as yet another attempt to launch a young adult franchise, this one with gifted adolescents training to become the next tactical commanders in an interstellar war. Fans were happy to find it pretty faithful to the novel but as a movie is plays like a response to Starship Troopers for the video game era, with an undercurrent of bullying and building character through psychological torment and vague comparisons between playing digital war games and committing genocide. Asa Butterfield is the diminutive hero, a small, gentle genius of a lad forced to defend himself against bigger, meaner, violent boys, and Harrison Ford drops all human dimension as a single-minded commander willing to sacrifice a few kids to forge a new leader.

The Blu-ray and DVD both feature commentary by Producers Gigi Pritzker and Bob Orci, a collection of deleted and extended scenes with optional commentary by director Gavin Hood, and an UltraViolet Digital HD copy. The Blu-ray Combo also features the eight-part documentary “Ender’s World: The Making of Ender’s Game” and a bonus DVD copy of the film. 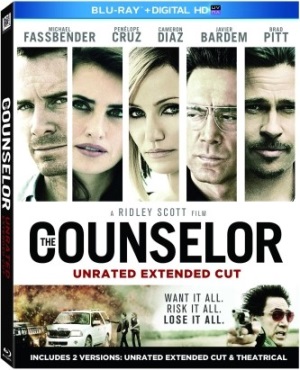 The Counselor – Unrated Extended Cut (Fox, Blu-ray, DVD) is actually only on the Blu-ray version of the disc, which offers both the theatrical cut and an extended version with over 20 minutes of additional footage, as well as the featurettes “Truth of the Situation and “Virals.” The DVD simply offer the theatrical version of the film.

Either way, the first original screenplay by Cormac McCarthy is one dark trip, like one of his novels stripped to the basics: you head into the underworld and you end up hunted by relentless demons. Michael Fassbender is the amateur criminal entrepreneur and Penélope Cruz, Cameron Diaz, Javier Bardem and Brad Pitt are colleagues, bystanders, and hardcore players tangled up in death. It’s practically abstract and Ridley Scott’s direction, which is so focused on minutia and process it fails to give us any actual characters behind the actors, has a habit of hammering home the same themes over and over again in repetitive monologues. McCarthy’s language is a treat but his circular writing is just numbing.