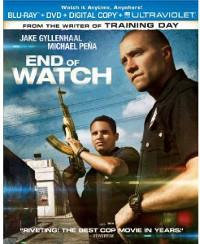 David Ayer is something of a specialist when it comes to cop movies. And by that, I mean the day to day lives of cops on the beat, the kind of stories that tend to get overlooked in favor or big action movies or corruption thrillers.

End of Watch, which adopts a found-footage aesthetic by way of Cops, looks at the lives of two patrol officers and best friends: ambitious ex-Marine Brian Taylor (Jake Gyllenhaal) and married career man Mike Zavala (Michael Peña). Ostensibly we’re seeing video shot for Brian’s college course but that’s just a way to justify bringing his portable video camera and pinhole vest cams along his tour of duty. The film is really about their byplay, their job, and the everyday dangers and the extraordinary threats of life on the beat in Los Angeles.

I had the opportunity to speak with Mr. Ayer in advance of the film’s release on Blu-ray and DVD. Along with questions about the use of video technology both on the job and in the film, he talked about the real-life inspirations for the stories, Jake Gyllenhaal’s commitment to the part and the film, and, of course, what he’s been watching.

“End of Watch” arrives on DVD and Blu-ray on Tuesday, January 22, with commentary by director/writer David Ayer and five brief, promo-style featurettes that run under three minutes apiece. It will also be available On Demand.

Was this simply for pleasure or are you working on a new project?

You have become quite the urban cop movie specialist. Off the top of your head, besides your own movies, what do think are the best movies about cops on the beat?

On the beat. Interesting. Well, for me, one of my favorite cop movies is “Q&A,” the Sidney Lumet film with Nick Nolte. I like the old school stuff, like “Prince of the City,” more character-based works that don’t necessarily fetishize law enforcement but honor the people doing this stuff.

Do you find inspiration in those seventies cop films, those rougher dramas with more focus on character, the character of the community as well as the individuals themselves.

Yes, exactly. Showing the world and having the world become a character and this ecology of police and the people that they police is always fascinating.

Commandeering yet another police car to exploit dangerous days and ways in L.A.’s South Central badlands, David Ayer (Training Day) drives deep in End of Watch. Sadly, deep for Ayer is pretty shallow. What saves this cop show from its predictable tropes and clichés are terrific performances by Jake Gyllenhaal and Michael Peña, who’ve got each other’s backs as actors and as “brothers” in law enforcement. The rhythms of their bone-deep affection, played out in banter and in brutal action scenes, keep End of Watch moving and save it from entirely bogging down in Hollywood-macho vignettes of good guys going up against trash-talkin’ ghetto dregs.

Ayer’s a sucker for the stylistic fallacy spawned by Blair Witch Project and Paranormal Activity: the lazy notion (already old hat) that an unmanned camera, the mechanical eye, automatically ensures documentary reality and immediacy. So most of Watch‘s action is caught on patrol-car cams, cellphone cameras, lapel video recorders—a supremely irritating gimmick that batters the viewer with crazily dipping and bobbing camerawork. Messy and uncomposed doesn’t equal realism, but that approach is convenient cover for flat-out not knowing how to shape and move and give organic life to cinematic fictions.

Riding along with cops Brian Taylor (Gyllenhaal) and Mike Zavala (Peña), we’re often perched down under the dash to viddy the easy give-and-take between these very different comrades.Taylor’s an ex-Marine, clearly a striver in love and work. His shaved head and sculpted features contrast with his less driven Hispanic partner’s softer, darker face. Their talk—funny, raunchy, serious—ranges through love, sex, police work, family values, their cultural differences. Both are young, learning from each other about how a man lives honorably and survives on the job. Effortlessly, Gyllenhaal and Peña enact authentic friendship, the kind of camaraderie that looks casual but is cemented in stone.