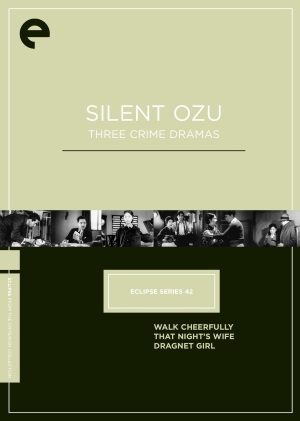 Silent Ozu – Three Crime Dramas (Eclipse 42) (Criterion, DVD) is an apt companion piece to Criterion’s previous set of silent Yasujiro Ozu films on their Eclipse line. The artist called the most “Japanese” of Japanese directors, famous for the quiet restraint and rigorous simplicity of his sound films, was a voracious film buff more interested in Hollywood movies than his own national cinema early in his career and he thrived in a great variety of genres. The previous Eclipse set collected a trio of family comedies. This one offers three gangster films: Ozu noir, so to speak, inspired by the late silent crime pictures by Josef von Sternberg and American pictures. These films are more intimate character pieces than the gangster romantic tragedies of their American cousins, but they are lively productions directed with a dynamic style he stripped away through the 1930s.

Walk Cheerfully (1930) mixes the gangster drama with character comedy in the story of a hood named Ken the Knife (Minoru Takada) who vows to go straight when he falls in love with a “good” girl. His old girlfriend, who sports a Louise Brooks bob, isn’t happy about being dumped and decides to get revenge on them both. In fact, there’s a lot of American influence in the film, from the storytelling to the camerawork (from tracking shots to oblique, dramatic camera angles) to fashions; these hoods are as sporty as their Hollywood counterparts with their flashy suits and fedoras and swaggering attitudes. This is a bright picture, as the title suggests. The mob isn’t happy that Ken and his partner (Hisao Yoshitani) have left the gang but for all the obstacles, this is on the more lighthearted side of the gangster genre.