The title of Errol Morris’ The Unknown Known, a profile of the life and career of former Secretary of Defense and Secretary of State Donald Rumsfeld, is a direct reference to Rumsfeld’s most famous TV appearance. Discussing the evidence (or rather, the glaring lack of evidence) linking Iraq with weapons of mass destruction provided to terrorist groups, which was the stated reason for invading Iraq, Rumsfeld told reporters: “there are known knowns; there are things that we know that we know. We also know there are known unknowns; that is to say we know there are some things we do not know. But there are also unknown unknowns, the ones we don’t know we don’t know.” It was a cagey piece of analysis, both a true assessment of the nature of intelligence and an obfuscation of the administration’s intelligence failure, in line with another sophisticated excuse offered up to the press: “the absence of evidence is not the evidence of absence.” A decade later, the evidence is still absent and Rumsfeld is still refusing to admit that the United States invaded Iraq without provocation or justification, merely suspicions ungrounded in any firm evidence.

It is not exactly a companion piece to The Fog of War, Morris’ documentary on former U.S. Secretary of Defense Robert MacNamara who oversaw the escalation of American involvement in Vietnam. Like that 2003 documentary, Morris engages with a former Secretary of Defense, discussing a foreign war that was launched and (mis)managed under his watch and the indefensible misconduct and scandals involving American soldiers and officer. 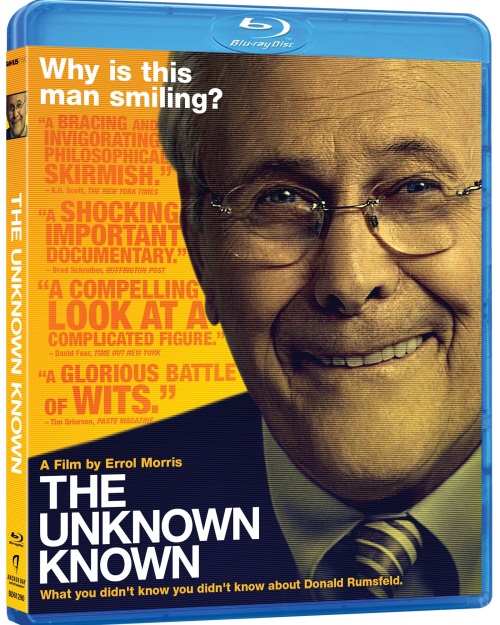 The Unknown Known (Anchor Bay, Blu-ray, DVD) is not exactly a companion piece to The Fog of War, Errol Morris’ documentary on former U.S. Secretary of Defense Robert MacNamara. But like that 2003 documentary this takes on a former Secretary of Defense, Donald Rumsfeld, and a foreign war that was launched and (mis)managed under his watch, with indefensible misconduct and scandals, and it is built on defining moments culled from hours of one-on-one interviews with the subject. Where it differs is the response of the subject: Rumsfeld never admits that the basis for war was built on a failure of intelligence or even that it was mistake to invade Iraq and he smiles his explanations to the camera. His smile, with those half-moon eyes suggesting a grandfatherly affection backed by experience and cocksure authority, is the defining image of the film.

Errol Morris is one of the most inventive and engaging non-fiction filmmakers in the world today, using a strong visual presentation to pull audiences in while building his case on excellent research and choice archival materials. But it is his talent as an interviewer and interrogator, honed over decades of filmmaking, that gives the film its dramatic power and its educational punch. Using his trademark Interrotron, a set-up which puts the camera in place of the interviewer as far as the subject is concerned (so they speak directly into the lens while engaging Morris), he confronts Rumsfeld without coming off as confrontational and uses silence as an editorial and a dramatic device. Those dead spaces after Rumsfeld’s statements suggest both an incompleteness and a directorial disagreement. Rumsfeld himself seems to take the production as a platform to lay out the legacy of his statesmanship with the confidence of authority behind his perfectly articulated reasoning that often never quite answers the questions posed to him. There is no doubt that Rumsfeld is both a smart, savvy political players and a polished media creature. But for all the easy-going pose of humility, he isn’t the least bit humble.

Blu-ray and DVD with commentary by filmmaker Errol Morris and a short interview with Morris discussing the genesis and the production of the documentary. Also features the 57-minute archival presentation “Third Annual Report of the Secretaries of Defense,” an hour-long recording of a conference from 1989 featuring Rumsfeld, Robert McNamara and Caspar Weinberger, and the text of Morris’ four-part New York Times op-ed piece “The Certainty of Donald Rumsfeld.”

More new releases on Blu-ray, DVD and digital at Cinephiled

The conceptual appeal is unmissable: Having won an Oscar for his 2003 The Fog of War, a study of Vietnam War architect Robert McNamara, documentary giant Errol Morris would naturally turn to another controversial U.S. Secretary of Defense for a bookend project. The subject here is Donald Rumsfeld, who held the job during the commencement of the Afghanistan and Iraq wars. Rumsfeld became famous for his loquacious (at times downright hammy) press conferences, when the sound of his own voice would lead him through ever-expanding circles of rhetoric—a Yogi Berra elevated to a position of life and death. Thus his classic formulation: “There are known knowns . . . There are known unknowns . . . But there are also unknown unknowns.”

I always thought that was one of the more sensible of Rumsfeld’s puckish quotes. But—at the risk of sounding Rumsfeldian—it does give a glimpse into a mind in which even uncertainties are something to be certain about.