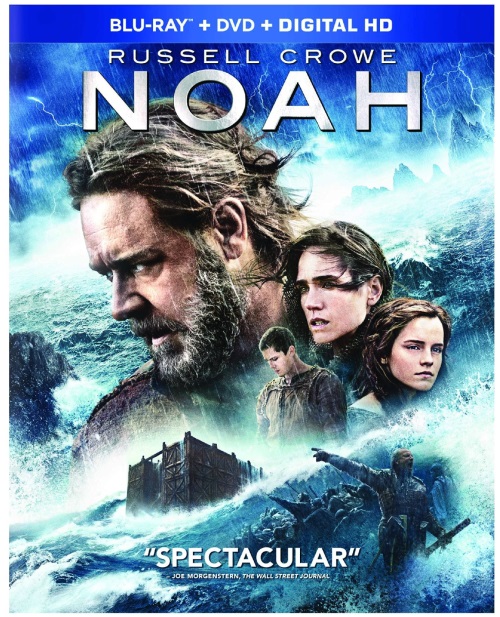 The new movie Noah, director Darren Aronofsky’s $130 million epic retelling of the story of Noah’s Ark and the Great Flood, carries this advisory: “While artistic license has been taken, we believe that this film is true to the essence, values and integrity of a story that is a cornerstone of faith for millions of people worldwide.”

Noah has been banned in some Middle Eastern countries, and attacked by some Christian critics for taking liberties with scripture. Aronofksy told the New Yorker that “Noah” is “the least biblical biblical film ever made,” hardly the kind of comment to calm the faithful

Fair disclaimer, but it’s likely not one that will reach all filmgoers who see “Noah” with the expectation that the Aronofsky’s version will closely mirror the biblical series of events. For a little scriptural background and film fact-checking, Steven D. Greydanus, a film critic for the National Catholic Register and his own website, Decent Films, and a Bible student at the Archdiocese of Newark viewed the film before its release. The experts’ general verdict: there’s a lot that closely mimics the epic story, but some liberties are taken. Warning: Spoilers for the film obviously follow.

Is the word God missing from the film as some critics have charged?

No, says Greydanus. “For the most part, God is referred to in the film as ‘the Creator’ and this is a creative choice that I think does a lot for the film. It helps to defamiliarize the language somewhat, it makes the figure of God a little more mysterious to us.” But His name is clearly spoken when Ham, second son of Noah, says to Tubal-cain: “My father says there can be no king. The Creator is God.”

Peter Bogdanovich had wanted to make Nickelodeon in black-and-white, as he had The Last Picture Show and Paper Moon (“In color it feels made up,” he explains, “In black and white it seems more real”), but coming to the project after a pair of flops (Daisy Miller and At Long Last Love), the studios weren’t very accommodating. So he turned to retrospective reconstruction to desaturate the color and create a black-and-white version for this “Director’s Cut”-branded revision. END_OF_DOCUMENT_TOKEN_TO_BE_REPLACED

Darren Aronofky comes across as a very centered, easy-going, down-to-Earth guy. Not what you’d expect from the guy who directed Pi, Requiem For a Dream and The Fountain. Maybe not even The Wrestler, though his love of the story and the characters comes through when he talks about. I interviewed Darren Aronofsky in Seattle back in November, 2008, during his national press tour to promote The Wrestler, which had won the Golden Lion at the Venice Film Festival and was the buzz of the Toronto International Film Festival. Since then, the film has been praised as one of the best films of the year and Mickey Rourke’s tender turn as aging wrestler Randy “The Ram” Robinson the comeback story of the year. Rourke earned a Golden Globe Award and early Thursday morning, January 22, both he and co-star Marisa Tomei were honored with Oscar nominations.

Early in the film, in the scene where Mickey Rourke’s character, Randy, has slept in his van and wakes up the next morning, he’s instantly surrounded by kids who adore him and he adores them, I though to myself, “He’s Wallace Beery in The Champ!”

(laughs) Sure. When we cast Mickey it was pretty hard to get the film made, and the reason was is because pretty much every financer in the world said that Mickey Rourke wasn’t sympathetic. So it was important for me to prove them wrong. And I think after the first three or four minutes of the film, you’re kind of hooked into Mickey. It’s partly because of that scene but I think it’s also because you look into his eyes and he’s very truthful, he’s filled with soul, he’s filled with spirit, and there’s just a burning desire in him.

Mickey Rourke has been doing great work for the last eight years but no one has been noticing it because they’re mostly small films and supporting roles.

He’s also had to play tough guys a lot. One of the great things about Mickey, that I remember from Angel Heart and The Pope of Greenwich Village and Barfly, is that even when he’s this incredible tough guy with all this machismo, there’s so much softness inside. And when you meet Mickey, that’s who he is. There’s a lot of armor built up, but it’s really covering up all this fear.

Casting him as a wrestler also evokes the boxing career he had after he left acting in the nineties.

Sure. I thought that, since he was a boxer, it would be very easy for him to learn how to wrestle. It was actually, I think, twice as hard for him. In boxing you want to hide your punches, you don’t want your opponent to see the punches. In wrestling, you want people in the back rows to see the punch coming two minutes before it ever happens. So Mickey really had to unlearn how he moved in the ring. I think also, as a boxer, you really look down on wrestling because it lampoons what you are doing. So it was hard, at the beginning, until Mickey learned to respect it as something that was as much sport as theater. Once he accepted that there was something theatrical going on, he was able to understand how to approach it.