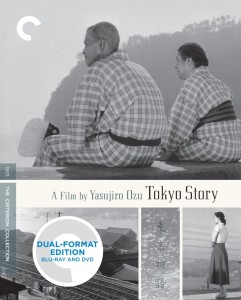 Tokyo Story (Criterion, Blu-ray+DVD Combo) is perhaps the definitive film by Yasujiro Ozu, the artist called the most “Japanese” of Japanese directors. Chishu Ryo (Ozu’s favorite performer) and Chieko Higashiyama star as an elderly couple in rural Japan who find a cold welcome waiting for them when they come to Tokyo to visit their two urbanized children, who too busy with work and their own lives to pay them any attention. Within this simple framework Ozu creates a quiet but profound drama of the changing face of Japanese culture and the loss of traditional values in modern society.

The familiar themes and formal elements are all here – the quiet, graceful formality of Ozu’s style, the “tatami mat position” of his camera (about 36 inches from the floor, as if viewed from the position of a person seated cross-legged on a floor mat), the themes of familial responsibility and sacrifice – executed with the sureness of a master at the peak of his powers. But it’s also a resolutely modern portrait of post-war Japan, where western fashion defines the business culture and traditional dress is reserved for home, and careers and success increasingly dominate the lives of the rising generation. The painterly images bring the past and present together and the still life compositions have a serenity contradicted by the collision of cultures. It is sublime and one of the masterpieces of Japanese cinema.

Previously available on DVD from Criterion, this new Blu-ray+DVD Combo is mastered from a new 4k film transfer and digital restoration, which upgrades the image significantly, and features commentary by Ozu scholar David Desser and three documentaries: the feature-length profile of the life and career of Ozu “I Lived, But” from 1983, the 40-minute tribute “Talking With Ozu” from 1993, and the 45-minute “Chishu Ryu and Shochiku’s Ofuna Studios” from 1988, all carried over from the previous DVD release. The accompanying booklet features an essay by critic David Bordwell (updated from the original version featured in the DVD release). 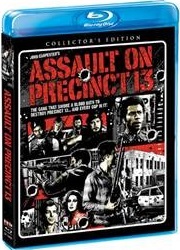 Assault on Precinct 13: Collector’s Edition (Shout Factory, Blu-ray) isn’t John Carpenter’s first feature but it’s the first real John Carpenter film, with his themes and sensibility in rough but recognizable form. Ostensibly an urban crime thriller of street gangs gone wild, it plays like a cross between a Howard Hawks western and a zombie siege film that meets in a desolate Los Angeles no man’s land of a nearly abandoned neighborhood. A small group of people—cops, criminals, civilians and office workers—find themselves suddenly under siege by a nearly faceless gang in a nearly vacant police station.

Carpenter turns his dingy set into a claustrophobic cage and builds the tension as the gang takes out the besieged members one by one, forcing the survivors into the corner for a last stand. The acting is hardly Oscar material, but Carpenter fills his characters with real character and his smart, dramatically strong sense of visual design and tight pacing pulls the film together as it continues. For all the exposition dealt out in the opening half hour, it’s become an almost abstract act of violence by the end, motivations long forgotten by the attackers and survival the only thought on the minds of the dwindling survivors. And this is Carpenter’s first film shot in Panavision, his format of choice for the rest of his career.