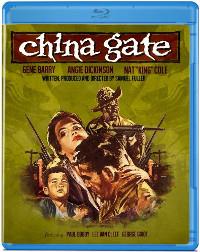 I’ve been waiting quite literally for decades for a widescreen release of Sam Fuller’s China Gate (Olive) on home video. Long overdue on disc, it has never been made available widescreen on video of any kind, relegated to pan-and-scan on the long out-of-print VHS release and on every TV or cable showing I’ve ever found. And I’ve been looking for a long time. Olive Films, working with Paramount, has finally offered the complete film on home video.

Set in the early years of the Vietnam War (when it was still called Indochina) with a multinational platoon of French, American, and German career soldiers, it’s classic Fuller pulp storytelling. Angie Dickinson gets a memorable introduction — all long legs stretched out over a bombed-out saloon in the rubble of a Vietnamese village — and an even better character as Lucky Legs. She’s the daughter of an American soldier and a Vietnamese mother and the mother of an adorable boy who received all the Asian characteristics that skipped over her. Don’t fret that she doesn’t look Asian, because that’s essential to the story: her G.I. husband, the gruff Sgt. Brock (Gene Barry), fell in love with a woman who looked American but his bigotry reared up when he took one look at his newborn son and he walked out on wife and child both.

That makes for a volatile situation when the estranged couple teams up for a mission to blow up a North Vietnamese munitions dump, using her booze smuggling operation as cover for their mission. He’s doing it for duty, she’s doing it for an American passport for her son.

Nat ‘King’ Cole co-stars as a fellow American soldier disgusted by Barry’s racist rejection of his son — he’s not much of an actor but he creates a strong impression on screen (watch him bite back a scream when he steps on a punji stick) and sings the film’s melancholy theme song — and Lee Van Cleef is Dickinson’s Vietnamese cousin, a true red communist commander who wants Lucky to move north and join his side.

Fuller was a real American maverick who wrapped politics and social commentary into his punchy, two-fisted stories, working within the Hollywood culture when it suited his projects and outside the studio system as his style and subject matter evolved. His patriotism made him both a prime cinematic cold warrior and one of the most perceptive and insistent critics of racism. China Gate is filled with both anti-communist rhetoric and an anti-racism message, all in a platoon mission drama shot in California forests and studio sets standing in for the Vietnam jungle.