Flicker Alley releases two more collections of classic silent comedies. Chaplin’s Mutual Comedies 1916-1917 (Flicker Alley, Blu-ray+DVD) collects the greatest run of comedy shorts in Chaplin’s career in newly restored and remastered editions, and The Mack Sennett Collection: Vol. One (Flicker Alley, Blu-ray) collects 50 comedies of a variety of lengths (including one feature) from Sennett’s studios, from 1909 to 1933 and his early sound comedies. 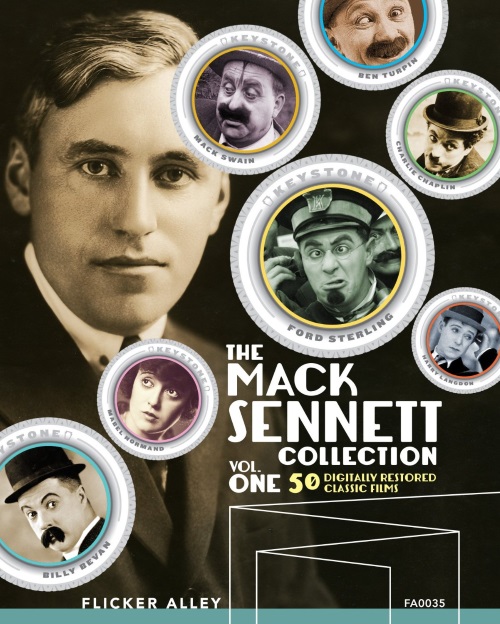 The Mack Sennett Collection: Vol. One is the goldmine here. It’s not that it necessarily features superior work to the Chaplin classics (those Chaplin Mutuals are among the greatest silent comedies ever made) but that it rescues so many films either previously unavailable or only available in compromised or inferior editions and it encompasses so many silent movie greats that began their respective careers in his studios and, in most cases, remained to flourish there.

It opens on Mack Sennett as writer and star of The Curtain Pole (1909), a nonsense comedy that sends Sennett (in heavy make-up and absurdly overdone facial hair) on a quest to replace the title object and ends with him literally gnawing on the pole to get it down to size. D.W. Griffith directs in perfectly professional mode, keeping the absurdities going with all due haste, but Mack Sennett takes the helm for the next five shorts, slowly removing himself from the frame and giving the star parts over to Mabel Normand and Ford Sterling, two of his most reliable stars for the next decade.

This is slapstick at its most basic, all overcharged energy and wild-eyed mania, but Sennett (who eventually leaves directing to others but still writes many of them and produces them all) slowly perfects the genre through the course of the disc, which takes us through the evolution from one-reel comedies to two- and three-reel pictures with slightly more logical plots and creative comic inventions. And they introduce us to the great Sennett stock company: Fatty Arbuckle, Charlie Chase, Chester Conklin, Al St. John, Mack Swain, Edgar Kennedy, and a young British comic by the name of Charlie Chaplin.

A Thief Catcher (1914), a proto-Keystone Kops comedy that was thought lost until a print was discovered in 2010, features Chaplin in a supporting role, and he directs and stars in the half-reel Recreation (1914), trying to pick up a girl on a park bench. There are three shorts that revolve around plots involving bombs (the round cannonball type with long fuses, of course), the terrific three-reel Fatty and Mabel Adrift (1916, with Sennett’s two greatest stars and Arbuckle directing—he’s the forgotten slapstick master thanks to a career cut short by scandal), and Gloria Swanson and Wallace Beery (as the villain, of course) in Teddy at the Throttle (1917), which ends with Swanson chained to the railroad tracks and her faithful dog rushing to the rescue. It’s ridiculous, sure, but this kind of comedy relies on an internal logic that simply escalates the capers and the desperation of heroes and villains alike. The crazed extremes of this one are really quite charming.

The second disc takes us from 1917 through 1925, with shorts featuring the lively Louise Fazenda (including the 5-reel / 52-minute Down on the Farm, 1920), Chester Conklin (whose cross-eyed smile is one of the most famous images of silent slapstick), Billy Bevan and Sid Smith. The highlight for me, however, is the feature comedy The Extra Girl (1923), a six-reeler starring Mabel Normand at her most charming. Harry Langdon stars on a couple of shorts and Carole Lombard is one of Sennett’s Bathing Beauties in Run, Girl, Run (1928), and the third disc ends on two of the best shorts to come from Sennett’s studios: The Dentist (1932) and The Fatal Glass of Beer (1933), both featuring W.C. Fields, who made a brilliant transition from silent buffoon to cranky sound comic. Sennett’s comedies were famed for their orchestrated anarchy but Fields is a force of curmudgeon chaos unique unto himself.

These shorts are restored (and sometimes rescued) from a variety of sources and some are downright scruffy, but the wonders of high-definition digital masters still gives us often crisp images under the noise of damage and that kind of care is at least as important as film restoration. For most of the shorts, however, the quality is quite fine. There are films over 100 years old here and it’s astounding that they’ve survived in viewable condition at all. Each short is accompanied by a lovely original score and almost half of them feature optional commentary by a comedy historian. Other supplements include outtakes, archival behind-the-scenes footage, TV clips, and the complete 1954 This Is Your Life episode celebrating Mack Sennett. A 28-page booklet features a guide to the shorts (including shooting locations) and credits. 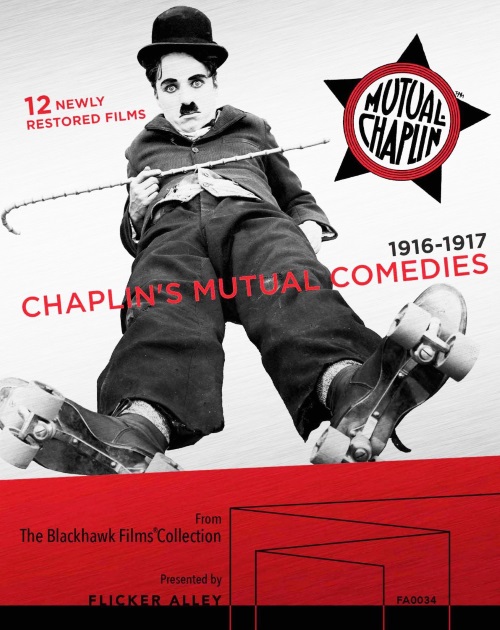 The two early Chaplin shorts in the Mack Sennett set makes a fine campanion to Chaplin’s Mutual Comedies 1916-1917. Chaplin called his 18 months at Mutual “the happiest period of my life” and these 12 two-reel comedies remain his finest achievements in short filmmaking: slapstick ballets of distilled Chaplin comic genius. He had unprecedented freedom, an enormously lucrative contract, and a company of creative artists at his personal disposal and he turned the studio set into his creative playground, improvising on film to work out his ideas.

Case in point: The Floorwalker, his first film for the studio. Always one to latch onto the comic possibilities of inventive props, he turned an escalator into the centerpiece of the comedy, where his rapscallion clerk continually incites the store’s crooked manager (Eric Campbell). He takes it further in the solo masterpiece One A.M., where he steps out of the Tramp persona to play an inebriated gadfly at war with his home, battling everything from a staircase to a suit of armor to a resistant Murphy bed, all seemingly set on keeping him from getting to sleep. These shorts become a comic workshop as Chaplin investigates the slapstick possibilities of an array of props and situations while refining his persona as the down-but-not-out everyman.

Chaplin refined his trademark character The Little Tramp with the help of his two key co-stars: burly, barrel-chested Eric Campbell, his hulking physical opposite who forever played the bullying nemesis (often behind a positively demonic beard), and sweet faced Edna Purviance, the alternately demure and plucky innocent he’s forever courting, saving, or simply mooning over. Ms. Purviance is featured in The Vagabond, Chaplin’s third Mutual short, a rural melodrama of a young girl saved from abusive guardians by the resourceful Tramp. Favoring pathos over slapstick, it looks forward to the sentimental melodrama of his features to come. In The Count, Chaplin and Campbell crash a society bash under false identities to woo a rich lovely (Purviance, of course), but Chaplin soon reverts to his impulsive instincts and turns the posh gathering into an anarchic free-for-all. And when the Tramp decides to take The Cure, he comes prepared with a trunk full of alcohol which quickly inebriates the guests and staff of the sanitarium. The revolving door becomes a comic centerpiece (like the escalator in The Floorwalker), which befuddles the inebriated Chaplin and infuriates gout stricken nemesis Campbell. It’s another example of Chaplin spinning a 25-minute masterpiece from little more than a character, a setting, and a situation.

Equal parts class clown, downtrodden social outcast, and sentimental softy, Chaplin’s continued appeal lies not merely in his comic invention but his dogged defiance of authority, class, and convention, and these classic shorts preserve the edginess he smoothed out in later features. As a lowly menial in The Fireman, Chaplin is cheerfully oblivious to chaos he causes to the ordered firehouse and still manages to emerge a hero. The Pawnshop shows the Tramp in a more aggressive role than we’re used to, goofing and playing practical jokes on his coworkers, The Rink puts him on roller skates for a burlesque ballet on wheels, and The Adventurer makes him an escaped convict who hides out in a high society party crawling with cops. Behind the Screen thumbs a nose at the movies in general and Mack Sennett (Chaplin’s old boss) in particular with a lampoon of the studios that concludes with the invention of the pie fight (“I don’t like this highbrow stuff,” comments one victim). His Little Tramp is settling into final form by now—equal parts class clown, sneaky bully, downtrodden social outcast, and sentimental softy.

As he neared the conclusion of his contract he became increasingly more ambitious and mixed his tried and true comic formula with social commentary for two of his most enduring works. Easy Street is Chaplin’s most successful mix of social issues and slapstick comedy. As a rookie cop in the city’s toughest neighborhood, a slum overrun with bullies, drug addicts and gangsters, the goodhearted Chaplin isn’t above a little unconventional policing—when his Billy club proves ineffective on gargantuan Eric Campbell’s thick skull he resorts to gassing him with a compliant street lamp. And The Immigrant finds the Promised Land less than rosy for peasants herded like cattle on the ship and wandering the streets of New York looking for work and food, but the Tramp’s ingenuity and resilience becomes a symbol of hope for the future as well as a comic riposte.

The five-disc set features each and every short and supplement on both Blu-ray and DVD, collected in a sturdy steelbook package. These short have all been released on DVD in fine editions from Image. These new editions, all remastered from 35mm elements from the Blackhawk Collection and Film Preservation Associates, have a more nuanced gray scale than the earlier DVD release, which has a more pronounced contrast (which helps cover the imperfections). The clarity of this set reveals the imperfections in the source prints but the added definition also reveals previously unseen or obscured details and offers a sharpness unseen in the earlier release. They are truer to the originals and to the archival source materials and give viewers something approaching a 35mm experience at home. These digital masters look like film prints.

Each short features a new original score performed by small combo or small orchestra (many of them recorded from live theatrical performances), with Carl Davis’ 1995 score for One A.M. carried over from the Image DVD release. I miss the Carl Davis scores from the previous disc and some of these new scores are a bit out of synch with the film (I actually didn’t notice while watching them the first time through but was alerted by the keen-eyed viewers on various home video forums and found that yes, it drifts on The Floorwalker, for one; to be honest, it’s not as important to me as the image quality). The new scores, however, are marvelous in their own right and there’s an alternate improvised piano score for each film as well.

It also features the American home video premier of the documentary The Birth of the Tramp, directed by Serge Bromberg and Eric Lange, and the 1996 documentary Chaplin’s Goliath, Kevin Macdonald’s loving portrait of the burly Scottish comic Eric Campbell, Chaplin’s giant nemesis in 11 of his 12 classic Mutual shorts. He was one of the most famous screen comics in the world when he died in 1917, yet is almost forgotten today. The accompanying booklet features an essay and notes on each short by silent film historian Jeffrey Vance, updated from the essay in the Image DVD set, plus credits for the restoration, music and archival sources.