The Logan brothers list their family’s dismal relationship to luck, ticking through some of the calamities that have befallen the clan. One piece of evidence is “Uncle Stickley’s electrocution,” a colorful citation. Who was this Uncle Stickley? How did he get electrocuted? Why was he named Stickley? These questions remain unanswered and Uncle Stickley is never referred to again. Part of the pleasure of Steven Soderbergh’s Logan Lucky is its flair for throwaway lines and little character beats. This movie does not aspire to greatness or significance; being extremely clever and thoroughly competent is the goal here.

The film borrows the shape of Soderbergh’s Ocean’s Eleven series in its devotion to the old formula of the heist picture. But the setting is the opposite: Instead of sophisticated thieves plotting to knock over a Las Vegas casino, the conspirators here are a bumbling collection of blue-collar West Virginians whose dubious plan is to rob Charlotte Motor Raceway during a NASCAR event.

In the decidedly non-comedic Foxcatcher, Steve Carell plays a guy so obviously bizarro that his success in life as a public figure could only have happened for one reason. He was filthy rich. Throughout this movie, there’s a sense that people are looking at John du Pont and just barely holding it together. Their body language says “Can you believe how weird this guy is?”, but their behavior says, “Hey, as long as he’s writing the checks …”

Du Pont inherited fabulous wealth, and toward the end of his life decided to spend a lot of it on wrestling. He built a state-of-the-art practice facility at his Pennsylvania estate, Foxcatcher, and acted as a figurehead coach for Olympic athletes there. The story culminated in violence, but as the movie tells it, there was plenty of strange behavior even before the tragic end. Director Bennett Miller (Capote) has created a film that exists almost entirely as a single, sustained, skin-crawling mood.

The funniest part of 22 Jump Street might be its end credits sequence, a rapid-fire succession of imagined future sequels for this series. Jonah Hill and Channing Tatum take their undercover cops through myriad different settings: medical school, culinary school, the seminary, etc. There’s even one proposed sequel (it might have been 29 Jump Street) in which Hill is replaced by another comedy star due to a salary dispute.

22 Jump Street doesn’t maintain this level of goofiness throughout its running time, but it does have enough solid yoks to please fans of the 2012 21 Jump Street. Newcomers might be less enchanted. This one’s obsessed with its own status as a sequel. We get constant reminders of how doing something for the second time is never as good as the first, and how a bigger budget doesn’t necessarily translate to higher quality. 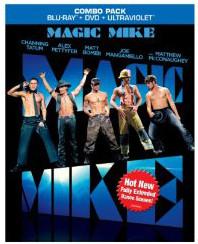 Summer steamrollers like The Avengers sometimes feel like cinematic beat-downs. Good or bad, the mechanics of these big brawls can be numbingly repetitious. Their vulnerable manflesh stuffed into kid costumes and muscle suits, superheroes battle one another bloodlessly, bumping and grinding in the service of saving the eternally imperiled world. Borrrrr-ing! For an antidote and a really good time, go see Magic Mike, Steven Soderbergh’s funny, exhilarating, down-and-dirty celebration of a different breed of costumed superstud — and a much earthier brand of bumping and grinding.

Soderbergh’s footloose movie about Tampa hunks who strip for a living is no Nashville, but this director shares Robert Altman’s eagle eye for the idiosyncrasies of folks who populate a showbiz subculture, as well as his ability to riff on rhythms of half-heard, possibly improvised conversation among guys who share a trade, however infra dig. Drawn from Channing Tatum’s own stint as a stripper back in the day, the script — by first-timer Reid Carolin, the actor’s producing partner — doesn’t aim for big narrative fireworks. The story flows the way life does when you mostly live at night: working up a head of steam onstage, stoned, sleeping around with strangers, your days slipping by in a hangover haze.

The movie’s mornings-after and afternoon delights are drenched in bruised, golden-dirty Florida sunshine. That exquisitely decaying light can wear its denizens down, but it’s also energizing, a real turn-on. Magic Mike catches that alternating beat in hot bursts of physicality and dreamy, drug-fueled languors. A slow-simmering love affair between Tatum and quirky charmer Jody Horn warms up during walks in the sun. As disengaged as a pleasant, vagrant breeze, Soderbergh’s camera drifts around their conversations: casual, intermittent, sometimes inaudible, punctuated by laughter. Nothing’s nailed down in Tampa’s fluid light; Soderbergh’s taking moving pictures of the flux and flow of human experience. (The director shot and edited, under his usual aliases.)