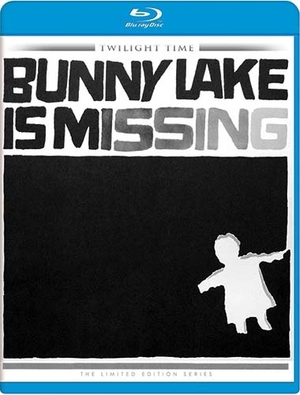 Bunny Lake Is Missing (Twilight Time, Blu-ray) – In the late 1950s and early 1960s, no American director melded classic Hollywood style and cool modern European elegance better than producer/director Otto Preminger. His handsome films are celebrations of introspection and stylistic remove and his best work defined not by heroes and villains but complex, flawed, achingly sympathetic characters. On the surface, this 1965 mystery is no more than a smartly done, intelligently written thriller but Preminger’s fierce cinematic intelligence guides a fluid camera that effortlessly tracks, glides, and reframes characters as they shift through scenes, shifting our perspective along the way.

Carol Lynley is an American single mother who has just moved to London with her brother (Keir Dullea) and her young daughter Bunny, who we never actually see before she suddenly goes missing. Laurence Olivier delivers one of his best performances as a police inspector full of blank smiles, putting on a mask of practiced civility while investigating the disappearance of a child that no one can remember seeing. Lynley is another of Preminger’s lithe, lovely heroines who finds herself isolated and alienated, a stranger in a culture that feels just slightly off (Noel Coward is particularly unsettling as a landlord with questionable motivations), while devoted brother Dullea supports her through the ordeal. While Lynley’s panic tips into paranoia and makes us question her grasp on reality—does Bunny even exist?—Dullea’s glazed cool and dazed smiles make him a little questionable as well. Like Olivier, Preminger conceals his feelings, wielding the camera like a microscope examining the layers of his characters while setting in motion with a choreographer’s grace.

Please note, however, that the prominent billing of the British rock group The Zombies refers only to a rather contrived appearance on a TV screen in the background of one shot and a song playing on a transistor radio in another. They make no actual appearance in the film as such, yet I can’t help but grudgingly respect Preminger’s purely commercial movie. He made films his way, but as his own producer, he was savvy enough to play the promoter.

It’s a gorgeous CinemaScope movie and Twilight Time does the film up nicely, with a strong transfer of a good-looking HD master from Columbia Pictures, a studio with a superb record of preserving, restoring, and making high-quality digital transfers of their catalog. It’s a reminder that black and white films offer a whole new dimension on good-quality Blu-ray releases, not just added sharpness and clarity but a greater depth of gray scale and shading.

The original Twilight Time model was to provide high-quality releases of films from studio vaults in limited edition runs with minimal supplements beyond an isolated score track and a booklet with an essay by house writer Julie Kirgo. Since their launch, however, they have started including featurettes and other supplements from previous DVD releases where possible, and providing original commentary tracks on select releases. This release offers commentary by film historian Lem Dobbs with in-house historians Julie Kirgo and Nick Redman (who also founded the label), a trio that has done more than a few commentary tracks together, and their ease gives the track an easy-going quality as they dig into the film and offer historical and critical perspective. Also includes three trailers.