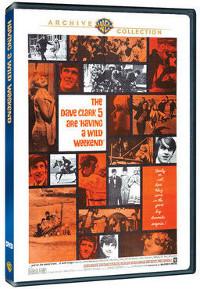 Having a Wild Weekend (Warner Archive), the Dave Clark Five’s answer to A Hard Day’s Night, has a title that suggests the knock-about fun and goofy banter of The Beatles on film. To some extent you’ll find that here. The five boys live in what appears to be, at various times, an old church, an abandoned farmhouse, a run-down manor, and a rummage sale in a school gymnasium (thus the trampoline in the middle of the room), but instead of playing music, they play stunt men and extras in a beef industry ad campaign branded “Meat for Go,” which are conspicuously absent of any actual meat in the ads. What the ads seem to sell is the blond charm of poster girl Dinah (Barbara Ferris) and the puckish spirit of five mod young men leaping goofily around her.

Dave Clark is the ostensible lead as Steve, one of the stunt men and the only member of quintet to get something approaching a distinctive character (the other four boys goof around the margins), and he kicks off the story by driving off the commercial in a sports car with a willing Dinah. She’s the bubbly starlet as free spirit next to Clark’s brooding would-be rebel Steve, but Clark has, shall we say, a deficit of screen presence, let alone personality or charisma. Ferris effortlessly dominates by sheer personality and energy. Maybe that’s why Dave Clark never made another film.

Or maybe it’s because Having a Wild Weekend is not the happy-go-lucky romp the gag-laden opening promises. Along their flight to freedom from the corporate appropriation of youth style for media consumption, they flee British bombs and soldiers who round up hippie squatters like they were enemy combatants, and are taken in by an older couple of swingers who seem poised to seduce the pretty young things. It’s written by playwright Peter Nichols, who brings an edge of social satire and a shadow of existential emptiness to the runaway road movie story. And it’s the directorial debut of John Boorman (of Point Blank, Deliverance, and Excalibur fame), who adds a kind of mod realism to the romp.

Having a Wild Weekend is like the mop top exploitation version of the social drama cinema that was all the rage in the mid-sixties, with a absurdity of modern life and the spiritual death of commercial compromise behind the driving beat and bright guitars of pop rock hits from The Dave Clark Five. Their climactic gesture may be false and heavyhanded (and almost inconsequential, given how little impression Clark and the boys have actually made in the movie as individuals, let alone as any kind of moral compass), but it certainly leaves the film with a sense of unease at the compromises of modern culture.

Available exclusively from Warner Archive: Having a Wild Weekend