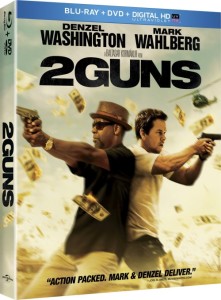 I never saw 2 Guns (Universal, Blu-ray, DVD, On Demand) in theaters. I kind of wish I did, now, having caught up with it on disc with a friend of mine.

The screenplay (based on graphic novel) is silly, mind you, but no more so than most action films today and less so than many, and it’s packed with enough twists and turns and car chases and shoot-outs and explosions to keep the film careening in overdrive. But who knew that Denzel Washington and Mark Wahlberg would make such a fun buddy team without losing the essence of their screen charms? Denzel is wary and cagey, with an easy confidence and a quiet strength that suggests he’s always calculating his options and his odds, while Wahlberg is the earnest, boyish junior partner who throws himself into every situation with unflagging optimism and partner loyalty. They’re freelance crooks who hire out to drug kingpin Edward James Olmos, mind you, but in the company of such a corrupt collection of characters they look pretty good. That’s not the whole story, of course, and I won’t spoil it for you (it’s not all that surprising but it’s more fun to stumble across yourself), just let you know that the bank job they pull to double cross their own boss unleashes a lot of complications very quickly.

We’re not talking about Tarantino cleverness here, mind you, despite the flashback opening and the wise-guy banter, and director Baltasar Kormákur, an Icelandic import who previously directed Wahlberg in Contraband, doesn’t sweat the silliness, or the fact that there aren’t really any good guys to be had here. He just moves it along so fast that you don’t have time to ponder them. It has as runaway energy befitting a plot that seems to be spinning of control of our heroes (if we can call them that) and the energetic charge of seventies drive-in picture with better production values from a director who has a way with staging a set piece for maximum spectacle in minimalist environments.

Details on the supplements here, where you can also enter to win a copy of the Blu-ray+DVD Combo edition from Cinephiled. 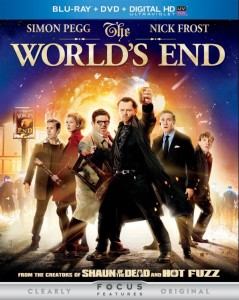 The World’s End (Universal, Blu-ray, DVD, Digital, VOD, On Demand), the third film in the “Cornetto” trilogy by friends and collaborators Edgar Wright (director and co-writer) and Simon Pegg (star and co-writer), is cheeky fun, another offbeat collision of genres, but this one leans heavier on the satire of Pegg’s disappointed loser than on genre satire. Pegg plays the classic BMOC, the popular kid with a gang of followers who peaked in college and never went anywhere once school ended and real life began. Now he wants to simply relive his glory days with his old buddies (Nick Frost, Paddy Considine, Martin Freeman and Eddie Marsan), the former followers who have moved on with their lives and left Pegg behind.

The film lives up to its title, which ostensibly refers to the final drinking establishment in “the golden mile,” a succession of twelve pubs in their old college town. But not too long into their pub crawl the film shifts into something else, a mix of body-snatcher invasion movie and last stand against an insidious invasion (between pints, of course). This is more ambitious than Wright and Pegg’s previous pairings, daring to go a little darker and take on the arrested adolescence and the frustrations of adult accommodation, and it’s far smarter than most of what passes for comedy in theaters today. I still prefer their first two films, with their manic energy and wicked satire, but there’s something surprisingly grounding in this film’s defiant cry of individualism in the face of conformity.