Film history is filled with legends and stories of what could have been great (or at least interesting) films but were never made for one reason or another. Such projects are all potential, giving fans the chance to dream of masterpieces that could have been without having to face the reality of compromise and transformation that happens in the real world of production. The documentary of the film that was never made is something of a recent phenomenon. Films like It’s All True, based on an unfinished film by Orson Welles (1993), Lost in La Mancha (2002) (about Terry Gilliam’s Don Quixote), and Henri-Georges Clouzot’s Inferno (2009) mourn what could have been but there is also something romantic in these grand, unrealized visions, of the filmmaker as Don Quixote taking on the studio windmills.

Few dreams are as grand as the adaptation of Frank Herbert’s Dune that was developed by Alejandro Jodorowsky, the creator of El Topo (1970), the original midnight movie, and The Holy Mountain (1973), two movies that mix myth, spiritualism, primal violence, and surreal imagery. These low budget films were underground success stories, playing to small but passionate audiences and achieving cult status, and Jodorowsky planned to follow them up with an epic far bigger and more ambitious than anything he had ever attempted before. 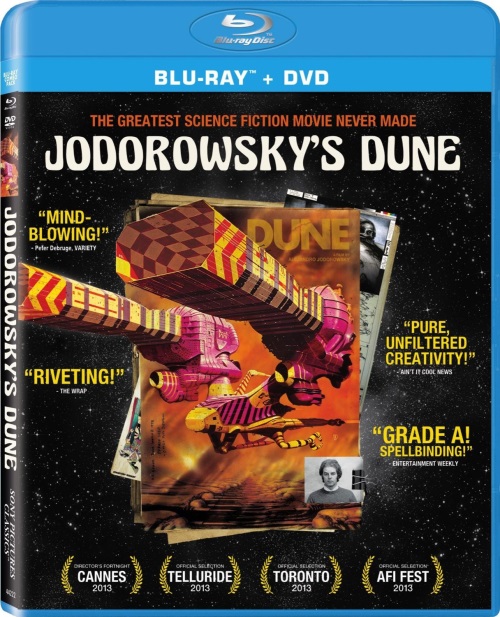 Jodorowsky’s Dune (Sony, Blu-ray+DVD Combo, Cable VOD) is probably not “the greatest science film never made,” as the movie poster tagline insists, but this journey through the most improbable screen epic embarked upon in the seventies isn’t really about mourning what could have been. Alejandro Jodorowsky, director of the aggressively trippy cult classics El Topo and The Holy Mountain, is a spellbinder of a storyteller and it’s not hard to get caught up in the vision he spins of his dream adaptation of the Frank Herbert novel, which he and his producer, Michel Seydoux, managed to option. With his artistic idealism and beaming smile (the man lights up with creative energy whenever he starts describing his vision of the film), Jodorowsky’s enthusiasm is intoxicating. It’s no wonder he attracted such a passionately loyal and dedicated team of collaborators—his “warriors,” as he called them—along the way, including artists Jean “Moebius” Girard, H.R. Giger and Chris Foss, special effects designer Dan O’Bannon, and actors Orson Welles, Mick Jagger and Salvador Dali.

If filmmaker Frank Pavich gets caught up in the dreams of the Jodorowsky and his warriors and the hyperbole of commentators like Richard Stanley and Nicolas Winding Refn, filmmakers who proclaim the project some kind of lost masterpiece so visionary that Hollywood was scared of the possibilities, he at least gives voice to the more measured response of the Hollywood studios via producer Gary Kurtz. Any practical look at the project finds a rickety foundation built on promises rather than contracts, a budget insufficient to meet the scope of Jodorowsky’s ideas, and elaborate special effects beyond anything Hollywood would accomplish for years to come. And that doesn’t even address Jodorowsky’s utter dismissal of studio concerns of his ability to create a commercial film for the millions of dollars he was asking for. He was ready to make a 12-hour epic if that’s what his muse demanded.

What’s most interesting is not that the project failed to get made but that it got as far as it did and Jodorowsky and Pavich let us revel in the conceptual art, costume and character designs, storyboards, musical concepts and other elements that Jodorowsky pulled together for his presentation. He gives us an art movie of a space opera with a spiritual message and a mad poetry to its execution. And rather than treat this as a wake for a stillborn film (as many of the interview subjects do), Jodorowsky celebrates the entire endeavor as a creative effort in its own right, which inspired ideas that he used in other projects. It’s unlikely that he could have brought to the screen anything resembling the grand vision he shares with us given his resources and the technology of the era, but it sure is exciting it imagine, and that imagination is what powers the film: the sense of artistic freedom, idealism, freewheeling creativity at work in the preparation, and the excitement he raised in his warriors, inspiring them to imagine beyond what had been done before. That is a work of art in its own right.

The Blu-ray+DVD Combo also includes 46 minutes of deleted scenes, or rather expanded sections that explore elements of the project in more detail than the finished film allows.

Bring on the legless dwarfs, cue the full-frontal nudity, and pass the peyote: Alejandro Jodorowsky has made a new movie. Born in 1929, Jodorowsky was already a veteran of wigged-out experimental theater when he devised El Topo (1970) and The Holy Mountain (1973), films that crammed together intense violence, spiritual searching, and preposterous grotesquerie—guaranteeing their success as counterculture happenings. (Jodorowsky essentially invented the midnight-movie phenomenon.) He nearly made an epic of Frank Herbert’s Dune, a misadventure chronicled in the recent documentary Jodorowsky’s Dune. Many years past his last feature, here’s The Dance of Reality, an autobiographical look at the filmmaker’s youth in small-town Chile. There’s something almost heartwarming about the fact that this movie is—for all its zaniness—almost a normal film.

A student of Marcel Marceau in Paris, a founder of the surrealist theater Panic Movement in Mexico City, a Zen Buddhist, playwright and comic strip author, the Chilean-born Alejandro Jodorowsky made his fame as a cult film director with his sprawling, symbolic, surreal films El Topo and The Holy Mountain, brutal and strange allegorical odysseys written and directed by and starring Jodorowsky that became staples on the midnight movie circuit and artifacts of the head film culture. They are also crude and grotesque productions that revel in the metaphysical mix of the sacred and the profane.

Santa Sangre was made more than fifteen years after The Holy Mountain (and after the collapse of his attempt to bring Dune to the screen”) and his skills as a filmmaker and storyteller have improved with time. Whether or not this is the most accessible of Jodorwsky’s films (he also dabbled in more mainstream filmmaking), it is certainly the most accessible “Jodorowksy film,” a vision filled with circus imagery, surreal scenes, grotesque violence and psycho-sexual trauma. The director casts two of his sons as Fenix, his mad protagonist—Axel Jodorowsky as the grown man (introduced as an inmate in an asylum, regressed to savage behavior and pre-verbal existence) and Adan Jodorowsky as the young boy (a junior circus magician in tux and fake mustache watching the grotesque conduct of adults around him)—and then sends us into the psychodrama that sent him to the asylum. In flashback we watch his alcoholic brute of father (Guy Stockwell in slobbering degenerate mode) take time out of his knife-throwing act to seduce the voluptuous tattooed lady and his tempestuous trapeze artist mother (Blanca Guerra, all burning eyes and hissing fury) take her vengeance in a particularly personal way. In the present, he is drawn into the urban world for a field trip and wanders off to his waiting mother, who has plans to use his arms as the instruments of her continued revenge. Think of it as Jodorowsky’s Psycho by way of Fellini on shrooms.