It takes chutzpah to monkey with Orson Welles, even for the best of reasons, and without a doubt this unprecedented revision of Touch of Evil was undertaken with the best intentions. While I can quibble with a few details, the result is a remarkable success. Forty years after the fact, producer Rick Schmidlin and Oscar winning film and sound editor Walter Murch have given Welles his due and made Touch of Evil into the film he wanted to make.

END_OF_DOCUMENT_TOKEN_TO_BE_REPLACED 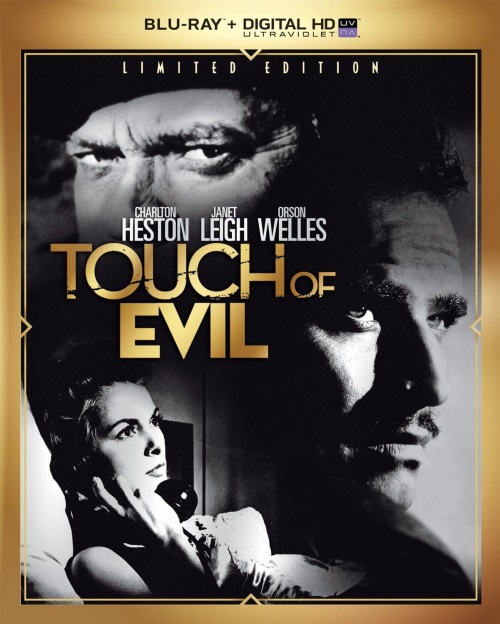 Touch of Evil (Universal, Blu-ray) – Orson Welles’ baroque border town murder mystery is a wild masterpiece, a sleazy, grimy, jittery, and ultimately dazzling work of cinematic magic. It’s considered the last great film noir and the bookend to the true noir era. It was also Welles’s last attempt at a career in Hollywood before he packed up to make movies in Europe.

Charlton Heston is a stiff, straight-arrow Mexican government agent Mike Vargas whose planned honeymoon with his American bride Susie (Janet Leigh) is derailed by a sensationalistic murder and police detective Hank Quinlan (Orson Welles), a bloated, blustery grotesque with a doughy face and an ill manner who has a habit of creating evidence to speed the process of justice. It features Akin Tamiroff as a Mexican border town Little Caesar with a cheap toupee and a wise-guy patter, Dennis Weaver as a sex-obsessed motel clerk on the verge of a nervous breakdown, a guest appearance by Marlene Dietrich and cameos by Welles regulars Ray Collins and Joseph Cotten.

After studio executives viewed Welles’ work in progress in 1957, the film was taken from Welles and recut into a 109-minute version that was previewed for audiences. Welles viewed the studio’s rough cut and wrote a detailed 58 page memo describing the changes he felt needed to be made to save the film. Some of those suggestions were incorporated in the final cut, most were not, and it was subsequently edited down to the 96-minute version that was released in 1958. The “preview version” was discovered in 1976 and supplanted the release version, but while it feature more footage directed by Welles, it was not his cut of the film.

Jonathan Rosenbaum discovered Welles’ memo in the files of Universal Studios and published it in the 1990s and in 1998 he became an advisor to producer Rick Schmidlin and editor Walter Murch as they took on an unprecedented project: reconstructing the version that Welles described. Though referred to as the “restored version,” it’s in fact an entirely new version: “(A)n academic example of what Welles intended,” is how Schmidlin described it.

The differences in this revision are apparent in the first seconds of the film. The studio threw credits over the famous opening crane shot and set it to a brassy theme song from composer Henry Mancini but Welles (ever the pioneer) meant the scene to open the film as a dramatic sequence. By removing the credits and revealing Welles’ dense sound design, previously buried by the music, we find a riveting scene with a completely different sensibility and dynamic. Anyone who grew up on the earlier versions still feel a gang of loss; that bongo beat and the growling horns had become a part of the familiar experience, so married to the image it seemed inseparable. But as the camera follows the parallel journeys of the car (carrying a ticking bomb) and the strolling newlywed couple (Heston and Leigh) as they weave their way through the bustling Mexican border town, the rediscovered soundtrack (with musical additions by Murch as per Welles’ instructions) gives a specific sense of place of movement with its street sounds competing with car radios and nightclub music weaving in and out of the mix.

With the abrupt explosion, Welles’ style becomes more expressionistic—looming low angles, jittery handheld shots, edgy editing—and the new cutting design outlined by Welles serves this style better. The subsequent scenes are tightened up with insistent intercutting between the Vargas/Quinlan confrontations on the American side of the border and Susie’s run-in with racketeer “Uncle Joe” Grandi (Tamiroff) in Mexico. It creates a driving pace with a greater sense of urgency and tension, but it also weaves their stories together more insistently. The subsequent changes are less obvious (a trim here, an insert there, a couple of short scenes cut) but this cut also restores another, less obvious element to the original intentions.

For decades Touch of Evil was shown in theaters and on home video in the Academy ratio of 1.33:1, the boxy format of old Hollywood and old TV, but it was shot and framed to be screened at 1:85:1, the standard format by the late 1950s. The 1998 theatrical release and subsequent disc editions restored the film to its correct ratio (rounded down to 16×9 for disc). Compositions became more dramatic, framed more tightly around Welles’ groupings. The long-takes in Sanchez’s apartment feel more claustrophobic, without so much of the expanse of the blank ceiling open above their heads. The characters dominate the frame with more presence. Despite the documentation in the production records and the film elements itself that verify this change, it’s become a controversy among fans and historians, perhaps because of years of familiarity with the old format, perhaps because they prefer the open-frame roominess, a la Citizen Kane. I’m on the widescreen camp: the framing serves this film better and the visual schemes were taken up in Welles’ next widescreen film, The Trial. In Britain, both the Academy and widescreen versions were include on the DVD and Blu-ray editions. Here it’s just the widescreen.

Universal releases all three existing cuts of the film in a special edition for its Blu-ray debut, just like it did for the DVD special edition. It is a package worthy of Criterion. It’s been remastered from original 35mm elements for Blu-ray and looks amazing, and it features the four commentary tracks spread over the three versions recorded for the DVD set. Project producer Rick Schmidlin hosts a track with stars Charlton Heston and Janet Leigh, with Schmidlin commenting on the changes in the “restored version” and drawing production stories and experiences from the stars, and he also contributes a solo track, both for the reconstructed version. Welles historian / project consultant Jonathan Rosenbaum and fellow Welles historian James Naremore discuss the “preview version” with a mix of production details and interpretations, and film critic F.X. Feeney offers a solo track on the shorter theatrical release. Also includes the featurettes “Bringing Evil to Life” (one on the making of the film) and “Evil Lost and Found” (on the history of the various versions and the process of reconstructing the new cut) and a reproduction of the original 58-page memo that inspired the entire project. Also features an UltraViolet digital copy for download and instant streaming.

For more, see my essay “The Making, Unmaking and Reclamation of Touch of Evil.” 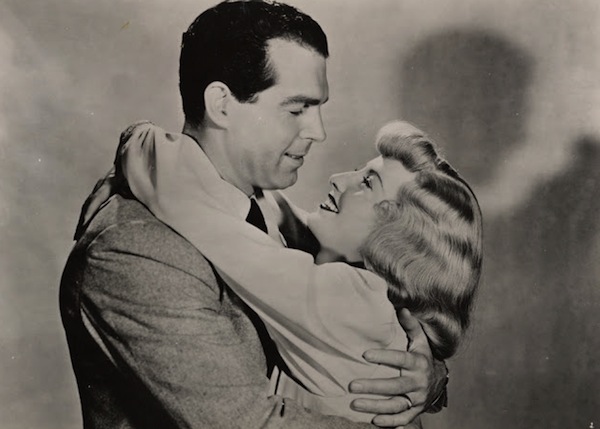 Universal debuts another film noir masterpiece on Blu-ray: Double Indemnity (Universal, Blu-ray), the 1944 classic that codified the moral depravity and sexual charge of film noir at its most cynical. Billy Wilder shocked audiences and tweaked the morality watchdogs with this ruthless adaptation of James M. Cain’s notorious novel, creating one of the touchstone films noir in process.

Barbara Stanwyck is perfectly heartless as the icy adulteress who plants the seeds of murder in the mind of Fred MacMurray’s conniving insurance agent. He plots the cold-blooded murder of her rich husband, only to discover that sharing a murder does not necessarily bring lovers closer together. Edward G. Robinson’s persistent investigator Keys brings the only real warmth to this chilly film noir; his relationship to MacMurray is the closest this film comes to real love. The rest is simply fatal attraction. The masterpiece of film noir double dealing was nominated for 7 Academy Awards, including Best Picture, Best Director, Best Screenplay (co-written by Wilder with Raymond Chandler), Best Actress (Stanwyck), and Best Cinematography (for John Seitz’s cool, crisp, shadowy imagery), but it was just a little too cynical and sour to win anything in that era.

This is also newly remastered and includes the supplements from the earlier DVD special edition: two commentary tracks (on by film historian Richard Schickel, one by film historian / screenwriter Lem Dobbs and film historian Nick Redman), the featurette “Shadows of Suspense,” an introduction by Turner Classic Movies host Robert Osborne, and the 1973 TV-movie remake starring Richard Crenna in the MacMurray role, Samantha Eggar as the seductive Phyllis, and Lee J. Cobb as the insurance boss Keys. Also features an UltraViolet digital copy for download and instant streaming.