Ken Eisler was a friend of MOVIETONE NEWS from the spring of 1973, when he dropped down from his Vancouver, B.C. home for a few days and happened on some back issues while browsing in a Capitol Hill bookstore. He wrote us a flattering note (MTN 24), and swiftly became both a regular Contributing Writer (his MTN 29 quickie of Aguirre, the Wrath of God, written after a Mexico City viewing, may well have been the first English-language notice of that masterpiece) and a personal friend. In 1976 Ken relocated in Seattle and began participating in Seattle Film Society activities; he was elected to the SFS Board of Directors in 1977. Then, changes in work and life schedules forced him to step down from the Board, and prevented him from maintaining the constancy of contact we—and his MTN readers—might have wished for. Ken died early in the morning of April 24, 1978. Only a few days before, he had sent us this, his first writing for MOVIETONE NEWS in nearly a year. [—RTJ]

“Shut it down!” the university students used to chant. The image of a factory being shut down is conveyed in Coup pour coupby a series of quick cuts breathtaking in their economy. What’s more extraordinary about this seven-year-old film, screened here recently on the UW campus as an International Women’s Day event, is its success in conveying the ebb and flow of life within the worker-occupied factory after the shutdown. The filmmakers haven’t confined themselves to any single technique or point of view in doing this. Sometimes we see things “objectively” from a narrative vantage: we watch the women, inside the factory, preparing to repel a police onslaught, or giving complicated baby-care instructions at the padlocked front gate to hapless husbands (“…and then you can have your morning coffee!”), or finally—in disgust at the husbands’ grumbling ineptitude—setting up their own daycare center in what may have been the boardroom. In a very affecting passage a young woman who was first seen arriving home after a long demeaning day’s work—trudging up the steps with her pesky kids, glumly settling herself and them into the routines of another solitary apartment-pent night—is now seen sitting relaxed and happy against a wall, her thoughts spoken on the soundtrack (“Before this, it was ‘hullo, g’bye’ … I was nothing…”). Once in a while a camera placement or movement makes a particularly privileged point, as when the deadly repressive routine of the factory assembly line is broken by a young woman’s desperate outburst (a “nervous fit,” the foreman calls it), and the supervisory people’s angry attempts at restraint only add fuel to her fire. Other women cease work and come away from their machines to gather around the young woman in distress, pushing the supervisors out of the way. When their sympathy and support have calmed her baffled rage, the group, with her in the center, moves off laterally across and out of the frame. The camera remains where it is, though, so we’re left looking at who was behind that warm, turbulent group: “Sourpuss,” the female foreman with the pinched, angry face and unyielding posture. The continuity of the narrative is broken by songs, too. In one sequence the factory women joyfully improvise a cabaret song about their working conditions, the struggle, the boss, their husbands—their lives. The impromptu rhymed words are funny and revealing; and the hesitant or bold, quick or slow style in which contributions are made sometimes reinforces, sometimes changes our notion (and their own) of their personalities. Ã‰lodie, the oldest worker, has already shown an unexpected glint of malicious mischief in dealing with the foreman “Sourpuss.” In an Agincourt-flavored night scene before the police attack, she flowers into a wonderful old song celebrating the joys of tobacco, delighting the other women and then following up with some historical perspective on the present action, at their request, via reminiscences of a legendary 1936 strike.

What we’re watching is a film about that potentially clichéd subject, the raising of consciousness. Factory boss Boursac does make a satisfyingly Eisensteinian target for a “militant” film, with his tinted glasses, his ramrod pride, his deviousness, his black suit and homburg; and it’s peculiarly gratifying to see him standing frozen-faced, surrounded by gleefully disrespectful women workers in the cage of an old-fashioned cable-drawn barred elevator or a glass enclosure where, a hungry hostage with a bursting bladder, he’s taunted by the very barbarians his supervisory minions customarily surveyed coldly (time-is-money) from their glass-enclosed eyries. But it’s the changes in the women’s sense of themselves that really count here: changes in perspective. And from this point of view the most mysteriously moving shots in the film are those recurrent high-angle, distant views of the factory itself, set against town and countryside: late-afternoon sun glinting off blank windows … a bird flying across the frame … smoke rising languorously from chimneys. These Ozu-like scenes are palpably held for a certain number of beats, in utter silence save for the subdued rhythmic, motivic clicking of the now-stilled machines and, sometimes, a quietly ongoing music as serenely detached yet curiously stirring as that of Herzog’s own beloved transcendental Popol Vuh.

COUP POUR COUP
Direction: Marin Karmitz. Professional filmmakers, workers, students, and actors—almost 100 people in all—cooperated on the making of the film (all were paid the same salary). 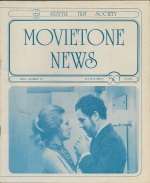 Something was missing in Film Year 1974 and I’ve never been able to isolate quite what it is. There were good films in town; I wrote down more than 40 titles before starting to rank anything, and they cover a broad range of style, subject matter, country of origin, production values, acting achievements, filmmakers new, old, and new-old. Very early in the year several Seattle Film Society premieres set standards of both excellence and originality that seemed hard to beat, and only two subsequent films managed to beat them, for my money. Those early excellences hung over the year, and so did carryovers from 1973, as always in this Northwest outpost. Such factors help create a sense of END_OF_DOCUMENT_TOKEN_TO_BE_REPLACED