Charlotte has no close friends (at least that we see), lives in a sleek modern apartment devoid of lived-in warmth, and shrinks from the touch of her pilot husband Pierre (Philippe Leroy). He’s an intellectual with a condescending attitude and she’s more comfortable living in the moment than grappling with history and memory, which becomes all too apparent in their uncomfortable post-dinner dialogue. In between the lovemaking and the conversations, Charlotte discovers she is pregnant. She doesn’t know which man is the father

It is one of Godard’s most visually handsome films, even while it becomes a study in alienation and disconnection. Advertising images, logos, newspaper headlines, and scraps of text fill the film. Lingerie ads are found in every magazine she peruses and loom over her from massive billboards and the sides of buildings as she walks the streets, reducing women to their sexuality. She’s practically a commodity herself (the ideal of woman as seen in the ads) desired by her husband in a marriage disintegrating out of a lack of communication and her lover in an affair from which she is increasingly detached. She’s so alienated from her life that she does not seem to realize how unhappy she is.

A Married Woman has since been overshadowed by Godard’s more overtly political and confrontational films, such as Vivre sa vie and Weekend, and playful genre exercises like A bande a parte and Pierrot le fou, yet at the time it was a cause célèbre in France when the censorship board banned the film until Godard made minor changes and it became one of the most financially successful films of his career. Charlotte is a product of her environment, giving in to her consumerist impulses driven by the cacophony of advertising around her, but his feeling for Charlotte is genuine—few of his movies evince such emotional sympathy—and his criticism of consumer culture is part of her story.

Comes to Blu-ray and DVD in a new restoration from the original negative. It’s sharp and clean and beautiful black-and-white. The new release features a 30-minute interview with star Macha Méril and interviews with contemporary fashion designer and film producer Agnes B. and Godard scholar Antoine de Baecque, all recorded in 2010 for the British Masters of Cinema release, plus original rerelease trailers of the film. The film and the bonus interviews are in French with English subtitles and there is a bonus 8-page booklet with stills from the film. 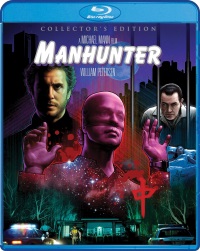 Manhunter (Shout! Factory, Blu-ray), Michael Mann’s film of Thomas Harris’ novel, is doomed to live in the shadow of the Oscar winningSilence of the Lambs, its sequel in essence if not detail. An undeserved fate for such a sharp, coolly attenuated thriller. William Petersen is haunted but precise as the intent, troubled serial killer profiler whose methods literally lead to madness and is, frankly, a more insidiously scary Hannibal Lektor (as his name is spelled in his original cinematic incarnation) than Anthony Hopkin’s more theatrical take. Mann’s direction is a triumph of austerity and cinematic precision, and he shatters the carefully controlled mood in a blistering climax choreographed and cut to Iron Butterfly’s “In-A-Gadda-Da-Vida.” The “Director’s Cut” features an additions 5 minutes of detail. It was remade under the novel’s title, Red Dragon, with Hopkins as Lector, but it doesn’t hold a candle to this. The two-disc set features the original theatrical cut in HD and the Director’s Cut with alternate footage in standard definition and a commentary track by Michael Mann from a previous release. It features a 40-minute interview with Brian Cox, newly-recorded interviews with actors William Petersen, Joan Allen, and Tom Noonan, director of photography Dante Spinotti, and composer Michel Rubin and soundtrack contributors Barry Andrews, Gary Putnam, Rick Shaffer, and Gene Stashuk, and archival interviews with actors William Petersen, Joan Allen, Brian Cox, and Tom Noonan and director of photography Dante Spinotti.

Buster Keaton: The Shorts Collection 1917-1923 (Kino, Blu-ray, DVD) features the short films Keaton made with Fatty Arbuckle, the first director to direct Keaton, and all 19 short comedies made by Keaton between 1920 and 1923. Keaton always cited Arbuckle as his early mentor and you can find the seeds of Keaton’s style in Arbuckle’s assured, meticulously constructed final collaborations. The 19 shorts that Keaton made between 1920 and 1923 are, along with Charlie Chaplin’s Mutual comedies, the peak of creativity, ingenuity and comic grace in American silent comedy shorts. Though he did not take director credit for these films (or, for that matter, many of his feature), he was the creative artist behind every aspect of the production, including the direction. I haven’t seen this set but it features restorations by Lobster Films in Paris, an alternate version of “The Blacksmith” with new material, and alternate endings to two Arbuckle shorts.