When one site offers two articles of note, I usually try to yoke them with a shared theme. Sometimes they make it easy (see the next entry), and sometimes Criterion has Amy Taubin on the prescience of sex, lies, and videotape on our current mediated intimacy and the future outline of Steven Soderbergh’s career (“In fact, there is barely any nudity, and the sex scenes are so elliptically edited that they are more exciting for what we don’t see than for what we do. And yet sex, lies, and videotape is something of a skin flick. Soderbergh often frames the two central characters, Ann (Andie MacDowell) and Graham (James Spader), in extremely tight close-ups, held long enough for the skin of their faces to become naked indexes of their inner lives. They blush, they sweat. We know what their cheeks would feel like if we were to touch them with our fingers as we do with our eyes. I’ve never seen—before or since—skin that alive in a movie.”); and Nick Pinkerton on the pleasures of seeing Giuliano Montaldo and his cast (Cassavetes, Falk, Rowland, Britt Ekland) rub against the grain of genre conventions in Machine Gun McCain. (“The movie’s locations, like its cast, are an ungainly mix. The exteriors testify to the fact that the Italian crew shot quite extensively in the States: The movie opens in rather uninspired fashion looking south down Park Avenue, and contains views of the streets and back alleys of New York, Vegas, Los Angeles, and San Francisco—particularly the strip joints on Telegraph Hill. […] Interiors, on the other hand, were largely shot in Rome’s Incir-De Paolis and Dear Studios, and with these the documentary impulse is abandoned for theatrical gel-splashed impressionism—see the lemony yellow light of the Vegas hotel where Adamo goes to lean on a casino boss, or the red of the go-go bar where McCain picks up his new ladyfriend after dropping another would-be Romeo with a flat of the palm to the dome.”) In which case all I can offer is, here you go.

Movie culture dies twice over at Mubi: lugubriously and with a willful lack of kick to its perversity in Greg Cwik’s take on Paul Schrader’s The Canyons (“These are parasitic creatures, entitled and idiotic, so narcissistic even their sex feels cold. (Ellis has called the film “cold and dead,” because it is about cold and dead characters.) The Canyons is salacious but unsexy, an erotic film that turns you off. Characters are demarcated by who they fuck, by who they want to fuck, by who they fuck over; they are devoid of any semblance of morals or psychology, and this interior vacuity is, again, part of the film’s epochal allure.”); in frenzied, disjointed, typically essayistic fashion in Godard’s The Rise and Fall of a Small Film Company, as seen by Jeremy Carr. (“But Grandeur et décadence is exceptional in that the incessant variety of pictorial means (the discordant cutting, the obstinate camera placement, the layered dissolves, etc.) seems to reflect the high-strung sensibilities of the film’s primary characters, as they likewise struggle to balance compound details in a way that is somber and frantic, constantly theatrical, and ultimately laughable. It’s a haggling strain for all involved, and Godard renders that exertion in the film’s own hysterical constitution.”).

“Any given piece of criticism about [Symbiopsychotaxiplasm: Take One] could choose to focus on one of the variety of dynamics or ideas that plays out, and I should know: this is the fourth time I’ve written about it over the past decade-plus in various places. So why go back to this endlessly replenishing well yet again? Because of all the inroads I’ve made into the film—my previous articles have been about, in order, the centrality of its 16mm camera and sound equipment, the rich diversity of its Central Park shooting location, and the sly racial politics that emerge via the performance of its director-star—I have yet to talk about Symbiopsychotaxiplasm’s odd, complicated, and endlessly amusing discussions around sexuality and specifically homosexuality.” Michael Koresky folds William Greaves’s “daring—and daringly nonchalant—whatsit” into the history of Queer Cinema for its interrogation of gender and performance, and for its remarkable found object, the fey homeless man Victor, who strolls in, and away, with the film in its final stretch.

“Yesterday, I shot deer, mountain sheep, zebra, gnu, elk, antelope, hartebeest, ostrich and swan. I shot them all within the space of an hour and within four minutes walk of this office! […] Ah, now you begin to see! Certainly, it was in the movies! […] Shooting the movies is an exciting sport, and it should have a strong appeal for all sportsmen.” Michael Cowen unearths the history of cinematic shooting galleries, a popular attraction in the early days of movies that required a handful of technical innovations to pull off—though not a new mindset, as Cowen shows the game a logical outgrowth of, among other factors, that mix of armchair imperialism and self-aggrandizing conservationism that had already made the travel film and the hunting safari so popular. Via David Hudson.

“Van Damme certainly grandstanded around the set—he let everyone know who the star was…. He’d stay in the trailer until he was ready to come out; he’d take up so much time for a shot; scenes that should have only taken an hour could take half a day. But for some reason, perhaps because we played best mates in the movie, he was fine with me. We went to dinner, we hung out, he gave me my first proper Cuban cigar. One day, we were sitting in the makeup chairs and he said to me: ‘Robert, you have the stink of Tony Curtis.’ I think he meant ‘essence’.” So it has come to this: Keith Stuart provides us an oral history of the making of Street Fighter, a tale more bombastically entertaining than the movie ever was—full of budget slashes, cast members frustrated by lack of preparation or even explanation of their characters, a movie star doing his movie star thing and a beloved character actor hamming it up delightfully through the pain of his ultimately fatal stomach cancer.

“The woman comes across as intense, intelligent and authoritative. Her rapid-fire speech is delivered smoothly and without any hint of deception. ‘This woman learns everything there is to know about her targets,’ says [corporate investigator] Kotsianas. “She tweaks her voice and accent and sounds like who she is impersonating. That’s why she’s been able to fool as many people as she has.” The photographer eventually compared her voice to publicly available recordings of the real Pascal. He found them to be eerily similar—a blend of New York and Midwestern accents. The only thing missing was the slight lisp of the real Pascal.” Scott Johnson reports on an Indonesian-based scam working its way through Hollywood, sending would-be filmmakers to the country and paying out thousands of dollars out of pocket after a skillful con artist convinces them they’ve received a call from the likes of Amy Pascal, Sherry Lansing, or Lesli Linka Glatter, the woman caller initially offering praise but becoming increasingly demanding, belligerent, and sexually aggressive as the calls continue. Shockingly, none of this behavior provided the tip-off to the victims that they weren’t dealing with movie studio big shots. 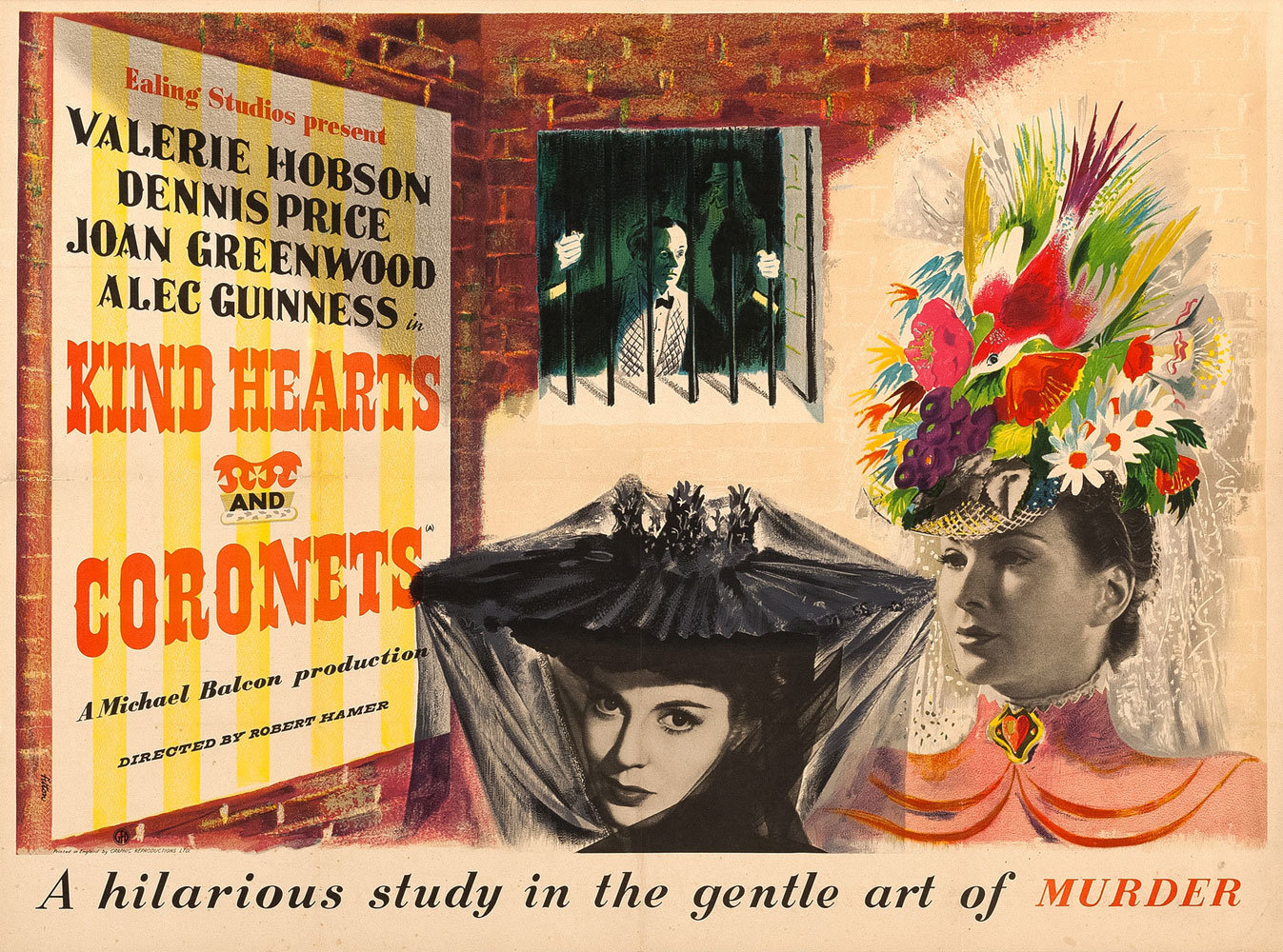 Adrian Curry’s gallery of posters for Kind Hearts and Coronets isn’t strong on visual design (though there’s so delightful witty caricature), but as Curry himself points out it’s kind of fascinating to see the original marketing scheme was focused on Dennis Price, before he was rightfully eclipsed by images of Guinness’s multiple D’Ascoynes.

British-born costume designer Yvonne Blake won the Academy Award for her work on the historical epic Nicholas and Alexandra (1971) and a nomination for The Four Musketeers (1976). She also designed costumes for Jesus Christ Superstar (1973), Robin and Marian (1976), Superman (1978), What Dreams May Come (1998), and Goya’s Ghosts (2006). She died at 78 at her home in Spain. Rhett Bartlett for The Hollywood Reporter.