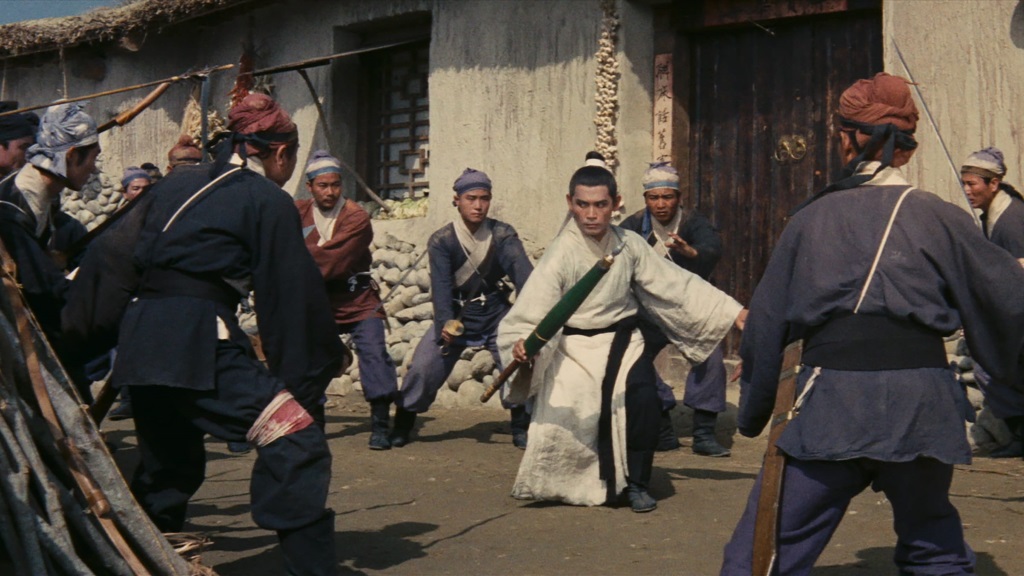 “Clocking in at almost twenty minutes, this sequence unfolds within the confines of the inn, showcasing what the director can accomplish in such a stage-bound setting. Without sacrificing precision, Hu switches up his approach, alternating between stretches of languor and frantic motion, between long shots that map out zones of brewing tension and close-ups that relay the information being exchanged in the characters’ gazes. But it is Shih, with his spooky saucer eyes, who gives the section its steady pulse. His inner stillness is a blank slate onto which any mood can be projected, allowing a scene to pivot nimbly between levity and dread. Playing a character on whom nothing is lost, he’s the on-screen embodiment of what Hu sets out to create with the nuts and bolts of his film grammar: a heightened watchfulness operating underneath a tightly controlled surface.” Andrew Chan offers an introduction to the rigorous, restrained King Hu masterpiece Dragon Inn.

At Cinema Scope, a pair of looks back to interesting oddities and the times that made them. Kelly Dong recounts the bizarre intertwining of sex and death—and the incessant censorship troubles that followed—in the ‘70s collaborations of director Kim Ki-young and actress Lee Hwa-si. (“Like the women in the Housemaid trilogy, Lee’s characters are consumed by the contradictory urges to destroy men and to attain security by becoming their wives or lovers. But while those earlier films (each of which concludes with the housemaid’s murder-suicide) suggest that women’s inability to reconcile these paradoxical impulses accelerates their self-destruction as a social class, Lee’s characters constitute a rebuttal: here, opacity becomes a tool for women’s survival.”) And Adam Nayman remembers the marvelous thriller The Silent Partner—along with the Canadian tax laws that both enabled its making and seem to be mocked by the skim-from-the-robber scheme of the film’s protagonist. (“The Silent Partner makes less of an overt fuss about its setting  [than contemporary Toronto thriller The Kidnapping of the President], but nevertheless gets at something truer and more ominous about Toronto circa the late ’70s— specifically, the covetous late-capitalist mentality building up in the skyscraping shadow of the CN Tower. “Money, money, money…stacks of bills…handfuls of coins.” So reads the first line of Hanson’s screenplay, which craftily adapts Anders Bodelsen’s novel about a bank robbery that ends up resulting in two simultaneous heists, one deftly obscured by the other.”)

“Ideal romantic love can’t be shown to continue into marriage. If it does, it is transformed into the alternative pillar of our sexual ideology, the Family, habitually presented as in conflict with romance. One might sum up the problem confronting the Astaire-Rogers scriptwriters as: How to keep Fred and Ginger from getting married for between ninety and one hundred minutes of screen time?” Film Comment reposts a classic 1979 essay by Robin Wood tackling the unstated ideologies—racial, sexual, and romantic—underlying the Astaire-Rogers films with a perception and elegance absent in too many clumsy political readings of populist entertainment.

“What do you have on your mind?” “You, Jabez Stone. You and a lot of poor farmers hereabouts, all good men of the earth and in trouble because of you. Or am I wrong about those contracts?” “Without me and my money they wouldn’t have anything.” “They’d have a good neighbor—and that’s worth more than anything else. Much, much more.” Considering the changes made to expand the story to feature length, Jeff Smith accords Dieterle’s The Devil and Daniel Webster a more expansive vision than it’s generally accredited, looking back to German Expressionism, forward to noir, and outward to the world to make a timely plea for collectivism.

“Each instrument is given equal weight within the score; no sonority dominates. Furthermore, the instruments are seldom heard all at once, which garners a predominantly sparse compositional texture. This curious amalgam of wind, brass, and string timbres blend together to create an eerie sonic palette, and the unusual timbral combination is heightened further through Fusco often exploiting the extremes of instrumental pitch range. Fusco’s unique sound world works alongside Michio Takahashi and Sacha Vierny’s striking cinematography, feeding off of the images onscreen and inhabiting them, living through them, with a restraint that seems almost indifferent to the emotional needs of Hiroshima, mon amour’s viewer/listeners.” Of all the strikingly modernist touches used expertly in Resnais’s debut, not the least, Clare Nina Norelli reminds us, is Giovanni Fusco’s original score.

“Is art ever truly contained? Is it ever safe? Art is not a toy, a fashion statement, a decoration. Art is inherently disruptive. Art is dangerous. It can explode in your face. Not that art can be a crime; art must be a crime. In my formulation, there is a need for art to be under the radar, criminal, subliminal. Constant as the society above it changes. Art is Notes from Underground. That is the strategy of criminal art.” Against a growing tide of calls for art in these times to be responsible and attuned to the politics and emotions that better us, David Cronenberg took the opportunity after receiving an honorary degree to speak passionately for the necessity of social irresponsibility—of the outright criminal, in his phrasing—in art, and to work out a fascinating new variation on his great theme of the body mutating.

“And you know people used the word, oh, is the character “sympathetic.” That’s something I’ve run up against a lot in the past 30 years. To me, I wanted her to be interesting, I wanted her to be compelling. Did I want her to be “nice”? Not necessarily. I wanted her not to be totally distasteful! But sympathetic, to me is somebody that you get invested in, that was important, you’re interested to see what’s going to happen to her. And not so much that there’s a kind of pat, oh she’s nice or she deserved that. I didn’t want to make a moral judgment.” Susan Seidelman talks with Jason Bailey about capturing the ‘80s New York zeitgeist in her first two features, Smithereens and Desperately Seeing Susan.

Tab Hunter, molded as a Hollywood beefcake in the Rock Hudson mold in the 1950s, saw his career crater and then get a second life in the 1980s thanks to John Waters and Hunter’s ability to lampoon his heartthrob image. It was also when Hunter came out of the closet and embraced his identity as a gay man. Born Arthur Kelm, he was dubbed Tab Hunter by Rock Hudson’s agent, who saw potential in his strapping good looks, and made his feature debut in a small role in The Lawless (1950). The graduated to bigger parts in films like Track of the Cat (1954) and Battle Cry (1954), which was his breakthrough performance. He starred in The Burning Hills (1956) and The Girl He Left Behind (1956) opposite Natalie Wood (the studios promoted them as a couple), William Wellman’s World War I drama Lafayette Escadrille (1958), Phil Karlson’s Gunman’s Walk (1958), the musical Damn Yankees (1958), and They Came to Cordura (1959), was the lead in his own short-lived sitcom The Tab Hunter Show (1960-1961), and recorded a number of hit records. He turned increasingly to TV and smaller movies and spent much of the 1970s working in dinner theater, when John Waters cast him opposite Divine in the satirical Polyester (1981). Hunter enjoyed spoofing his image and reteamed with Divine in Lust in the Dust (1985). After a few more roles, he retired from performing in the early 1990s and wrote of his life and his loves as a gay man in Hollywood in his 2005 autobiography Tab Hunter Confidential (later made into a documentary narrated by Hunter). He passed away at the age of 86. More from Aljean Harmetz for The New York Times.