“The starkness of Varda’s words contrasts greatly with the received wisdom that her films are serene, humanistic, and life-affirming. In an interview with Varda in Sight & Sound, Chris Darke used the word “lightness” to describe her style, but Varda disagreed: in her estimation, “lightness” tends to mean “don’t make things sad.” “Fluidity” is Varda’s own preferred term, the juxtaposition of images, words, and music to produce an emotional affect that flows tenderly and effortlessly, like water, or a gentle breeze. This is one of the reasons that her films so often feel warm and comforting—but while these qualities are certainly present in her work, she has also always strived to capture and reveal the sadness and sorrows of the human condition, the inherent horror of it, through the same subtle, ineffable approach.” Azadeh Jafari reminds us that the magic of Agnès Varda’s cinema isn’t some naïve, gentle optimism, but the way her humanity persists from scenes of gentle kindness to moments presenting the starkest terrors.

“Chytilová, her collaborator Ester Krumbachova (who co-wrote the film with the director and helped conceive its audiovisual design) and Chytilová’s cinematographer (and husband) Jaroslav Ku?era weaponize a battery of effects throughout the film: alternations between colour and black and white, images that move through a succession of colour filters, slow and accelerated motion, animation, found-footage inserts and jarring montage. None of these effects are large-scale or opulent; instead, they are driven by a low-budget, incessantly playful experimentalism. It is not hard to locate an echo of this spirit of creative play in the DIY ethos of Riot Grrrl, which was perfectly embodied in the zines that played such a central role in the movement: turning their backs on the mainstream media and its methods, Riot Grrrl zines were handmade, photocopied, emphatically anti-copyright, and distributed mostly by hand or at music shows.” Staying at TIFF’s Review, Girish Shambu connects Chytilová’s anarchic Daisies to the music and zine centered Riot Grrrl movement of the ‘80s.

“The film is built on Bogart’s face: its crumpled anger, its tombstone teeth, everything registered on his forehead when he lights a cigarette: defeat, bewilderment, sorrow at the predictability of everything. (‘Keep it in the shadows, Gloria,’ Bogart advised Grahame on set, ‘Let the camera come to you.’) Ray credited himself with ‘taking the gun out of Bogart’s hand’ – meaning he steered him away from the gangster roles he’d always played and brought him into the territory of complex characters. We know from Bogart’s face that Dix has murdered his own life, and we are beginning to understand that he is a serial killer. He starts brawls in bars, he breaks his lovers’ noses, he has fistfights with producers. Later in the film he smashes his agent’s glasses and almost kills a motorist in a random fit of rage. Whether or not he has strangled Mildred Atkinson, he’s capable of killing someone, and that, ultimately, is the knowledge on which the romance must rest.” Gaby Wood considers the changes between Dorothy Hughes’s and Nicholas Ray’s In a Lonely Place, and how the latter, rather than softening the novel’s portrait of a murderer, alters the story to a less conventional, much more dangerous vision of romance. Via David Hudson.

“More loose-limbed and rough-hewn than his work tends to be, Baal is the Schlöndorff film most closely aligned with the confrontational spirit of the cinematic new waves that were sweeping the world in the sixties. The handheld 16 mm camera work by Lohmann—a marked contrast from the posed tableaux of Love Is Colder Than Death, which he also shot—matches the lurching energy of Fassbinder’s performance…. Fittingly, given Baal’s repeated invocations of the indifferent natural world (“the sky above . . . was vast and still and pale”) and implicit questions about humanity’s natural state, the action alternates between the dingy interiors of taverns and garrets and the vast outdoors, where the antihero will eventually perish.” Dennis Lim views Baal as not only a success in its own right, but a fascinating unintended documentary portrait of the German New Wave, director Schlöndorff’s literary affinities faithfully capturing the unruly monstrosity of his star Fassbinder.

Kyle Buchanan takes a deep dive on one of his self-confessed obsessions, the significance of actors’ billings, parsing what he can from the ordering of the names of 27 actors on the Avengers: Infinity War poster.

The new Cinema Scope features interviews with a utopian filmmaker who hasn’t made a movie in decades and a pessimist who practically can’t stop working. Lizzie Borden talks with Christoph Huber about the compromises and conflicts she adapted to in her career, from idealistic collectives that turned upon themselves to Harvey Weinstein tossing out the screenplay that had attracted her to the studio thriller Love Crimes. (“By editing you start to throw out, the opposite of what I was doing in essays. You start to intuit, building your intuition through editing, and somehow your intuition then builds a structure. You know what works and what doesn’t work. I wasn’t concerned with screenplay structure back then: I only studied that after Working Girls, once I got in trouble with Love Crimes, when they threw away the script I had signed on to shoot. But in those freer days I really worked from the centre out: watch the footage already shot, which would tell you where to go.”) While Paul Schrader discusses the methodology, philosophy, and—a constant concern he attributes to his Calvinist upbringing—the financing of slow cinema with Alex Ross Perry. (“What happens when you’re bored? Well, you either engage or you exit. And the trick is to engage the bored viewer. How do you do that? Every slow filmmaker has a different little formula to do that. It’s a contract not unlike church attendance. No one walks out of church because they’re bored. They go to church knowing they will be bored: to experience that quietness. So you go to certain movies and know you’re going to be bored to some degree. And the filmmaker can use that to take you some place else. But if he abuses that, you will leave and you probably won’t ever come back to that church again.”) Via Mubi. 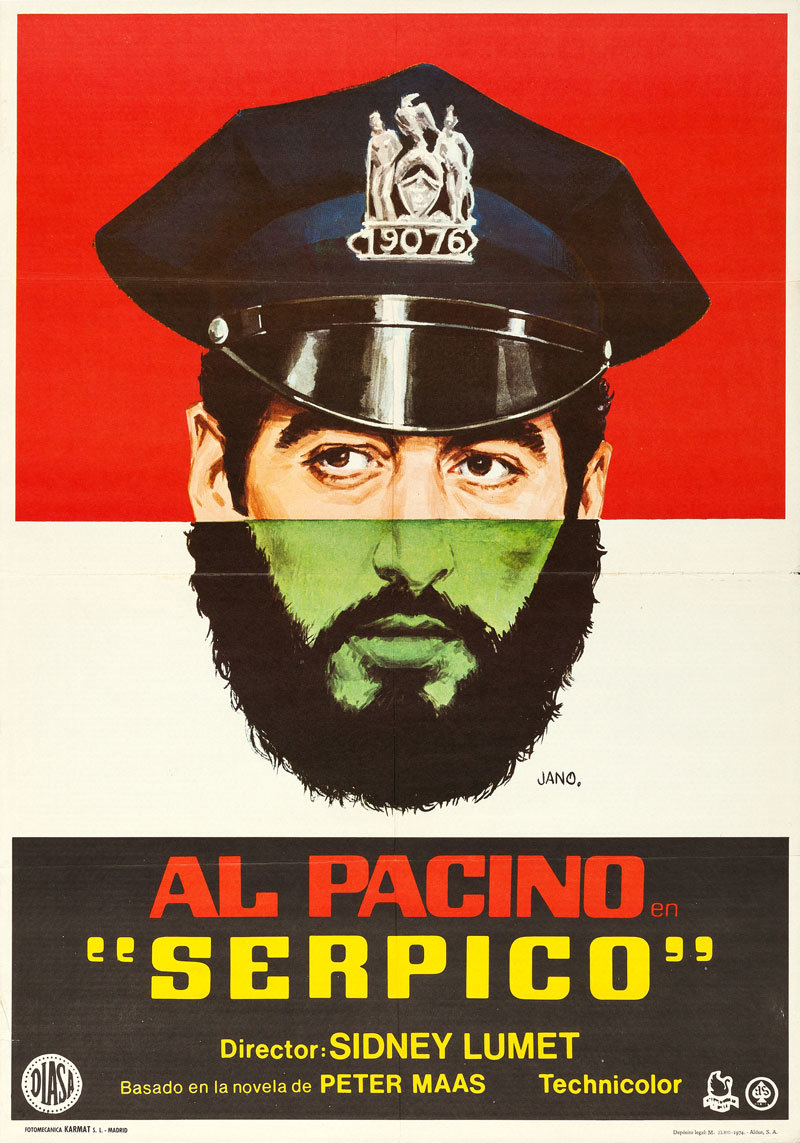 “Let me look at you. You look beautiful, just beautiful. You’re gorgeous.” To coincide with Quad Cinema’s retrospective of the actor, Adrian Curry offers a wealth of Al Pacino posters. Curry apologizes that the quality drops so heavily after the ‘70s; well, I think Carlito’s Way’s silhouette and The Insider’s negative space are as good as anything on display, and even the worst of them are enlivened by one of cinema’s greatest faces.

American actress Louise Latham passed away in February but I missed any mention until Laura Wagner cast a spotlight on it this week. She made her feature debut playing the mother in Alfred Hitchcock’s Marnie (1964), the role for which she is most famous, and went on to appear in such films as Firecreek (1968) with James Stewart and Henry Fonda, White Lightning (1973) with Burt Reynolds, Steven Spielberg’s The Sugarland Express (1974), 92 in the Shade with Peter Fonda, Mass Appeal (1984) with Jack Lemmon, and Love Field (1992) with Michelle Pfeiffer. She was busier on TV, appearing in dozens of shows, including the pilot episode of Family Affair and the top-rated series finale of The Fugitive, and made her final screen appearance in an episode in X-Files in 2000. She was 95. Mike Barnes for The Hollywood Reporter.