New at Criterion, a pair of films that inhabit their genres even as they transcend them. Michael Sragow illuminates the many flights of poetry and politics that Ichikawa infused in his studio-mandated remake of An Actor’s Revenge. (“What Yukinojo brings down on his foes really is an actor’s revenge, dizzyingly dramatic in its form, surgically perceptive in its manipulation of movers and shakers too vain to recognize their own weaknesses. And Ichikawa’s giddy, experimental movie is itself an auteur’s revenge on his studio, because he treats the timeworn material as an opportunity rather than a punishment. Until the tragic drama of its climax, the movie remains inventive, amusing, antisentimental, and playfully meta about almost everything and everyone, including the downtrodden and even the hero himself.”) And Amy Taubin gets again to plunk for one of her favorites, The Silence of the Lambs, placing it both within and inarguably apart from a long line of cinematic serial killers and their pursuers. (“In its deliberate, unabashed, and uncompromising feminism, The Silence of the Lambs is to the horror–psychological thriller combo what Angela Carter’s The Bloody Chamber is to classical fairy tales like “Little Red Riding Hood.” Both works take familiar stories—so familiar that they’ve become part of our cultural unconscious—and turn them upside down. [….] And for a female viewer—for all viewers who allow themselves to identify with a female hero—it is harrowing, exhilarating, and sad beyond measure.”)

“But it is in the emotional arc of the character where Day’s work really shines. From the first moment she is seen on screen, kicking the shins of a dance partner who gets “fresh” with her, we know who she is. When Snyder appears at her dressing room door, she does not cringe from his leer, but barks, “Gotta good look?” It’s clear—even though there’s no language to support it—that Ruth has been “messed with” by men probably from the moment she developed breasts. Watch her body language when men touch her. She’s been pawed her whole life. She sees Martin for who he is, but she’s tough, she thinks she can handle him. She wouldn’t be the first woman to make such a grave error.” Sheila O’Malley demands that attention must be paid to Love Me or Leave Me, Charles Vidor’s surprisingly harrowing mix of musical and gangster melodramas, and its superb lead performances by James Cagney and, most especially, Doris Day. 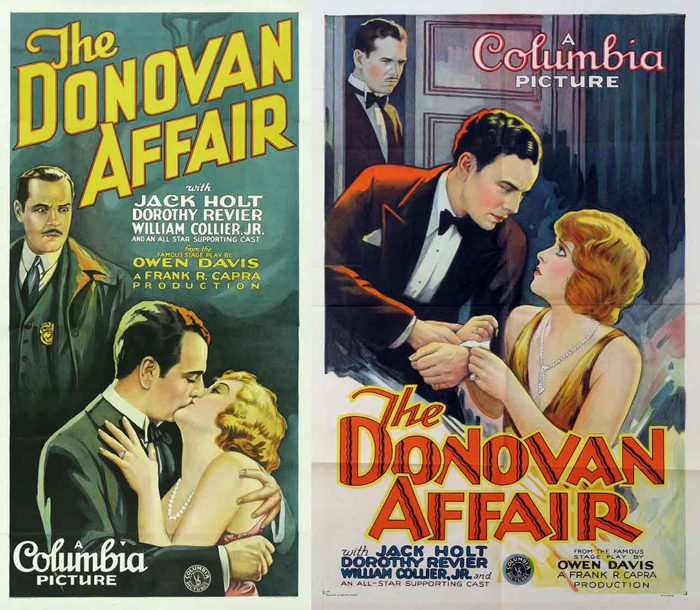 “In his autobiography Capra regarded The Donovan Affair as a turning point in his career. While complaining about the constraints on sound cameras, he regarded the film as “the beginning of a true understanding of the skills of my craft: how to make the mechanics—lighting, microphone, camera—serve and be subject to the actors.” To my way of thinking, what he did within the confines of early talkies was inject some of the pictorial fluidity and impact on display in the silent cinema. The Donovan Affair is a lot less pictorially stilted than most of the 1929 American films I’ve seen.” I’ve long thought that most adept of silent movie directors made their talking pictures debut much less choppy and stagebound than the works of their contemporaries; David Bordwell offers a fine example examining the ingenious multi-camera staging of Capra’s sound debut (though, ironically, one whose soundtrack has been lost) The Donovan Affair.

“Well a crowd gathered round and a scientist said it was marsh gas/Spiro came to make a speech about raising the Mars tax/The Vatican said, “Woe, the Lord has come”/Hollywood rushed out an epic film/And Ronnie the popular said it was a Communist plot.” Zach Schonfeld considers the factors—a three-year run of remarkable creativity that stamped the band forever in one time frame; less felicitously, an ill-advised and much regretted signing away of music rights—that have led Creedence Clearwater Revival becoming the go-to movie soundtrack for scenes set during the Vietnam War.

“This may sound corny, but I’ve always liked to make things that were beautiful…. I wanted to create beauty. That was my main desire. I’m just glad those films have been found beautiful by many, many people. Political consequences have never really come into my thinking. I didn’t think about it when we made Maurice or when I said first I would co-direct and then write the screenplay of Call Me. I was just making something I thought I would enjoy creating.” James Ivory talks—with Tim Teeman—about his family, growing up gay, his decades-long professional and personal relation with Ismail Merchant, even scripting the peach fucking scene in Call Me by Your Name—with the same reticent elegance that’s always characterized his films.

“I think also for me it is a very important thing as a filmmaker to occupy a space and subject matter that is not only continuously about what are considered to be?—?wrongly so?—?female issues. In others words, motherhood, romance, love?—?the so-called soft issues. We have to have the right to tackle every possible subject matter in every possible way. This [film] is about people struggling with their beliefs about politics, about medicine, about religion?—?the big human issues.” Sally Potter talks with Melissa Silverstein about her latest, The Party, and how feminism and optimism for change continue to affect her work even as she sees a younger generation stride out on the same battlefields she marched over decades before.

“Going to work—in between being in and out of those hospitals, that wasn’t always possible. So what I’m saying to you sounds, I hope, not like some sort of Hey, I had a boo-boo. I needed to put a Band-Aid on it, but more of an account of the reality of what I was walking around in…. I changed houses; I went through a divorce. Some kids were born. I mean, they were born, but they’re growing up. I was going through things that mold and shape you in ways that you’re not ready for until you go through them.” Brendan Fraser discusses his highs and lows—including the physical toll of stardom that contributed to withdrawal from movie screens—with Zach Baron.

“I said I’d have to think [the contract Warner Brothers offered after They Drive by Night] over. All I could think of was that seven years from that day I’d be a movie star, but they’d be saying the same thing to another girl; that in seven years she’d be another Ida Lupino. I decided there was something more for me in life other than being a big star. So I said no and walked out.” Kevin Crust offers a collection of Ida Lupino quotes, given over the years to LA Times interviewers, that remind you even when she was playing nice with the suits, Lupino was ever her own woman.

The weekly links page is compiled and curated by Bruce Reid.