A pair of fine memorials remind us what a unique presence we lost with the passing of Harry Dean Stanton. Drew Fortune rounds up a baker’s dozen of friends, collaborators, and fellow barflies to share memories of a flinty buddha who wouldn’t hesitate to cut you down to size even as he remained your boon companion. (“He’ll tell ya, ‘You’re nothing.’ Everybody would get mad, because they didn’t understand why he’d always be saying that. It’s his way of expressing that we’re all just individuals on the planet Earth—that you’re no bigger or better than anyone else. Him and Marlon Brando were tight, and he used to get Marlon all the time. He’d say to Marlon, ‘You know, we’re all nothing.’ Marlon would say, ‘What the hell do you mean?’”) And Brian McGuire, who directed Stanton in four films and acted as a special sort of assistant on the actor’s last, Lucky, recalls the headaches and concomitant great rewards that came from working with such a marvel. (“A million questions, all for just one short scene and one line! I made up answers on the fly, but Harry had yet more questions. ‘Where are we going after we leave the apartment?’ I said, ‘You’re going out to a nice restaurant for a celebration meal.’ Harry: ‘Where?’ I quickly spat back, ‘I don’t know, Harry, it’s been a long time since I had a nice meal. So you’re gonna have to pick the place.’ There was a long silence. Shit, did I just blow it? Did I go too far? Then I heard that classic old man voice say, ‘OK, I think I can do your picture.’”)

“There is beauty to burn here, and a hint of desolation in the train’s mournful horn as it pulls into Livingston, a town in the wide-open spaces of a state that has earned the nickname Big Sky Country. In and around that small town, we meet three strong-willed, uneasy women trying to shrug off or rise above or transform lives that feel too small for them. Each gets her own story in this portmanteau film, and though the women may brush against one another in passing, they will never meet. By the end, you might wish they had, if only to dissipate the loneliness that rises off them like morning fog. Reichardt weaves in comedy, in varying shades of wicked black, but she’s never one to shy from despair, even at the close of a film.” Ella Taylor plumbs the human depth behind the minimalist surface of Reichardt’s Certain Women.

“For film buffs, this ill-advised option was more than a momentary stumble. It seemed indicative of a company that understands algorithms but not auteurs—a company detached from the cultural and curatorial knowledge commensurate with its enormous distributive power. In other words, Gittell wrote, it signified that Netflix “lacks reverence for cinema history.” This was a minor misstep, but a major example of the increasing discomfort film buffs have with Netflix’s dominance.” Zach Schonfeld’s critique of Netflix’s dismissal of classic films has a bit of Chicken Little about it, as his argument stumbles every time he mentions the availability of other streaming services, but it’s a tidy summation of how little the company seems to care about the films that are supposedly its bread and butter.

“He had the great gift of friendship, witness everybody here tonight; I met everybody in that marvelous house of his that seemed to have been transported from a Tennessee Williams dream.  The fountains, the fish, the flowers, the books, the art deco pieces that he so treasured, Judy Garland’s slippers, the fat fabulous cats that would come and go, the mummified bats in their silver cases in his bedroom and the Poe etchings. The extraordinary array of guests. Where did they all come from? … I met everybody there that I wanted to meet: Marlene Dietrich, Gore Vidal, Russian alchemists, holistic healers from Normandy, witches from Wales, mimes from Paris, directors from everywhere, writers from everywhere and beautiful men from everywhere.” The Chiseler prints for the first time the brief but moving eulogy Barbara Steele wrote for her friend Curtis Harrington.

“Today my opinion on it changed a lot, but then from the Munich perspective I thought…well, I thought that this is Berlin, they don’t have any relationship to sensuality.” “It is not untrue.” “I remember visits at the old Arsenal Cinema.” “It was terrible.” “Terrible, yes. I always thought, come on, you can also have a nice dinner instead. Life is so rich, do we have to be so withered?” “But it is us who drink and smoke and you don’t…” In selecting an amusing aside I’ve somewhat misrepresented the tenor of the conversation that Christian Petzold (representing the Berlin faction) and Christoph Hochhäusler (Munich) have under Patrick Holzapfel’s guidance; both filmmakers are dense thinkers, and their comments—about editing, the use of plot, the strengths and pitfalls of noir—generally go on at much greater length and fascination.

“Anyone who is hopeful is simply not paying attention. There may have been a reason to be hopeful ten or 15 years ago, but we’ve played our hand now. We’ve indicated what our priorities are. Our priorities are our immediate comforts and not the existence of future generations. I don’t think intelligent life will end with humans. There may even be moral life after humans. But we have more or less soiled our nest. The universe will be well rid of us.” Paul Schrader (come on, there weren’t that many possible alternatives) lets his pessimism—about the environment, the ‘70s legacy, and the once “special relationship” between film and capitalism—fly in conversation with Brent Lang.

“The problem is that, in the studio, we played it in the mix really loud, so it would be more like you’d hear it in a theater. Then the heartache comes when you have to dial it back for television, because they have these restrictions as to how loud these things can be and how long they can be loud for; many different rules, it’s really not so great. It’s like when you know what it can be and then you have to suffer that [dilution], and people see it on their computer or even, my god, on their phone—it’s like a nightmare. There’s so much fucking power in that scene, and in this world people would love to hear what’s there, but the machines [which we watch things through] aren’t there any more. It’s got to be full range and full loud.” David Lynch talks with Daniel Dylan Wray about some of his music and sound choices for Twin Peaks: The Return, and explains David Bowie’s importance to him personally and how his “role” in the reboot came about (without, of course, confirming that he was deliberately turned into a tin machine).

“It was the second visit, which was a few months later, when I was standing in the kitchen and David walked up to me and said, Have you ever acted? I said no. Are you an actress at all, ma’am? I said not at all. Would you like to do a small part in the show? I said absolutely, that would be amazing. It’s really strange because when he did ask me, I told my husband when the crew left, and he said, Boy, that’s the only time I’ve seen you quiet! Because it really was quite the shock.” And in a related story, Devon Ivie talks with Mary Reber, the real-life owner of the Palmer manse, about her cameo in the series (inevitable spoilers here). 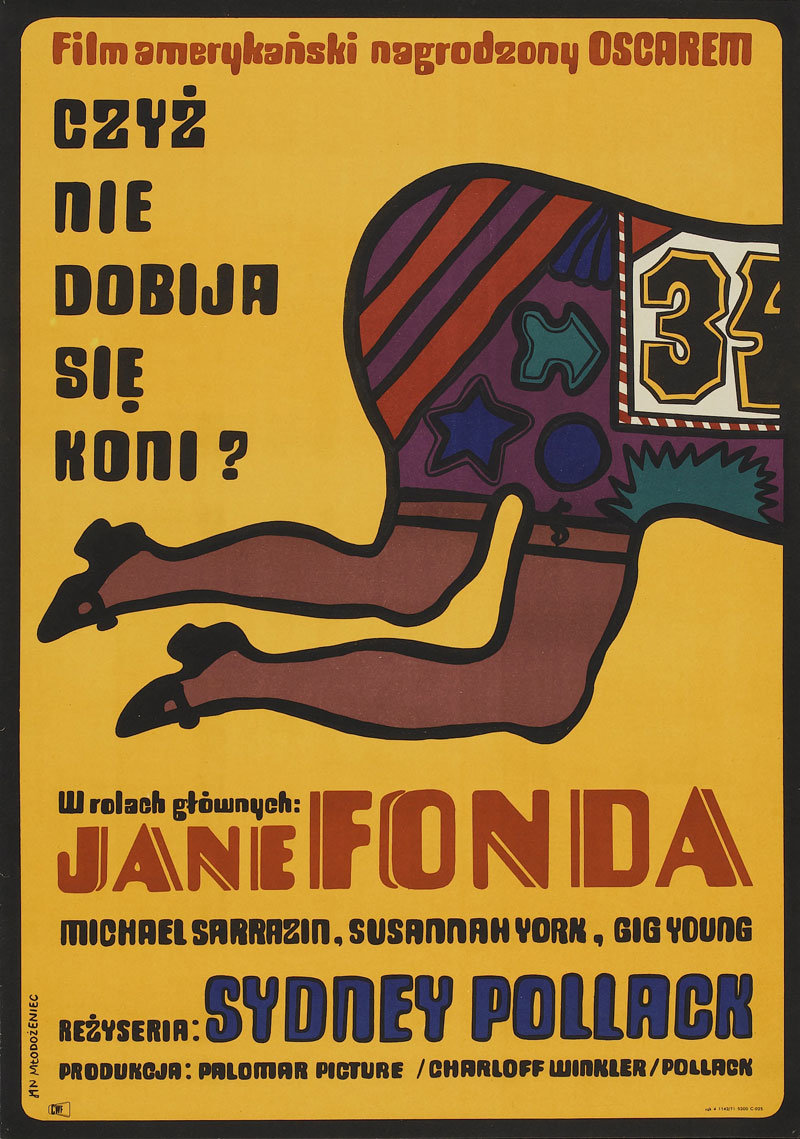 I’d never really thought about it one way or the other, but I wouldn’t have guessed Pollack’s They Shoot Horses, Don’t They? for inspiring great poster design. Adrian Curry has the international roundup to put the lie to my presumption.

Bernie Casey was still going strong when he left professional football after eight seasons with the San Francisco 49ers and the Los Angeles Rams and started acting. He made his feature debut in Guns of the Magnificent Seven (1969), co-starred in Martin Scorsese’s Boxcar Bertha (1972), and had major roles in the TV movies Brian’s Song (1971), as a football player of course, and Gargoyles (1972), as The Gargoyle, but it was the down and dirty “Blaxploitation” films that made him a leading man and a star, notably Hitman (1972) and Cleopatra Jones (1973). He co-starred in The Man Who Fell to Earth (1976) and Sharky’s Machine (1981), played Felix Leiter to Sean Connery’s James Bond in Never Day Never Again (1983), appeared in the comedies Revenge of the Nerds (1984), Spies Like Us (1985), Blaxploitation spoof I’m Gonna Get You Sucka (1988), and Bill and Ted’s Excellent Adventure (1989), and in the action films Another 48 Hours (1990) and Under Siege (1992). On TV he co-starred in Roots: The Next Generation (1979), The Martian Chronicles (1980), and Steven Bochco’s short-lived Bay City Blues, and appeared in memorable roles on Star Trek: Deep Space Nine and Babylon 5. In addition to acting, he was a published poet and a respected painter who has shown his work in galleries around the world. He passed away at the age 78. Mike Barnes for The Hollywood Reporter.

Journalist and longtime writer for New Yorker, where she contributed pieces to Talk of the Town for decades, Lillian Ross will forever be remembered for her 1952 book Picture, about the making of John Huston’s The Red Badge of Courage, which has been called one of the best books ever written about Hollywood. She died at the age of 99. Rebecca Meade for The New Yorker.

Middleweight boxing champion Jake LaMotta made appearances in a few films and TV shows over the years, most memorably as a bartender in The Hustler (1961) with Paul Newman, but his most distinctive cinematic legacy is as inspiration: Robert De Niro won an Oscar playing the boxing legend in Martin Scorsese’s Raging Bull (1980), based on LaMotta’s autobiography. He passed away at the age of 95. Kevin Mitchell for The Guardian.