“Last year, a series of Fulci’s films and several exhibitions of postwar Italian painting coincided on New York’s cultural calendar. Shows of Schifano’s work and that of several other figures in the Italian avant-garde of that period, such as Alighiero Boetti, Giulio Paolini, Alberto Burri, and Fabio Mauri, colonized uptown art galleries. Downtown at Anthology Film Archives, the Italian film programming collective Malastrana presented “Lucio Fulci: Genre Terrorist,” an October showcase of 15 films by the Italian director. Though it’s safe to say there was little overlap in the crowds viewing the post-war paintings and those reveling in grindhouse gore, the two seemingly distant bodies of work bear a number of distinct points of comparison and reference.” Chris Shields points out the numerous debts and points of contact between postwar Italian art and the postwar Italian horror film, particularly the bleak, “texturally obsessed” landscapes of Fulci.

“Apart from the idyllic partisan forest, there also exists the tragic universe beyond the forest’s bounds. These two universes, closed on themselves with heightened genre definitiveness and finality, oppose one another and define each other through this opposition. In the forest reigns early autumn, with its sun shining through the luxuriantly yellow foliage. But around the forest is a pre-winter season, with its bare wastelands, where under heavy skies and wind skeletal trees are stripped of their leaves and burned down huts stand still. During some of the shots the viewer is startled: we’re seeing the landscapes from IVAN’S CHILDHOOD.” A newly translated excerpt from Evgenii Margolit’s 2012 book The Living and the Dead places Boris Barnet’s A Good Lad as the wellspring of Soviet war films—despite its unorthodoxy and official banning. Via Mubi.

“These references are not just texture; they’re at the heart of Zodiac’s project, which is to chart the slippage between reality and pop culture that turned a murderer into a multimedia star. James Vanderbilt’s screenplay gives some of the credit to the Zodiac himself (or maybe themselves, since the theory of copycat killers is very much in play in the film’s presentation), positioning his publicity-mongering tactics as ahead of the curve. And while the film is set in an analog era, Fincher teases out the post-internet implications of an anonymous person firing off cryptic messages to be decoded by anybody with the patience to play along.” Mubi also spots Adam Nayman’s celebration of Zodiac as Fincher’s first masterpiece, a stirring exercise in using the director’s noted perfectionism and technical precision to limn ambiguity and the unknowable.

“Depleted of all but $800 of their “nest egg,” the yolk of which has splattered all over a roulette table in Las Vegas, the Howards steer their Winnebago off the highway and into the unknown—perhaps the first truly spontaneous act of the whole misadventure, because they’ve run out of better choices. They may not be “touching Indians,” as David initially envisions, but they’re finally roaming the country without a map or a compass, living wholly in the present, with the future as shrouded in darkness as the exit ramp. ‘My legs are asleep,’ says David. ‘Let’s live here.’” Scott Tobias charts the anxieties and fractures that fuel Albert Brooks’s Lost in America, perhaps the only ‘80s movie that actually can’t be understood without so many critical references to the Reagan era.

“The title sequence of Rosemary’s Baby pits the two strongest desires within the film (both which end in the birth of a child) against each other by giving them equal filmic importance, weight, and screen time. With the opening moments of the film, the role of femininity, motherhood, and manipulation are all set against each other with their different motives, playing with each other through unsettling music, camera movements, and a final shot of a young, happy couple who have no idea what is about to befall them.” Alexandra West breaks down the originality of Rosemary’s Baby’s opening credits, and shows the long reach of its unsettling intimations of menace.

“The concept, Douglas says, is basically an updated Scream or Heathers in which a group of young kids are investigating a murder that occurred years ago. That was the treatment he was working off, anyway. ‘But with your notes and your input,’ he says to Jake, ‘we could contemporize it.’ Douglas says he wants to “deficit-finance” the film himself, whatever that means. He wants to bet on Jake. ‘You just proved this week that your fans will transact,’ Douglas says. ‘I think there could be tremendous upside.’” Zach Baron follows several young actors to learn the new paradigms of the Hollywood Hustle, where the explosion of platforms means you have more opportunities to be on a show but less chance to make an impact, where audiences will binge feed your work in a few days then demand what next, and piping up about your Instagram followers is a necessary part of the audition process. Via Longform. 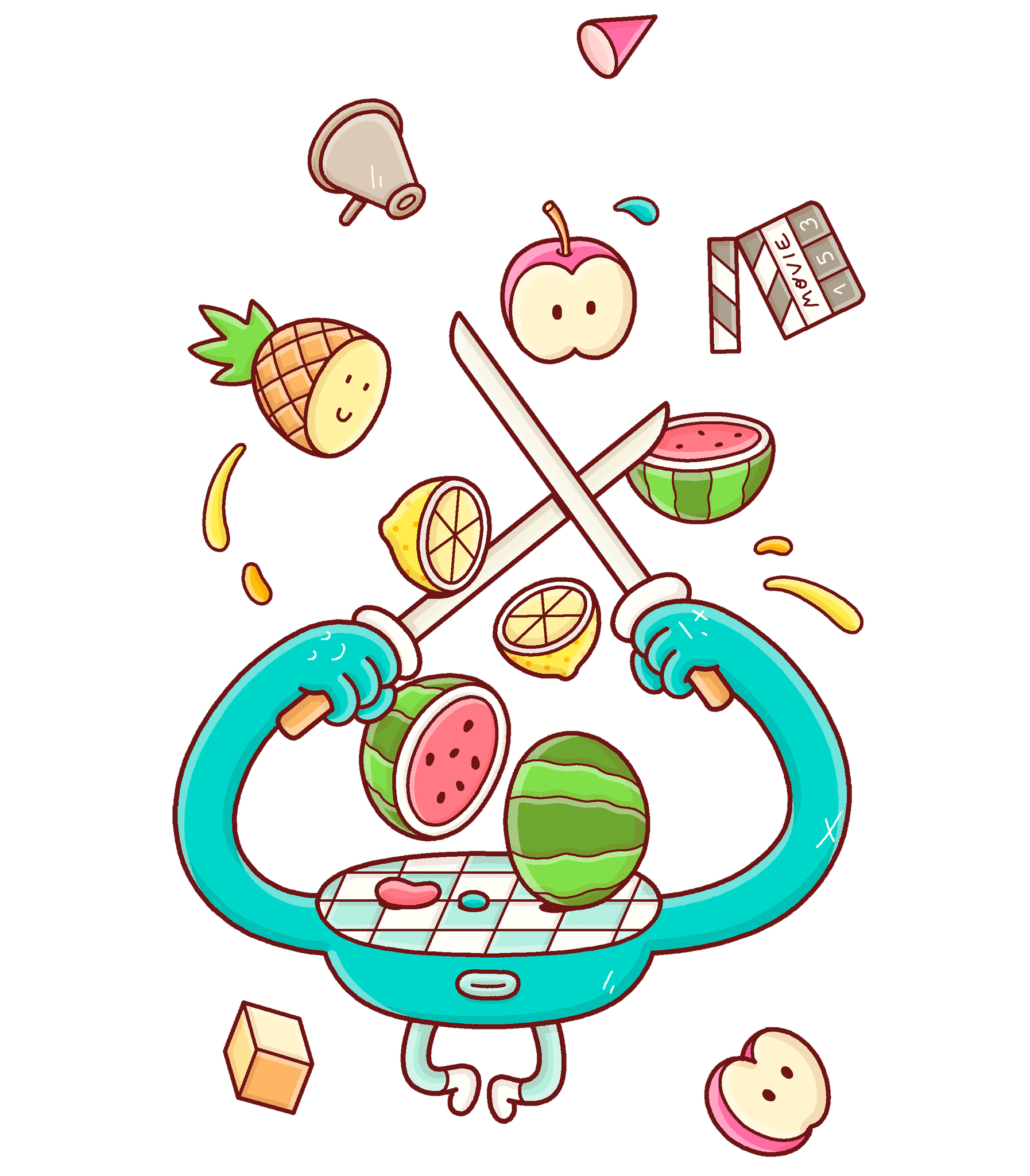 “Vinson worked out a ‘‘shopping agreement’’ with Half­brick, a contract that gave him exclusive film rights to Fruit Ninja for a limited period so that he could recruit writers and then take a proposal to the studios…. Vinson then realized that he was faced with a formidable predicament. There are no protagonists or antagonists in Fruit Ninja. There’s no mythology. No moral. The game play involves staring at a wall as pineapples, watermelons, kiwis, apples and oranges fly up into view. The only thing you do is swipe at the fruit with your finger, cutting them in half. Sometimes there are bombs, and you’re not supposed to swipe at those. ‘There’s a fun game to play, but that’s it,’ Vinson says. ‘The challenge was: What the [expletive] am I going to do with Fruit Ninja?’” While Alex French offers us a behind-the-scenes look at another current trend, the forging of movies from plotless intellectual properties like mobile games and emojis. “The egotistic joy of being able to look at images that belonged to the inaccessible realm of cinema just for myself quickly produced a dialectical by-product. While I could not even imagine having anything in common with the art of filming (whose basic principles were naturally far beyond my comprehension), I grasped something of the film itself, a piece of celluloid not so different from the negatives that came back from the lab. Something I could feel and touch, something of the real world. And why then, (dialectically insinuated my own Jiminy Cricket), could I in turn do something similar?” A brief reminiscence from Chris Marker on a type of magic lantern that fascinated the young schoolboy manages to resonate with his entire career—not least the story’s punch line. Via David Hudson.

“I looked over to where Frankie was pointing and saw John hauling himself up into the door of his gleaming trailer in his full-fur Mog suit, minus the headpiece. I didn’t know if I’d be up to the bantering he traded on the set with the other lead actors. My first inclination was to say no but suddenly heard myself say with false cheer, ‘Sure.’ As I got closer, I heard John shout out, ‘Get in here Pullman, I’m starving for my Pritikin Diet Soup.’” Bill Pullman recounts how generously John Candy took his Spaceballs costar—feeling over his head and painfully aware he was nobody’s idea of the funniest guy on set—under his wing .

“I met Carl Reiner, who—as you know—directed [The Man with Two Brains], and he offered me the part. And I remember phoning him up and saying, ‘Oh, Carl… Mr. Reiner, thank you so much for casting me in this part.’ And he said, ‘Oh, that’s all right. You were the cheapest!’” David Warner is, as he admits in numerous asides, perhaps a smidge too respectful of his collaborators to make for one of Will Harris’s great Random Roles interviews, but he gives a lovely account of bonding with Sam Peckinpah from the first moment to the last, intriguingly brings up Providence as a film that slips through Harris’s typically encyclopedic list of questions, and offers a funny, charming portrait of a young Bob Dylan on the set of the now-lost BBC production that marked the debut of “Blowin’ in the Wind.”

American actor John Heard should have broken through with his searing performance in Cutter’s Way (1981), a film that never found an audience on its initial release but has since been rightly championed as one of the great American films of its era. Most obituaries, however, have led off with his role in the Home Alone movies, which certainly have been seen more people, and his appearance in the first season of The Sopranos, for which he received an Emmy nomination. He began acting on stage in Connecticut and New York, went to Hollywood for his feature debut in First Love, and then made Joan Micklin Silver’s indie ensemble drama Between the Lines (1977) back in New York. He went on to star in the TV miniseries The Scarlett Letter (1979) and in On the Yard (1978) and Chilly Scenes of Winter (1979) and played Jack Kerouac in Heart Beat (1980) opposite Nick Nolte and Sissy Spacek. After Cutter’s Way he starred in the remake of Cat People (1982) and cult horror film C.H.U.D. (1984), was part of the ensemble of Martin Scorsese’s After Hours (1985), and was the corporate nemesis of Big (1988). He remained a solid, reliable actor working constantly in movies and on TV, mostly in supporting roles, for the next three decades, appearing in such films as Betrayed (1988), Awakenings (1990), Rambling Rose (1991), In the Line of Fire (1993), Snake Eyes (1988), and Pollock (2000), and on TV shows like Law and Order, CSI: Miami, Battlestar Galactica, Person of Interest, Prison Break, and NCIS: Los Angeles. And yes, he did appear in the campy Sharknado, which he talked about (along with other roles) at the A.V. Club in 2015. He passed away at the age of 71. More from Ryan Gilbey for The Guardian.

June Foray was the “first lady of voice actors.” She was the voice of Rocket J. Squirrel and Natasha Fatale on Rocky and Bullwinkle, Granny and Witch Hazel in the Looney Tunes cartoons, Nell in Dudley Do-Right, the Talky Tina doll in the famous Twilight Zone episode, Cindy Lou Who (who was no more than two) in the original How the Grinch Stole Christmas! (1966), and countless uncredited voices in animated theatrical shorts, TV shows, and movies in a career that began on radio and spanned over 60 years. She was 99 year old. Cheryl Cheng and Duane Byrge for The Hollywood Reporter.