“Good Morning is inarguably the least loved and least representative in the Ozu oeuvre. But as is often true of early comedy in more or less anybody’s oeuvre—whether or not they’re known as comic artists—Good Morning is one of the seeds from which Ozu’s later works grow, a sort of first principle. It is perhaps a more intricately structured investigation of what we can say through the walls of time and age and experience erected even between parents and children, siblings, lovers. It is a chamber piece for all the human linguistic instruments: fart and sigh, small talk and drunken ramble, all the possible declarations of weakness, suspicion, compromise, and love of which you could conceive.” I’d say Annie Julia Wyman’s initial statement up there is much more than arguable, but past that her praise of Ozu’s celebration of the wordless means by which we convey love—including, yes, farts—is spot on.

“It might seem rather a cliché to insist that film is a visual medium, but surely what is not spoken is just as important, in the total effect of this movie, as the articulation of its earnest ethical strivings. Tarkovsky seems to have found a way of photographing the human head—animated and in repose—as it had never been photographed before. He makes it monumental: sculptural and philosophical. Granted the chaotic interruptions to the pro­duction process (of which more shortly), the concentration of effort he achieved here strikes me as nothing short of miraculous. Naturally, these human heads had to be extraordinary in the first place: not just that of the Stalker (Alexander Kaidanovsky) but the Writer’s and the Professor’s as well. How hypnotically the camera inves­tigates them!” Mark Le Fanu traces the oppressive state of mind under which Tarkovsky conceived Stalker as a hidden religious allegory, and briefly recounts the horrifying ordeal of the shoot, in which the third time (filming the picture) might have been the charm but also the reason so many of the crew, director included, succumbed to cancer.

“Colour films from the distant past (in motion picture terms) tend to have a surprise quality of making that past strikingly present, as the captured reality hits us. Kinemacolor, because the colour reproduction is imperfect, done not have quite the same effect. The past remains past, out of reach, still wrapped in the mystery of the passing of time.” Luke McKernan’s great discovery at Il Cinema Ritrovato was an early color process that, because it requires a spinning color disc not only to film but in the projector, has been all but lost to history. Via David Hudson.

“Ever since I came in contact with the film experts I have thought someone was crazy and it might as well be me. Over and over again, some shit would start raving about Woman of P[aris]. ‘Have you seen it?’’ said I. ‘No.’ ‘Well, I have and it stinks.’ The historians hear me not—silly old actress, what does she know?” Alicia Fletcher recounts the career of Louise Brooks—not just the remarkable one as an actor, cut cruelly short by studios tired of dealing with her prickly intelligence, but her late-in-life enshrinement as a historian and critic (which involved some head butting of its own). Fletcher includes some delightful letters Brooks sent to CBC’s Gerald Pratley.

“Trying to process all I saw and did, the task is made a bit difficult due to nitric acid burns sustained on my hands (the double gloves used were not strong enough protection). The most difficult part of this enormous task–heartbreaking, really–was periodically opening a can and in some rare cases finding that no recognizable film, as such, was left inside, and discovering instead only foul-smelling, rust-colored or brownish dust or powder (stage 5 deterioration). Or, in the alternative, another horror: seeing a shocking mass of what looked like nothing but gooey, liquid white cotton, or maybe a fused mass of what resembled frosted but rancid vanilla ice cream (stage 4 deterioration). See the photos. In neither case could anyone have guessed that these completely transposed elements had once been 35mm film treasures containing unique, shimmering, lustrous images, now decayed, and entirely, irretrievably gone.” Archivist Richard W. Bann sends out a message—equal parts exciting and despairing—on the treasures stored in the Hopalong Cassidy vault, and how many of them are now degraded and lost forever.

“You’ve never done this before.” “Neither have you.” “You’re right. You go.” Rob Galluzo lays out the evidence from his Shock Waves podcast offered by director John Leonetti—whose brother Matt was the DP on Poltergeist—that the rumors of Spielberg’s ghost direction are entirely accurate. Like the Bann article above, via Movie City News.

“My dad had Wild Man Fischer’s Wildmania, which looked like a novelty record, but then when you put it on, it was so much more. I couldn’t believe how it even existed, that people would pay money to record something like this. It was just a lot of Wild Man Fischer screaming over instrumental tracks—some of them didn’t even have instruments. They were almost like perverse nursery rhymes, but he sounded so happy to be yelling. He was just the ultimate outsider banging against the walls. I loved trying to imagine the type of person that would even buy that record.” Harmony Korine details the soundtrack of his life, five years at a time, for Pitchfork’s Marc Hogan—almost all of it, of course, designed to send parents into hyperventilation. Via Mubi.

“But I haven’t been directed by anyone in 30 years. I come in with stuff, I figure if they don’t like it, they’ll tell me and I’ll do what they ask me to do. They don’t ask me to do anything, so I do it, hit the mark, say the words, and get the fuck outta there. And that’s it. Acting is so fun.” Steven Mears posts some unpublished excerpts from an interview earlier this year with Martin Landau, on the joy of surprise, how Harvey Weinstein shut down his one interest in directing, and the stage role that got him spotted by Hitchcock. 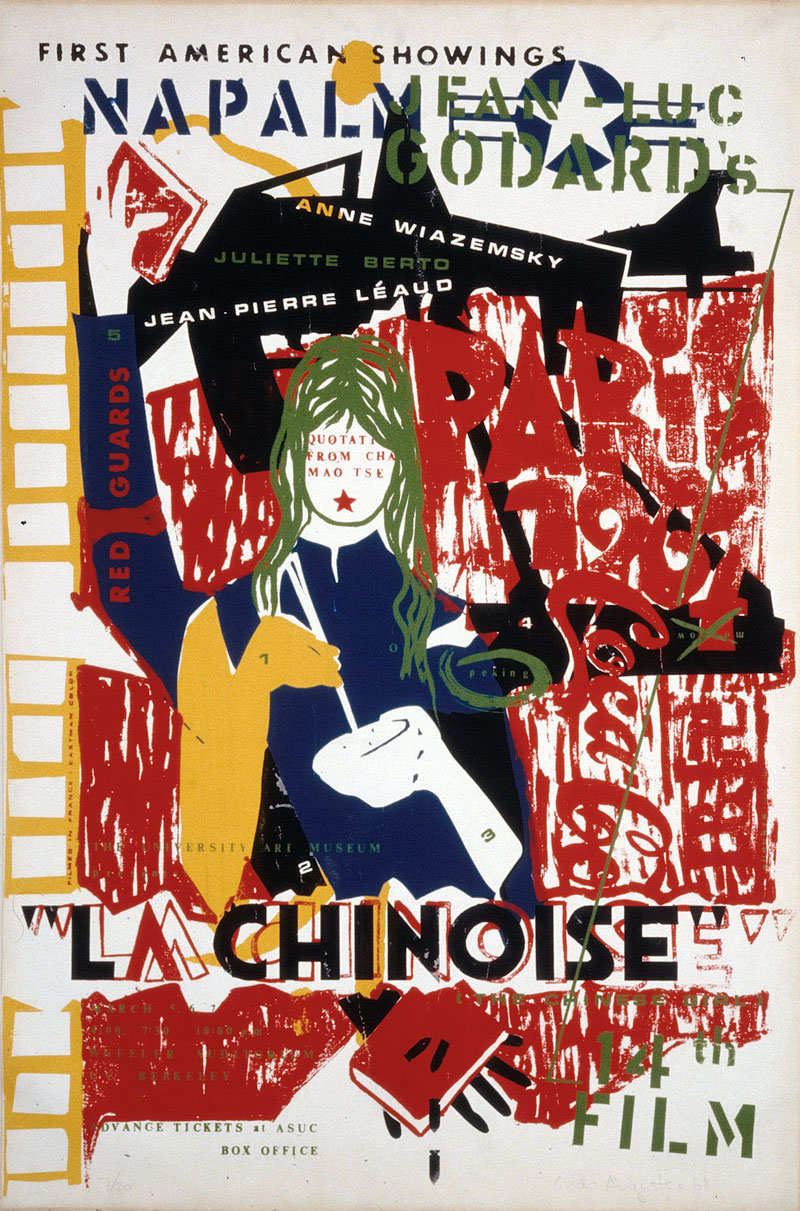 Adrian Curry’s collection of posters for Godard’s La chinoise shows several different designers trying (and mostly succeeding) to live up to the film’s confluence of revolutionary and immediately compelling imagery.

David Cairns has been featuring some terrific set photos on his site, mainly from Siodmak B-pics, which even prompt a little historical mystery about Universal’s titling of horror films in production.

George Romero changed horror cinema forever with his debut feature Night of the Living Dead (1967), a film that was almost universally dismissed upon release and didn’t find its audience until a couple of years after its initial release. Due to copyright complications, the film went into the public domain and Romero and his collaborators saw very little money from the film’s eventual success. It did launch Romero as a film director, though like many of his fellow filmmakers who broke through with horror films, he never broke out of genre films and small budgets. He made The Crazies (1973), a different kind of horror, and Martin (1978), a twist on the vampire drama, but had to return to the genre with Dawn of the Dead (1978) for his next hit. Knightriders (1981) was a more personal film, Creepshow (1982) his tribute to EC horror comics, and Monkey Shines (1988) an underrated thriller, but his final films once again involved the living dead: Land of the Dead (2005), which gave Romero his biggest budget, and the smaller, more independent Diary of the Dead (2007) and Survival of the Dead (2009). He passed away at the age of 77. Ryan Gilbey for The Guardian.

Martin Landau first attracted attention in Hollywood playing the sinister killer Leonard in Alfred Hitchcock’s North By Northwest (1959) and won an Academy Award for playing Bela Lugosi in Tim Burton’s Ed Wood (1994) after being nominated twice before, for Franci Ford Coppola’s Tucker (1988) and Woody Allen’s Crimes and Misdemeanors (1989). A student and later teacher in the Actors Studio, Landau started working in TV in the 1950s and was soon in demand in supporting roles in such films as Cleopatra (1963) and The Greatest Story Ever Told (1965) and in memorable episodes of The Twilight Zone and The Outer Limits among many shows. He was cast in Mission: Impossible opposite his wife Barbara Bain, but they left after three seasons, and they co-starred again in the syndicated science fiction series Space: 1999. Tucker gave him a late-career comeback and he continued working, and serving as head of the Hollywood Branch of the Actors studio, up to his death at the age of 89. Mike Barnes for The Hollywood Reporter.