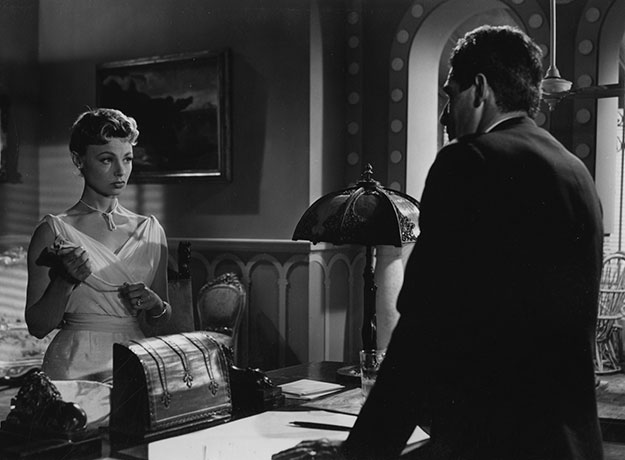 “The sheer pleasure in filming that can be found in just about all of Gréville’s works touched me at the time and still moves me today: fleetingly present in commissions (Le port du désir, 1954, deceptively present, and containing a beautiful underwater sequence, in Dorothée cherche l’amour, 1945, which also has a very well-directed gunfight); and sustained throughout his best works (Secret Lives, Noose, Pour une nuit d’amour, Le Diable souffle, Remous, Brief Ecstasy, parts of L’Envers du paradis, 1953, and L’Accident). This joy in filming bears no relationship to the visual brio of a Duvivier, the dazzling rigor of a Jean Grémillon or a Max Ophüls. It privileges surprise, the pileup of ideas, the flow of images that recalls wordplay, without ever being in danger of excess or ridicule. Gréville doesn’t recoil from special effects, doesn’t hesitate to divide the screen in two like a checkerboard in which the heads of his characters are inlaid, or set doves into flight above the Panthéon (in Menaces), and this audacity often pays off, even if it may make proponents of the sober and the natural smile.” Edmond Gréville enjoyed a long career in both France and England, but his films have mostly fallen to obscurity; a status, Bertrand Tavernier’s impassioned advocacy insists, in need of correction.

“So determining how much of the plot originated with Stannard and how much with Hitchcock would be difficult. (Hitch took no cowriting credit, but then he often didn’t, though he was almost always closely involved with the scripting of his films.) It could be that the director picked up ideas here that he would go on to repeat and develop in his later work or, equally possibly, that the plot of The Lodger allowed him scope to explore preoccupations that he had already been mulling over.” Philip Kemp emphasizes The Lodger’s role as the first Hitchcock film worthy of the title Hitchcockian—though he overreaches in claiming this begins Hitch’s fascination with blondes, a trope the director literally kicked off his career with in the opening scene of his debut The Pleasure Garden.

“The film executes a brutal spatio-temporal compression, maximising Lucia’s sense of oppression and suffocation—but this results not only from a process of synthetic adaptation, but also the way in which Ophüls multiplies, both in number and intensity, a whole series of elements and effects. Like in a war film, the attack comes, relentlessly, from all sides. Like in a horror movie, menace is made manifest through repeated assault on the most intimate spaces.” Cristina Álvarez López’s elegant close reading of Joan Bennett and James Mason’s first meeting in The Reckless Moment shows how precisely Ophüls undercuts any sense of domestic tranquility even without considering the nasty business of this strange visitor.

“That this most French of directors was an avid Americanophile is just one of the many ironies that mark his career (Ginette Vincendeau subtitles her study of Melville An American in Paris). When asked which directors influenced him, he rattled off the names of 64 American auteurs from the pre-war period, and elsewhere called John Huston’s The Asphalt Jungle “the greatest film in the world”; he sported a Stetson and Ray-Bans, drank Jack Daniel’s, loved guns, boat-sized Cadillacs, and Ford Mustangs, purported to know Manhattan better than any New Yorker, and changed his name from Grumbach to Melville in homage to his favourite Yankee author. However, Melville balked at anyone who claimed that his films were in any way American, arguing that they were utterly French, especially in their aura of existential pessimism.” Even in a brief introductory note to the films of Melville, James Quandt offers some meat to chew on, muddying the clean break some have made between his earlier, “Bressonian” features and his later “Hawksian” ones, and rattling off a chain of influences and collaborations that place one of French—and world—cinema’s unique voices into context. Via David Hudson.

“Eroticism itself was hardly an alien concept to the Japanese, but before now, never had it been allowed to flourish in the cinema to such an extent. Indeed, vigilant Japanese censors of the prewar era took to snipping every instance of a kiss, every insinuation of physical intimacy, in imported titles, while the tipping point of Pearl Harbor saw Hollywood’s seditious brand of escapist fantasy completely banished from the nation’s screens along with, indeed, every other title produced in America.” Jasper Sharp recounts the brief flourishing of the ama (female pearl diver) film in Japan, a trend that never traveled much beyond the country’s borders despite being launched and eventually reclaimed by exoticizing westerners (starting with von Sternberg and ending with the follow-up to Mondo Cane). NSFW, in appropriately pin-up fashion.

“The characters were complicated, vulnerable and flawed, careening through the sorts of hairpin emotional turns that could win awards for the players who snagged the roles. The plot hurtled along from one brazen surprise to the next, yet it was simple, too: Two outlaws lam it in a hot convertible after shooting a would-be rapist. The story fit safely within the cinema template of broken taboos, anti-heroes and screw-the-system attitudes that Hollywood had championed since the breakup of the old-time studios. But there was a catch, as they say in the movies, and it was a sticky one.” An excerpt from Becky Aikman’s book Off the Cliff: How the Making of Thelma & Louise Drove Hollywood to the Edge details agent Diane Cairns tense Monday awaiting calls from the studios after they’d read Callie Khouri’s script.

“I think she was skeptical that I was making a movie, and maybe I wasn’t even making a movie! I don’t know what I was doing. I was there recording those large Polaroids being taken off the wall, which is a remarkable scene. And that suggested that we should continue. And then I spent a day or so with her in the garage, with her showing me Polaroid photographs…. So it happened really quickly and we started editing immediately, and it started growing in length—every time we shot, we would add more, and then more, and then it was close to 80 minutes in length and we thought, This is a film. We’ll stop now.” Jason Bailey interviews Errol Morris about his willingness to experiment with the documentary form, from how his personal connection with photographer Elsa Dorfman altered the style of his latest film The B-Side to some intriguing hints of what to expect from his upcoming Netflix series.

“I don’t understand this certain type of acerbic ’90s non-mainstream movie which was very cynical… Everyone was very cynical, everyone was filled with hatred. I’ve never been able to relate to that. I could never make a movie like that. I wouldn’t say that our films are insanely hopeful, but I do see them that way, weirdly. The moments of glory are there.” Josh and Benny Safdie talk with Dan Sullivan about how their acclaimed Good Time works as genre, political statement, and their latest examination of love.

Swedish actor Michael Nyqvist played journalist Mikael Blomkvist in the original Swedish adaptation of the Millennium Trilogy (aka Dragon Tattoo Trilogy) and villains opposite Tom Cruise in Mission: Impossible – Ghost Protocol (2011) and Keanu Reeves in John Wick (2014) but his career began years before. He had small roles in movies and TV roles through the nineties before landing the part of John Banck in the first season of the Swedish mystery series Beck. He co-starred in Lucas Moodyson’s Together (2000), won the Guldbagge (the Swedish equivalent of the Oscar) for actor for The Guy in the Grave Next Door (2002), and starred in the Oscar nominated As It Is In Heaven (2004). Since Dragon Tattoo, he’s been moving back and forth between American and European production, and recently completed shooting the new Terrence Malick film Radegund and calble mini-series Madiba, both currently in post-production. He passed away at the age of 56 after a battle with lung cancer. More from Michael Carlson for The Guardian.