“Mark Twain said, “The difference between the almost right word and the right word is really a large matter—’tis the difference between the lightning-bug and the lightning.” The same goes for visual compositions. In this Front Page, the right shots take the place of the almost right shots—and the result is galvanizing. When the lens takes in a two-shot of opposing journalists instead of a wide shot of the entire company, or when a star reporter who’s “going New York” spits out his new address to his colleagues, then writes it on the wall in one unbroken move—instead of delivering his speech in a flat profile—it’s not just great “filmed theater,” it’s also a real live movie.” Criterion’s latest double-feature redeems the entire notion of remakes, while restoring luster to the never-really-seen original. Michael Sragow reports on how Milestone’s The Front Page is finally seen anew thanks to the recent discovery of the director’s preferred American release cut; while Farran Smith Nehme reminds us that His Girl Friday has never needed such building-up, regardless of how Hawks came by the idea of the gender flip. (“Remarriage plots are the most grown-up variation [in the screwball comedy toolkit], because these are the movies that say two people can be perfectly suited and still louse it up. Matching (or, if you will, marrying) this device to The Front Page, so famous for its bite and cynicism, resulted in the most bracingly adult screwball comedy (and romance) of them all. Hawks and Lederer found a fresh spin on the remarriage comedy, making the question not how the wandering spouse will find her way home but how she’ll get back to work.”)

“I suggested earlier that one has to cut through layers of superimposed cultural meaning to get down to what The Witch is. And this interlude in which I’ve described Eggers’ fastidious focus on craft might make it sound like I’m about to assert that The Witch is a tightly controlled aesthetic exercise rather than an ideological statement—a painting rather than a thesis paper. But I don’t think Eggers is a “formalist,” if we’re defining formalism as privileging the aesthetic over the thematic. He uses craft as a conduit for empathy. It’s telling that Eggers praises Bergman’s technique in the same breath as he praises Bergman’s compassion—and Sven Nyqvist’s. To call a cinematographer “compassionate” is to assert that the camera’s gaze can be loving, dignifying; it is to assert that the act of photographing people, and portraying them honestly and generously, carries moral weight.” For Lauren Wilford, once the inevitably over-simplified political and feminist readings of The Witch have faded away, the movie can be taken for what it is: a debut promising a great, idiosyncratic career.

“These little comedies starring multiple-divorced men still burlesquing as tough guys when some of them actually are tough guys, or at least, little shits, now with arrest records, are marked with a peculiar darkness, as if Diane Arbus somehow took over direction. Gorcey once shot a gun in a toilet, got the boys to glue it back together, which then caused Martha Raye to fall in and injure her nether-regions. That’s a true story, according to Gorcey. Why not just put that in one of the movies?” Kim Morgan writes up the Bowery Boys—particularly the shrewdly mercenary Leo Gorcey and the ill-starred Bobby Jordan—in her program notes for Kid Dynamite. Via Movie City News.

“There was your faithful narrator being held helpless, like a babe in arms, and suddenly realizing where he was and why Home on the gate had looked so familiar.” Modernism in Metro-Land takes a tour of the then-contemporary brutalist architecture Kubrick used to capture the dystopia of A Clockwork Orange. Via Roland-François Lack. 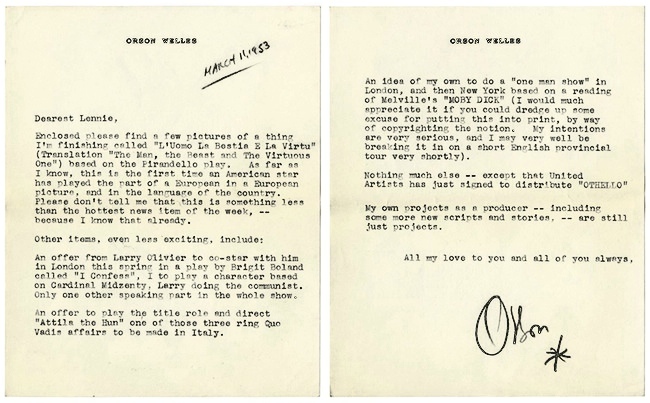 “Please don’t tell me that this is something less than the hottest news item of the week—because I know that already. Other items, even less exciting, include….” Flipping through Welles’s copy of Badge of Evil (inspiration for Touch of Evil), librarians at Indiana University found a heretofore unknown letter from the filmmaker describing some of his upcoming projects circa the early 1950s—one of which actually kind of came to pass.

“Another Markerian preference: for solo works over group recordings, as if the filmmaker digs the pure artistic statement only when the artist in question is captured in quiet solitude.” Ehsan Khoshbakht parses what he can of the compiler running through the tracks on a Bill Evans mixtape put together by Chris Marker.

“They loved to shock us with these stories, but what was most interesting was the expression of transport on the men’s faces as they’d tell them. Their tales of the wonderful prostitutes they’d frequented all over the world were lessons to us on how to be better whores. These men couldn’t understand why we girls didn’t wise up and learn how to make good money, like our sisters who knew how to put out. We were being bad businesswomen who did not understand the cash we could be making for ourselves and for the bar-owners/pimps. I feel they were truly trying to help us. But it was clear that these were lessons for only a certain class of women (the uneducated, the poor, society’s rejects). They felt certain that if we were not whores now, we would be whores soon.” Love Witch director Anna Biller has written a frank, painful recollection of her days as a Japanese bar hostess in Hawaii, with plenty of resonance for her later movie career. Via Criterion.

“They react to what happens… and sometimes you expect them to collapse but they do not. Maybe I am speaking about myself: I have never known what I was going to do the day before I do it. I have never known what will happen…. Life is never predictable, and these women react out of curiosity and surprise because that’s what you do. Only fiction gives one the feeling that you know what is next. Only fiction says you are going to be happy all the time.” Isabelle Huppert talks with Amy Larocca about playing unpredictable, unapologetic women in Elle and Things to Come.

“I voted for Trump because I felt in my heart that he could really actually do a great job, but I thought Hillary was going to win…. I thought that every time he said stupid things and he acted like a fool, and all the women and things, I thought it was going to kill him. It didn’t because a lot of people are like him. Like to look at pretty girls. Wish they could talk to a pretty girl. Wish they could do this. I’ve been a Democrat my whole life. I voted for Obama twice. But this is a brilliant man. I saw a brilliant man who ran an empire, and I thought that he could run the country.” And of course the one Hollywood celebrity to come out as a supporter of Trump would be Jon Peters, giving his first interview in a decade to Tatiana Siegel and displaying how even the tens of millions of dollars he gets for doing nothing on the Superman films isn’t enough to soothe his bruised ego from the nasty things people had the nerve to honestly say about him.

Om Puri starred in over 300 movies, most of them Hindi-language pictures in his home country of India, but he also appeared in a number of British and international films after making his English-language debut in the Oscar-winning Gandhi (1982). In Britain he is best known for the mini-series The Jewel in the Crown (1984) and the films My Son the Fanatic (1997), written by Hanif Kureishi, and East is East (1999), both about immigrant experiences in England. American audiences may be more familiar with his roles in City of Joy (1992), Wolf (1994), The Ghost and the Darkness (1996), Charlie Wilson’s War (2007), The Reluctant Fundamentalist (2012), and The Hundred-Foot Journey (2014). He passed away at age 66 at his home in Mumbai. Ryan Gilbey for The Guardian.