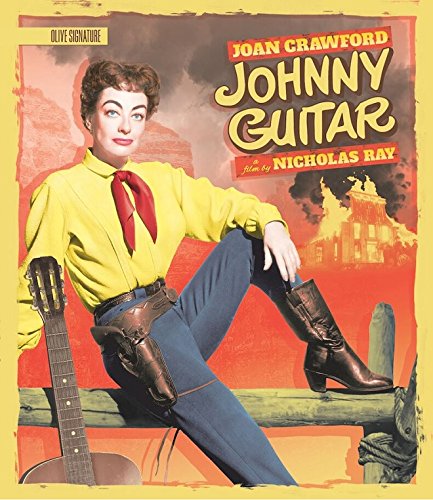 The film’s dynamic first act occurs almost entirely within the confines of the gaming room of her saloon, with characters arriving, engaging, and exiting in dramatically timely fashion, but the effect is anything but stagebound or theatrical. Ray directs the rise and fall of the drama and the interplay and evolution of stories like a symphony, a sustained piece with themes and movements that builds to the climactic kiss between Vienna and Johnny and one of the greatest lyrics ever spoken in a western: “Lie to me. Tell me you love me.”

This is a clash of wills that erupts in fire and destruction with the two players taking on roles out of a modern myth. Emma, leading a lynch mob while still in a black mourning dress, confronts Vienna, clad in a soft, white, elegant gown while playing the saloon’s piano: the dark, angry fairy tale witch taking on the innocent heroine, though Vienna is anything but innocent. And when Vienna sets the place on fire and practically dances in triumph, a black figure against the bright flames, she’s the wicked witch incarnate, but symbolism aside, the scene burns deep and hot with rage and revenge unleashed.

Jean-Luc Godard once made the claim that “Nicholas Ray is cinema.” Johnny Guitar is evidence to support his case.

Olive gave the film its DVD and Blu-ray debut a few years ago. Now it gets the deluxe treatment in a new 4K restoration and it looks amazing. The saturation of the color (and this is a film where the reds and yellows of the costumes explode from the screen) is intense and the image has magnificent a sharpness and clarity. And the film finally is released in its original aspect ratio.

New to this edition is commentary by film critic and scholar Geoff Andrew, the featurettes “Johnny Guitar: A Western Like No Other” (18 minutes) and “Johnny Guitar: A Feminist Western?” (15 minutes) with critics Miriam Bale, Kent Jones, Joe McElhaney, and B. Ruby Rich, “Tell Us Was She One of You: The Hollywood Blacklist and Johnny Guitar” with historian Larry Ceplair and blacklisted screenwriter Walter Bernstein (11 minutes), “Free Republic: Herbert J. Yates and the Story of Republic Pictures” with archivist Marc Wanamaker (6 minutes), and ” My Friend, the American Friend” with Tom Farrell and Chris Sievernich discussing Nicholas Ray (12 minutes). Carried over from the previous release is a short video introduction by Martin Scorsese, which was recorded for the film’s VHS release last century. The accompanying booklet features an essay by Jonathan Rosenbaum. 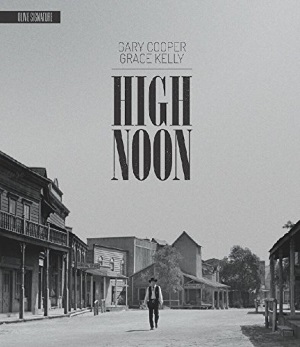 High Noon: Olive Signature (Olive, Blu-ray, DVD) – One of the westerns considered part of the canon of American greats, High Noon (1955) has been called an old-fashioned celebration of courage and responsibility in the face of impossible odds, an ironic dissection of the western myth, and a blast of moral outrage at the silence and passivity of American citizens. Howard Hawks claimed this film inspired him to make Rio Bravo, because he couldn’t fathom a sheriff who went around begging for help. There’s so much loaded weight attached to the film (from famously right-wing lead Gary Cooper to famously liberal screenwriter Carl Foreman, who was blacklisted by Hollywood) that it can overwhelm what is essentially a lean, dusty western classic set to the real time of a ticking clock, counting down the minutes until a gang of killers ride in looking for revenge on Sheriff Cooper.

New to this edition are the featurettes “A Ticking Clock” with film editor Mark Goldblatt (6 minutes), “A Stanley Kramer Production” with filmmaker and film historian Michael Schlesinger (14 minutes), “Imitation of Life: The Blacklist History of High Noon” with historian Larry Ceplair and blacklisted screenwriter Walter Bernstein (10 minutes), and he visual essay “Oscars and Ulcers: The Production History of High Noon” narrated by Anton Yelchin (12 minutes). The accompanying booklet features an essay by Nick James.