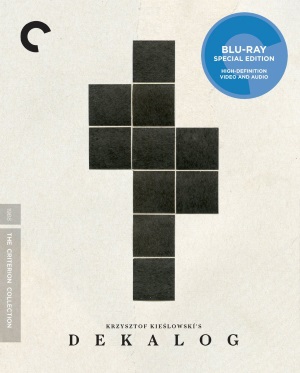 Krzysztof Kieslowski is best known for his lush, plush art-house Three Colors trilogy, a celebration of grand emotions from beautiful people, but the The Dekalog (1989), an ambitions ten-part project made for Polish TV, is arguably his masterwork: a delicate, intimate epic of tragedy and triumph among the emotionally battered proletariat of a dreary brutalist apartment complex in Warsaw. The ten stories inspired by the Ten Commandments and loosely connected by place and time are not Sunday School fables illustrating simplistic moral lessons—the connections to the individual Commandments are not always obvious—but powerful, profound stories of love and loss, faith and fear. Each hour long drama, which Kieslowski wrote with Krzysztof Piesiewicz, stands on its own as a fully conceived film

Dekalog: One explores the awakening of a young prodigy’s spiritual curiosity as he explores a new computer and starts asking the hard questions of life from his rationalist father and religious aunt. Kieslowski paints a loving, nurturing family portrait in the episode, only to shatter the peace with tragedy. In Dekalog: Two a married woman pregnant by her lover is tortured by a life-shattering decision. As her husband lays dying in the hospital, she vows to abort the child to protect her marriage if he lives, and his doctor realizes his prognosis will decide the life or death of an unborn child. These are among the most moving of Kieslowski’s tales and they form a beautiful complementary pair as they address issues of faith and spirituality more directly than any of the following episodes. Haunting images (wax drips onto a portrait of the Madonna like tears running down her cheek in Dekalog: One) express the emotions locked under the hard faces of scarred characters, until the feelings well up in profound conclusions that resonate with the passion and loss inherent in the magic of everyday life.

The next two make an even more elusive, ethereal pair. Dekalog: Three is a kind of road trip to the heart as a woman tracks down her former lover, now a married family man with a child, and pleads with him to help her find her missing husband on Christmas Eve. In Dekalog: Four the tender emotional balance between a widowed father and his grown daughter is upended when she opens a letter from her deceased mother and learns a secret that she always suspected. Curiously both hinge on lies which unbalance and upset established relationships and confessions which bring things back to a new course, stable but forever changed. These intimate stories are tender, conversation laden cameos, lovely little miniatures nestled among the more ambitious episodes of the series. Though modest in scope, Kieslowski invests each of these stories with rich emotional life as he explores the loneliness of a single woman during the holidays, a loving father’s fear of abandonment, and the confused feelings of a young adult. His sympathy buoys each resolution with a warm understanding.

The faith of a young lawyer is shaken in Dekalog: Five when he defends a man for the violent murder of a taxi-driver. It’s a provocative attempt to reconcile the gap between murder and state sanctioned execution and Kieslowski pulls no punches on either side: the murder scene is excruciating in its relentless intensity. But as he looks through the eyes of the troubled attorney who suffers a crisis in faith, the film turns inward and becomes contemplative and personal. This is no anti-Capital Punishment screed but an examination of the meaning of justice itself. Dekalog: Six is a touching and troubling story of a young, emotionally unstable postal worker who becomes obsessed with a promiscuous older woman. He steals her mail and peeps through her apartment window with a telescope, but when she returns the gaze the one way relationship becomes much more complicated. Kieslowski gets under the skin of both characters as she confronts the boy and shames him with loveless sex, and they come out the other end of the tale as humbled humans who take a harder look at themselves and a sympathetic second look each other. Both were expanded into feature-length films and released to theaters (also included in this set) but these hour-long versions stand on their own as the most potent episodes of the series.

In Dekalog: Seven Kieslowski turns “Thou shalt not steal” into the devastating story of the theft of a mother’s love and the emotional wounds left in its wake. Majka, a willowy young woman devastated by sadness, kidnaps her young sister Ania to set things straight in her charade of a life. The girl is in fact her daughter, raised by Majka’s mother Ewa to avoid scandal, but Ewa has jealously hoarded the affection of the little one, walling the real mother off from her daughter’s love. Kieslowski has never shied from painting the brutish colors of human nature, but echoing beneath the hurt and anger and selfishness of the blindly selfish Ewa and vindictive Majka is a desperate cry for love and affection. Another contentious relationship is explored in Dekalog: Eight, the story of a holocaust survivor who confronts the woman (now a renowned professor of ethics) who refused her shelter when she was young Jewish girl hiding from the Nazis in 1943 Poland. The potentially explosive issue is dealt with in direct terms, but it’s the undercurrent of faith questioned and regained that gives the episode it’s resonant beauty.

Potential shouting matches and melodramatic confrontations are quietly transformed into aching moments of emotional nakedness and painful honesty in Dekalog: Nine, a study in obsession. An impotent surgeon encourages his wife to take a lover but almost immediately becomes consumed with jealousy and suspicion, secretly monitoring her calls and shadowing her movements until he becomes paralyzed with inaction while spying on her with her callow young lover. The story of mature love seemingly doomed by noble sacrifices and protective lies and complicated by crossed signals and missed connections is capped with beautifully hushed conclusion. Dekalog: Ten is the closest Kieslowski comes to lighthearted comedy: The episode opens with a punk singer belting out a song poking fun at the Ten Commandments. The vocalist (Zbigniew Zamachowski, who Kieslowski later cast as the hapless street musician hero of White) reunites with his conservative brother over the death of their father when they discover that he’s left them a priceless stamp collection. The plot turns on a con game but Kieslowski centers the film on the brothers’ emotional journey through sacrifice, suspicion, and loss until, when all looks bleakest, they find within themselves a sense of hope and family connection. Kieslowski leaves us with humor and ends the series on a quiet, modest, lovely grace note endowed with hope.

Dekalog: Eight becomes a kind of crossroads that directly touches on other episodes of the series—an ethical problem posed in the professor’s university class is taken from Dekalog: Two and a neighboring stamp collector is the absent father buried at the opening of Dekalog: Ten—but it’s only the most obvious of the connection. Characters pass through other stories, sometimes only briefly, and themes reverberate through the series. Kieslowski explores ordinary people flailing through inner torments, hard decisions, and shattering revelations in close-up, grounding his stories in the faces of his deeply human characters. It’s ultimately a personal spiritual investigation into the soul of man and that hasn’t any answers, except perhaps a plea for compassion and understanding.

The set presents the new 4K digital restoration, mastered from the original 35mm camera negatives, presented in a theatrical revival earlier this year. It also includes A Short Film About Killing (1988) and A Short Film About Love (1988), the feature-length version of episodes Five and Six. More than simply expanded editions, they reconsider the stories with not just additional footage, but in some cases alternate footage.

Also includes a 30-minute featurette on the visual rhyming through the series by film studies professor Annette Insdorf, a gallery of archival interviews with director Krzysztof Kie?lowski, and new and archival interviews with Dekalog cast and crew, including co-writer Krzysztof Piesiewicz, thirteen actors, three cinematographers, editor Ewa Smal, and Kie?lowski’s confidante Hanna Krall, plus a booklet featuring an essay and film analyses by film scholar Paul Coates and excerpted reprints from Kie?lowski on Kie?lowski.