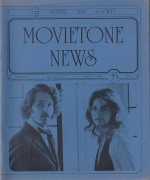 The Garland–Elkins production of A Doll’s House is one of two screen adaptations of Ibsen’s play to be released this year, presumably to cash in on the women’s liberation market. Joseph Losey’s film, which will reach Seattle by way of the video screen, is an adaptation for the screen in every sense of the term. Garland’s effort, on the other hand, is more a film recording of Elkins’s Broadway production of the play, starring Elkins’s wife Claire Bloom. The exasperating thing about it is that it can’t make up its mind whether to be a filmed play or a movie. The stifling atmosphere of confinement, especially important to a play in which the seen world onstage represents a world in which the protagonist is trapped, is retained for about the first third of the film, Garland keeping all the action within the walls of Torvald Helmer’s house. Thereafter, we get exterior shots, first glimpsed through windows and finally photographed by cameras in the street. Garland yields to the temptation to cut away to Krogstad’s shabby flat, and yields again; and before the film is half over the mystery of the outside world and the sense of confinement in the inner world are both lost. Presumably the increasingly frequent glimpses of a world beyond the Helmer household are intended to move us smoothly toward Nora’s departure from her husband’s house and her entry into that outer world. But this is a violation of the play itself, on two counts. First, Nora’s break from Torvald and her children is sudden, not gradual. And second, her departure is based not upon a growing awareness of the other world but a stifling disenchantment with the inner world, which, in the play, is the only world she sees and moves in.

The dialogue of the film is, on the surface, quite faithful to Ibsen: but it has been injected with all kinds of innuendo to underscore—to the point of obviousness—its similarity to the contemporary dialectic of women’s liberation. Never mind that Ibsen’s play is about the state of capitalistic marriage, not about the oppression of women: women’s lib is now where the money’s at. Thus we get an unbearably protracted final confrontation between Nora and Torvald, which becomes less an agon than a belabored philosophical debate, emphasizing again and again its similarity to the language of today’s feminism, belying its 19th-century Scandinavian milieu. Similarly, the film’s mise-en-scène is perfectly evocative of a Norwegian household in wintertime over a hundred years ago, but the rich color with which it is photographed lends a feeling of unreality and a softness which belies the severity of Ibsen’s conception.

The film’s best achievement is its casting. Claire Bloom, in every way right for the part, still seems too vacant to justify her character’s ultimate action; but Anthony Hopkins’s smooth Torvald is consistently strong. Sir Ralph Richardson is an endearing Dr. Rank, but not quite crusty enough; he’s good in the same way that an appetizer is before the main feast: his performance left me eager to watch Trevor Howard play the role in Losey’s film. Anna Massey is arresting as Mrs. Linde, and Dame Edith Evans, though scarce, is a solid nursemaid. The day is won, however, by Denholm Elliott’s Krogstad, an alternately pathetic and malevolent character whose balance is so deftly maintained by Elliott that he emerges as the film’s most affecting, sympathetic and interesting persona. This is enough to save the film for the viewer who enjoys fine acting, but the contributions of the picture are so negligible as to raise the question why it was even made, unless as a gift from Elkins to his wife.