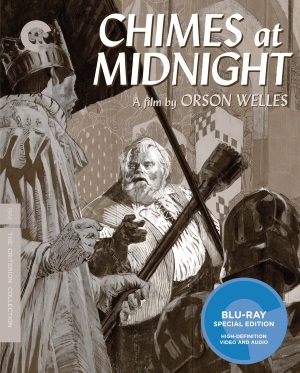 Drawing freely from five Shakespeare plays (notably “Henry IV, Part One” and “Henry IV, Part Two”) as well as excerpts from “Holinshead’s Chronicles” (spoken in the film by Ralph Richardson), the story focuses on young Prince Hal (Keith Baxter), son of King Henry IV (John Gielgud) and heir to crown, and his wastrel years spent carousing in taverns with Sir John Falstaff (played by Welles), a corrupt, drunk, cowardly old rascal whose boisterous personality and zest for life captivates Hal. When Henry Hotspur, who claims to be the rightful heir to the throne, goes to war against King Henry, Hal finally turns his back on his extended childhood and accepts his responsibility as Prince and future King of England. Jeanne Moreau and Margaret Rutherford co-star in small roles that enliven the scenes of Falstaff’s tavern existence.

Welles had first attempted an epic portrait of the entire history cycle on stage in 1939 and then pared the scope down to the story of Falstaff and Hal in a 1961 stage production in Ireland, which he saw as a dry run for the film. Keith Baxter, then a young Welsh actor just making his name on the stage, played Hal on stage opposite Welles’s Falstaff and Welles promised the actor that he would never make the film without him. He was true to his word and you wonder if the marvelous affection between the characters is in part a reflection of the love shared between the two men off screen. Welles’s screen portrayal—with a wild head of snow white hair, a gut padded until he resembles a peasant Santa Claus, and a bulbous nose red with drink—is possibly his greatest screen performance. He creates a magnificent vision of 15th century England on a relatively small budget in 1964 Spain, using standing castles and open fields and careful framing and editing, and he contrasts the cold majesty of court, shot in vast chambers and against stone castle walls and spires, with the warmth of Falstaff’s life in a tavern of massive wooden beams and tables and in the nearby forests.

Welles loved contradictory characters and ironies and Chimes at Midnight is one of the great contradictions. Falstaff is a jolly rogue with a twinkle in his eye and a gusto for living that is alien at court, but he is also a thief, a liar, a braggart, and an opportunist who brazenly takes credit for Hal’s heroic triumph in the field of battle. Welles views Hal’s eventual rejection of Falstaff as tragedy and as necessity and most Welles critics and scholars tend to agree. I take a minority position: there is no tragedy in the act. Hal grew up and rejected selfishness and immediate gratification for responsibility and maturity. Falstaff remained as corrupt and corrupting as ever. The tragedy is that Hal must lose this element of joy and fun and irresponsibility to become the leader his country deserves. Part of beauty of Welles’s powerful portrait is that even Falstaff recognizes the necessity. Watch the famous rejection scene (“I know thee not, old man”) and you can see a glimmer of pride in Falstaff’s face even as he’s humiliated in front of the court.

Chimes at Midnight is one of Orson Welles’ unqualified masterpieces, his greatest film according to many critics, and a personal project that took decades to finally bring to the screen. If you’ve never tried to see the film before this restoration and new rerelease, it may be readily apparent just how magnificent this presentation is. Very difficult to see under any circumstances, the few 35mm screenings were limited to battle-scarred prints with murky soundtracks. Janus films (a partner with Criterion) applied digital technology to the new restoration to master their digital prints for the U.S. and that is the source of Criterion’s special edition. The Blu-ray and DVD debut also features commentary by film scholar James Naremore, which is filled with production history and acute observations, new interviews with actor Keith Baxter (about half an hour), Welles’s daughter Beatrice Welles, who has a small role in the film as a page (14 minutes), and Welles historians Simon Callow (31 minutes) and Joseph McBride (26 minutes), and an excerpt from the September 21, 1965 broadcast of The Merv Griffin Show featuring Welles as he was editing the film. The essay by Michael Anderegg, author of Orson Welles, Shakespeare, and Popular Culture, is on a fold-out insert rather than a booklet. 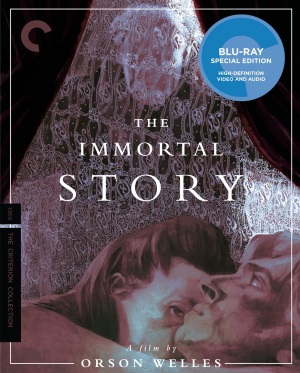 The Immortal Story (Criterion, Blu-ray, DVD), based on a short story by Isak Dinesen and adapted to the screen faithfully by Welles with only minor changes, was produced for French TV in 1968. It runs just under an hour and stars Welles as Mr. Clay, a rich, misanthropic merchant in Macao who becomes obsessed with turning an old seaman’s legend, the story of a rich man who hires a sailor to impregnate his young wife, into a reality. He directs his clerk (French actor Roger Coggio) find a woman (Jeanne Moreau) to play his wife and himself hires a sailor (Norman Eshley) off the streets to play the young man, and he takes the role of the rich old man himself.

Like many of Welles’ films, it’s about a powerful man who uses his money and influence to attempt to control those around him, and it is equally about stories and storytelling, with Clay himself taking the role of director. Also like Welles’ previous European films, much of the film is post-dubbed, with Welles himself providing the voices of some of the minor characters (such as Fernando Rey, who is in a brief scene plays a part of the town’s chorus of merchants who give us Mr. Clay’s history).

In other ways it is very different. Welles was famous for his elaborate camerawork and bold images staged in both foreground and background and visual contrasts of light and dark. This film, his first shot in color, is more unadorned, with the camera mostly still, the sets austere and stripped down, and the compositions more flattened on a shallow plane. It also features the first genuinely erotic moments in Welles films when the sailor and the woman make love, a scene that features close-ups and a cinematic intimacy that contrasts with the distance that Welles takes with the other scenes. This is a rumination on art and reality and stories and it is dreamlike and ephemeral and introspective.

While it can be considered a minor work by Welles, at least in comparison to his celebrated masterpieces, it is his final completed dramatic feature (his subsequent features are both essay films) and a small jewel of a film that shows a different aspect of the filmmaker. It used to play in arthouse repertory calendars paired with Luis Bunuel’s Simon of the Desert (which also ran just under an hour) and essentially disappeared with the demise of repertory cinema.

Never before on home video in the US, the film debuts on Blu-ray and DVD in a special edition from Criterion mastered from a new 4K master from the original 35mm camera negative. The disc features the alternate French language version, which is about minutes shorter and dubbed; Jeanne Moreau’s voice is in both versions but Welles’ voice is dubbed over by another, anonymous actor. Also features commentary by film scholar Adrian Martin, the 1968 documentary Portrait: Orson Welles by François Reichenbach and Frédéric Rossif, and interviews with actor Norman Eshley, cinematographer Willy Kurant, and film scholar François Thomas, plus a fold-out insert with an essay by the perceptive Welles critic Jonathan Rosenbaum.