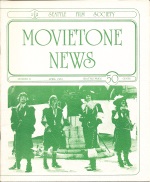 Joyce at 34, the half-hour personal film accompanying I.F. Stone’s Weekly at the Movie House, is touted as a feminist film. Believe me, the cause has had better exponents. This little piece of autobiography concerns the 34-year-old filmmaker’s decision to have both a baby and a career, and chronicles the first months of her life as a working mother. The film presents arguments for and against having both job and child in the form of ill-thought-out “soul-searching” and selfrighteous emotionalism insulting to the intelligent viewer. The conclusion is right, but the approach is both shabby and wrong. There is a lot more to feminism than a gaggle of self-serving yentas talking over coffee about raising children and finding jobs during the depression.

Visually, the film is grainy and rough, its colors garish and unbalanced (an eyesore compounded by the aggressive homeliness of Joyce and her mishpocheh, their apparently hereditary ugliness rivaled only by their rampant superficiality). Joyce at 34 fails as convincing feminism because it is so unabashedly middle-class in its values and attitudes. What the film-portrait reveals is not a liberated woman but an egocentric bourgeoise who has enough money to film herself almost incessantly, to produce and distribute these self-important home movies, and thereby to call herself “filmmaker.” A representative example of her “filmmaking” is a tacky, tasteless montage in which a peekaboo shot of Joyce, bare to the waist, bathing her baby, is followed by a close shot of the baby in the tub, followed in turn, as the baby turns her tochis to the camera, by a quick cut to a skillet of frying chicken livers. Perhaps Joyce finds this funny. I find her filmmaking as irresponsible as her life.

JOYCE AT 34
A Film by Joyce Chopra and Claudia Weill.