A couple of months back I reviewed two Film Noir Foundation restorations of orphaned films—that is, films that were produced independently, outside of the studio system, by entities that no longer existed. With no one left to protect and preserve them, they fell into the public domain and the original elements were lost or neglected. Here are two more film noir rescues and restorations, these by Martin Scorsese’s The Film Foundation. 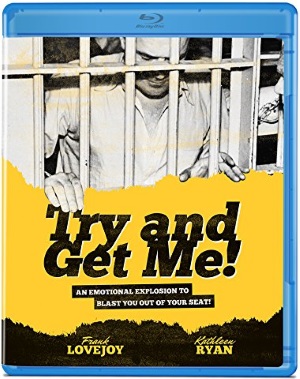 Try and Get Me! (Olive, Blu-ray, DVD), originally released under the title The Sound of Fury, is a 1950 take on the lynch-mob dramas of the thirties dosed with post-war anxiety and sociopathic anger. Frank Lovejoy, one of the everyman actors who took the lead in low-budget crime and action movies of the 1940s and 1950s as the straightforward moral center, stars as Howard Tyler, an out-of-work husband and father in a small California town, desperate to find any job to get his family out of debt (they owe the grocer and the landlord). Killing time over a beer in a bowling alley bar, he meets snazzy-dressing, glib-talking Jerry (Lloyd Bridges), a preening narcissist who flexes his muscles and admires himself in mirrors as he dresses up, slaps on cologne, and parades in front of Lovejoy as if fishing for compliments. He knows a guy, he says, who needs a guy for a job. He’s the guy, it turns out, and the job is wheelman on a gas station robbery. It’s the first step in a lucrative but doomed partnership with a sociopathic peacock who has plans for a big score.

This is a drama set in the disillusionment of the American Dream in the post-war years, with a guy who has moved from the Boston home to find work in the California employment boom that has already ground to a halt. Lovejoy isn’t the most expressive or magnetic performer—he’s often a well-meaning stiff—but he has a bedrock blue-collar, working class quality that director Cy Enfield uses well as the everyman gets eaten up with anxiety and guilt after Jerry’s big plan takes a sudden turn into murder (a particularly sadistic one). Bridges plays the part with a mix of charismatic confidence and power trip, a egotist who sees everyone around him as a potential mark and every job as a necessity to keep him in cufflinks and cash to splurge on high-living. Meanwhile Howard drinks to deaden himself with inevitable consequences.

That’s only half the movie. Paralleling their story is that of newspaper reporter Gil Stanton (Richard Carlson), a journalist who has just been handed a column and uses it to stoke outrage over the crime wave that ends in a high-profile kidnapping and murder. He’s the everyman of the educated, high-earning classes, so sure in his moral position that he never notices how he has fanned the flames of anger and violence into a conflagration until it burns out of control. His debates with a visiting European scientist (Renzo Cesana), who brings the lessons of Europe’s past to the argument, and with his editor (the always great Art Smith), who justifies it all by the increase in sales, aren’t subtle and Enfield can’t do much with them, except to contrast the bloodless conversation and Gil’s arrogant self-righteousness with the explosive fallout in their city.

Try and Get Me! is one of the great lynch mob movies ever made and one of the most caustic social commentaries of anxiety and fear. It’s inspired by a real-life incident and Enfield directs the riot with a kind of newsreel realism that plays down the melodrama and theatrics of earlier films, giving the climax an unnerving quality. The outrage and anger feeds itself until there is no sense of individual action in the escalation. And this is one bit of salacious retitling that improves upon the original and suggests the anger and noir desperation that the film so beautifully generates.

It makes its debut on both Blu-ray and DVD in an edition mastered from a restoration by The Film Foundation. It looks excellent. Film noir tends to show it wear more than other genres thanks to all the scenes of night and shadow and this film looks clean and sharp with excellent contrasts. There are no supplements. 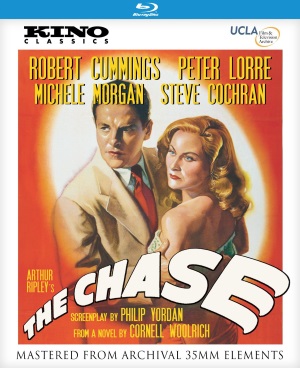 And speaking of movie titles, The Chase (Kino Classics, Blu-ray, DVD) (1946) is one of the many films to sport this rather generic title and it is, shall we say, a rather inaccurate description of this nightmare noir adapted from the Cornell Woolrich novel The Black Path of Fear. Robert Cummings stars as a shell-shocked World War II vet Chuck Scott who, hungry and broke and down-on-his-luck, finds a lost wallet and returns it to the owner, who happens to be Miami mobster Eddie Roman (Steve Cochran in a pencil mustache). Eddie is a guy with a soft spot for vets and a blind spot when it comes to his wife Lorna (Michele Morgan), who is plotting her escape form Eddie’s smothering clutches. Chuck’s job is ostensibly to chauffeur Lorna around, but it’s really to keep tabs on her, and the perpetual look of misery and anxiety on her face persuades Chuck to switch allegiances and help her flee to Havana.

The stories of Woolrich were a rich source for film noir and paranoid thrillers—literally dozens of movies and TV shows were made from his work—and this is one of the most Woolrich-ian as it slips from dreamy romantic thriller to paranoid nightmare noir. Director Arthur Ripley, working from an adaptation credited to Philip Yordan, turns Havana into network of underworld operatives just waiting to send the next unwitting victim into a web of terror. The great director of photography Franz Planer plunges this sequence into the darkest nocturnal urban jungle you’ve ever scene, a mad city playing upon your worst fears.

Fighting his way through it all is Robert Cummings, the most unlikely of noir heroes. He’s the affable, good-natured guy next door suddenly dropped into a crime story who has to play the part just to survive it. He never comes off as tough, knocked about, or even street smart (something Dick Powell managed to pull off very nicely with his deadpan approach), but you can’t help but root for him to come out all right. Cochran’s gangster is your usual two-bit thug with money and style and more ego than brains and Peter Lorre has a supporting role around the edges and delivers more personality and character than all the leads put together.

If you think of movie narratives like Edward G. Robinson describes a murder in Double Indemnity, as a train ride you can’t get off until the end of the line (“they got to ride all the way to the end of the line and it’s a one-way trip and the last stop is the cemetery.”), The Chase veers off on a side-line without the passengers ever realizing, taking them into a dark, twisted route that finally crashes into a dead-end. Which, as it turns out, isn’t even the end of the movie. In fact, it practically comes to an abrupt halt and gets a jumpstart, grounding it back in a more familiar world while sending it off on another bout of madness and a conclusion that ostensibly plays as a “happy ending” yet could be the beginning of a whole new nightmare. Just look carefully at the film’s last image and remember that you’ve been it before….

The Chase has been around for decades on VHS and DVD in inferior (and some downright miserable) editions. The Film Foundation funded a restoration in 2012, which was undertaken by the UCAL Film & Television Archive, and the results are a quantum leap in quality from those earlier versions. While it will likely never look as good as the great studio noirs, it is clean and clear and damage free, with restored contrasts that pulls the sea of shadow of the film’s nightmarish from the swamp of earlier versions and reveals the gorgeous photography of Planer.

On Blu-ray and DVD, with commentary by filmmaker Guy Maddin, who provides appreciation along with a little background on the film and the players, and two radio adaptations of the story (one of them starring Cary Grant!).