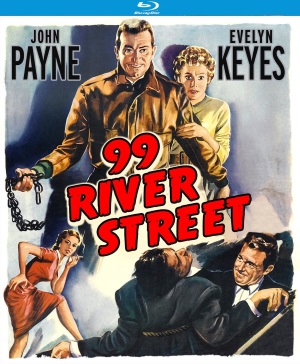 Along with the working class milieu and the blue collar loyalty of his dispatcher buddy Stan (Frank Faylen in upbeat form) and still-idealistic young actress Linda (Evelyn Keyes), a buddy from his coffee-shop breaks, Karlson gives this brawny noir a shot of theatrical flair that joins it, if only momentarily, with a rarified sub-genre of noir where the exaggerated melodrama of theater and actors gets tangled in the “real world” of troubled characters, personal betrayal and criminal threats. Linda, so wrapped in her own dreams, twists the knife in wounds she has no idea even exist when she pulls Ernie into her world of make-believe, but redeems herself by using her talents (and putting herself on the line) with a performance in the theater of life.

Payne has never been better than here as the salt-of-the-earth mug who had his shot at the top, was knocked back, picked himself back up, and returned to his blue-collar roots as a cab driver now saving for a gas station. But echoes of the fight that ended his career bounce around head and his anger over being played a chump explodes in a ferocity that almost blows his chances. Though once a light, blandly handsome lead in musicals and romantic comedies, Payne remade himself as a taciturn post-war tough guy and used his broad-shouldered physique and the strength of his physicality to make himself a formidable action hero. He’s as convincing a boxer as you’ve seen in the movies and the film plays on that identity—and the fury driving his desperate search to clear his name and save his life over the long night on the rough city streets and waterfront dives—to give the fight scenes a brutal ferocity.

While shot largely on studio sets, 99 River Street is one of the great urban noirs of the anonymous city. Taking place entirely at night, on city streets and waterfront docks, in corner coffee shops and cheap bars, boxing gyms and taxi garages, Karlson casts it all in shadow and fills it with the shady characters and criminal elements that come out at night. He makes brilliant use of the boxing ring play-by-play, which comes back as both tormenting memory and triumphant commentary in a superbly-executed climax. And he fills the soundtrack with a superb audio atmosphere of urban sounds echoing through the background, giving the film a far more modern quality than many of its era.

Previously available on DVD from the MGM Limited Edition Collection, a burn-on-demand DVD-R service, it comes to Blu-ray mastered from a new HD transfer and that alone makes it a significant upgrade, but Kino Lorber also adds a new commentary track from film noir historian Eddie Muller, now becoming a veteran of these things. Muller is pretty good at this, stirring in backstory and production notes with critical observations. Also includes trailers. 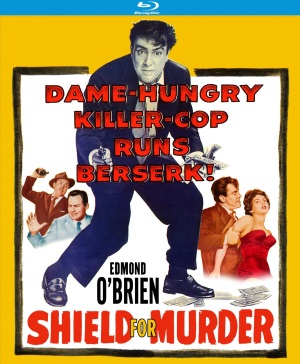 In the opening minutes of the 1954 Shield for Murder (Kino Lorber, Blu-ray, DVD), Edmond O’Brien stalks, murders, and robs a bookie. Then he gives himself an alibi: he’s a cop and he was chasing an criminal. That sets the scene for the directorial debut for both actor Edmond O’Brien, who also stars as Detective Lt. Barney Nolan, the violent, angry cop, and producer Howard W. Koch, who apprenticed as an assistant on (among others) the early B-movie film noirs of Anthony Mann.

Barney is the classic bare-knuckle, brutal, burn-out of a career cop and we catch him the moment he finally tips over from brutality to outright corruption when he uses the badge to rob a small fortune from the city’s numbers king. While his partner Mark (John Agar) investigates his shooting, Barney goes after a witness who comes forward and a couple of thugs with PI badges and gun permits (one of them played by an insolent Claude Akins) comes after Barney. And, of course, we find the human side of Barney that has made Mark to loyal to him. It’s almost poignant that the big dream he robbed for is no more than a suburban tract home to make a life with his girl (Marla English). We first meet her wearing a leggy cigarette girl outfit but she’s actually a sweet girl who actually loves Barney, and all he wants to do is get his piece of the American Dream and a middle class life. When it all goes south, Barney goes underground and turns to the underworld to get him out of the country, while the thugs keep looking for him. There’s a superb shoot-out and chase through a high school swimming pool doing night duty for adult swim.

It’s effectively directed from a tough script co-written by John C. Higgins, who wrote Anthony Mann’s early noirs T-Men (1947), Raw Deal (1948), and Border Incident (1949), and here offers a pretty stark corrupt cop drama that remembers the bad cop was once a good cop and still has glimmers in him. The location shooting on the streets of Los Angeles gives the movie that docu-texture of a certain strain of noir, with night shoots letting the minimal lighting and the headlights of cars create pools of light in a world of darkness. It’s fitting that we only ever see the housing development with the model home of his dreams, essentially a phony life laid out as a promise, at night, like it’s nothing more than a dream in the darkness.

Carolyn Jones has a fun scene as a flirty barfly who grabs onto Barney as he hides out in a seedy club, and you can spot William Schallert (Patty Duke’s TV, who just passed away this year) as the Assistant D.A. and Richard Deacon (The Dick Van Dyke Show) as The Professor, unbilled but unmistakable.

Makes it Blu-ray and DVD debut in a newly remastered HD transfer. There is some scuffing and wear and what appears to be the beginnings of chemical degradation through the film, especially against the black of the night scenes, but the black-and-white contrasts are solid and the image crisp. No supplements beyond trailers. 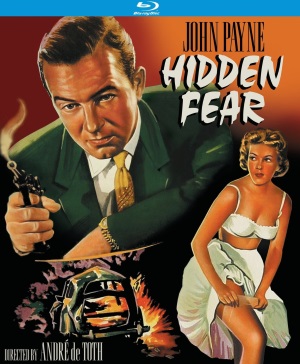 Hidden Fear (1957) (Kino Lorber, Blu-ray, DVD), directed by Andre de Toth and starring John Payne as an American cop in Denmark, is one of the international productions that brought American talent to European films. The central cast is largely from this side of the pond (Alexander Knox and Conrad Nagel as the gangleaders) shooting on location in Copenhagen with a largely European production crew. Mike Brent (John Payne), as hard-knuckle an American name as there is, has come to Denmark to clear the name of sister (Natalie Norwick), who is charged with the murder of her partner in her nightclub act. It all races back to a counterfeiting ring and Mile goes undercover to find the boss. Andre de Toth made a lot of tough westerns where the violence had a sharp edge, and he did the same with film noir, but this is more like a crime procedural than a film noir and it looks more like a TV show than a movie, with its limited sets and tight shots. You wonder how much of that is the Danish studio style and how much is a matter of budget and time. It’s interesting as an artifact and I have a weakness for American crime, but this is a little lifeless.

The new HD transfer is mastered from an unrestored print with some image fading and damage. It’s perfectly fine and probably the best we’ll see of this film. No supplements beyond trailers.