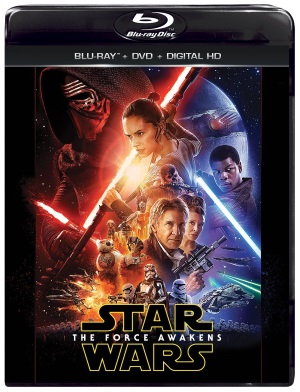 Star Wars: The Force Awakens (Walt Disney, Blu-ray, DVD, Digital HD) – J.J. Abrams takes over the reins of the Star Wars franchise with what is technically a sequel (“Chapter VII: The Force Awakens”) but is just as much a course correction, a reboot, and a return to the source. It’s been called a shameless remake of the original Star Wars and refreshing return to the innocence and energy and pulpy fun that first entranced a generation of fans. I lean toward the latter, but even for those who find it rehash, I would point out that The Force Awakens is not aimed at the adult fans who grew up on the original trilogy all those decades ago. I’m one of those who saw the film on its first run and was thrilled by it. I think that Abrams is trying to recreate that experience for a whole new generation eager to be captured by the charge and action and exotic Amazing Stories covers come to life in a fairy tale space fantasy that takes place long ago and a galaxy far, far away…

To that end, this installment (set 30 years after Return of the Jedi) picks up with another scrappy kid from a desert planet who finds a runaway robot with secret plans and escapes from the resurgence of the Republic with a hunk of junk ship that just happens to be the Millennium Falcon, teams up with Han Solo (Harrison Ford) and Chewbacca (Peter Mayhew), who are still smuggling and scamming through way through the galaxy well past retirement age, and joins the resistance under the command of Leia (Carrie Fisher). This time, however, the kid with the essence of the force within is a spunky, inventive young woman named Rey (Daisy Ridley) and her running buddy is a former Stormtrooper named Finn (John Boyega) who goes AWOL after his first mission, which turns into a pitiless massacre of innocents.

The echoes with the original Star Wars are unmistakable to any fan; there’s a bar filled with mercenary alien types (which Abrams creates largely with old-school make-up and masks), an even bigger and badder Death Star, a masked Darth Vader acolyte (Adam Driver as Kylo Ren) who leads the new Imperial army with the help of the dark side of the force, and yes, those plans reveal the weakness in the new planet-killing weapon. Abrams is clearly devoted to recapturing not just the mythology and style of Lucas’ original trilogy but the innocence and energy and fun. After trying to steer the Star Trek prequels into the Star Wars universe, he’s found the right vehicle for his instincts. But while he honors the original, he adds (with the help of co-screenwriters Lawrence Kasdan, who scripted Empire and Return of the Jedi for Lucas, and Michael Arndt, who scripted Toy Story 3) some terrific touches and colors of his own.

The cast is far more inclusive than Lucas’ films, starting with our next generation heroes Rey, a capable and fearless young woman, and Finn, a young black man whose conscience pushes him to find courage he didn’t know he had. Oscar Isaac charges in as smart-talking flyboy and charismatic rebel hero Poe Dameron and leaves you wanting more (we’re sure to see more of him in future films). The roly-poly BB-8 is a delightful creation that rethinks the robot paradigm with both practical innovation and creative playfulness. And all those fabulous planetary landscapes and alien skies recall the wonder of Lucas’ visions without simply rehashing them.

So yes, there is a familiarity to it. This isn’t a rethinking of the space opera and Abrams doesn’t try to take the Star Wars universe into a more mature direction. But perhaps that is as it should be. We’ve already got comic book movies trying to rework the superhero mythos for adult audiences. Star Wars: The Force Awakens is aimed at the child within us all.

On Blu-ray and DVD with a superb transfer. The three-disc Blu-ray edition features the 69-minute “Secrets of The Force Awakens: A Cinematic Journey,” which chronicles the production from the development of the story through filming, and a collection of shorter featurettes, all under ten minutes apiece. “Crafting Creatures,” “Building BB-8,” “Blueprint of a Battle: The Snow Fight,” and “ILM: The Visual Magic of the Force” are production pieces that take the viewers into the creation of key scenes and special effects. “John Williams: The Seventh Symphony” looks at the composer who defined the music of the series from the first film. “The Story Awakens: The Table Read” features only brief excerpts from the first table read with the entire cast in a four-minute piece and there are six deleted scenes.