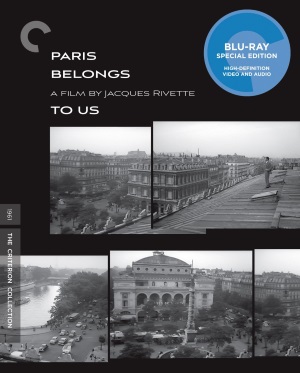 There’s an intent seriousness to Paris Belongs to Us (and his sophomore feature, The Nun) that Rivette largely leaves behind with his subsequent features, which incorporate puzzles and a sense of play in his engagement with his conspiracies taht are less paranoid fears than literary themes escaped into the real world. Paris Belongs to Us, in contrast, is graver and a sense of despair takes over the artists and intellectuals who gather at parties to mourn the latest suicide of a colleague. The title itself is sourly ironic given the paranoia, the disappointment, the conspiracies, even the theatrical endeavor that, after struggling to find any stability, is smothered by its acceptance into the “legitimate” theater. Even the atmosphere (at least outside of the theater rehearsals, where a spirit of creativity remains) seems to breed disillusionment, with gray, overcast skies and chilly days. Paris does not belong to them at all. It belongs to the powerful, not the dreamers, and they powerful crush the spirits of the artists and idealists. Rivette’s attitudes evolved into something more hopeful even in the face of death in his later films.

Perhaps that’s why Rivette changed the way he made films later in the decade. Paris Belongs to Us is tightly scripted and directed. Out 1 and Celine and Julie Go Boating also engage in theater, conspiracies, obsessions, and playing detective to unravel a mystery, but they were launched with outlines rather than scripts, written along the way with the actors shaping the characters and suggesting the direction of the story. Films are collaborative efforts under any circumstances but Rivette clearly found his inspiration in greater collaboration, and the creative abandon of his later films have a more playful spirit and optimistic approach.

Yet for all the disillusionment of Paris Belongs to Us, there is a spirit of creativity and an existential sense of mystery. Why are the cops chasing Philip? Why has the tape of Juan’s guitar music gone missing, and what’s on it? What is Pierre’s part in all this? What exactly is this vast conspiracy? Schneider brings a spirit of curiosity and innocence to this little society that, for all its intellectual and artistic bonafides, is stuck in self-observation, and her detective work gives the film momentum. It’s a shame she did not continue on as an actress.

It should have been one of the first feature from the group of critics-turned-filmmakers—it was shot in 1958—but wasn’t released until 1961 for various reasons. By then the nouvelle vague had become defined by the fresh, spirited lyrical realism of Truffaut and the genre-busting and narrative experimentation of Godard and Rivette’s film, in many ways a reflection on the end of the fifties, looked decidedly conventional. Which is most certainly is not. It’s an accomplished, engaging, fascinating portrait of Paris at the end of the 1950s as the arts seem mired in tradition and political and social energy is suppressed at all levels. It’s interesting to see Rivette at the beginning, of course, but it is also engaging to see a different kind of cinematic rebellion, one that indicts the culture itself for its conservatism and fear of new ideas and innovation, the very thing that the nouvelle vague brought with a vengeance. Rivette captures the culture that the nouvelle vague rebelled against.

It’s also fun to go cameo spotting. Among the guests in the opening party scene are Claude Chabrol and Rivette himself, Jean-Luc Godard is a man at a sidewalk café interviewed by Anne, and Jacques Demy is also supposed be in the film (though I did not spot him myself).

Criterion presents the US home video debut of the film in a new 2K digital restoration mastered from the original camera negative. Presented in the old Academy ratio of 1.37:1, it’s like a throwback to classic movies with a modern sensibility. It looks lovely, capturing the often shadowy, overcast atmosphere of his Paris, but you may also notice grit and artifacts in some shots, elements that disappear at the next cut. Just as the new restoration of Rivette’s Out 1 (released stateside by Kino earlier this year), the folks behind this version remain true to the restorer’s job, which is to come as close to possible returning the film to the same state as its day one premiere. These imperfections reflect the realities of its production and whether or not Rivette would have removed them had he the technology at the time, it’s not up to the engineers and restoration producers to second guess him. Curiously, it’s the only part of the production that shows its low-budget, independent origins. The images are lovely, clearly carefully composed and beautifully shot by Charles L. Bitsch (who went on to become an assistant director for Claude Chabrol, Jean-Luc Godard, and Jean-Pierre Melville).