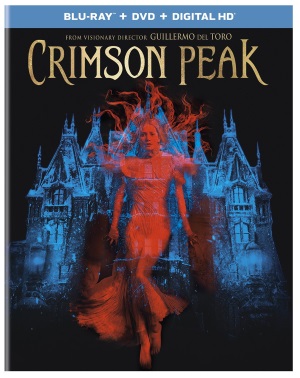 Though it draws inspiration from Rebecca, Notorious, and Jane Eyre, the sensibility is pure Del Toro. Not the American action movie maker but the creator of The Devil’s Backbone and Pan’s Labyrinth, Spanish horror films of dark fantasy where the supernatural and the otherwordly are beautiful and horrible and terrifying but largely benign. Ghosts are not malevolent monsters or vindictive demons but tormented, tortured beings lost in grief that keeps them stuck on earth, pinned like an insect to the location of their death. It is humans who bring evil into the world.

This is old school gothic melodrama with modern movie magic. It’s not subtle, and that’s the point. It is grand and glorious and emotionally outsized, elegantly and delicately florid and Gothic. The ghosts are corpses of blood-red bone and rotted flesh with the markers of their past human lives evaporating around them like gossamer silk dissolving in the air. It didn’t find favor with audiences weaned on more malevolent horrors but I loved it, from its creeping, old-world pace to its deliciously realized metaphors to its steadfast belief in the power of the love to transform the most wretched soul.

Beautifully mastered on DVD and Blu-ray, which preserve the intricate textures and vivid, defining colors of the film, with commentary by filmmaker Guillermo Del Toro (whose pride in his work shows through), the featurettes “Beware of Crimson Peak” (a seven-minute guided tour through the manor) and “The Light and Dark of Crimson Peak” (about the set designs and color schemes), and five deleted scenes.

The Blu-ray also includes the four-part “I Remember Crimson Peak,” which looks at four key locations with short featurettes of about five minutes apiece, plus “A Primer on Gothic Romance,” “Hand Tailored Gothic” (on the film’s costumes), “A Living Thing” (the longest of the featurettes, examining the creation of the mansion), and “Crimson Phantoms” (on creating the ghosts), plus bonus DVD and Ultraviolet Digital HD copies of the film.
Crimson Peak [DVD]

Also on Cable and Video On Demand from Amazon Video and other VOD services.