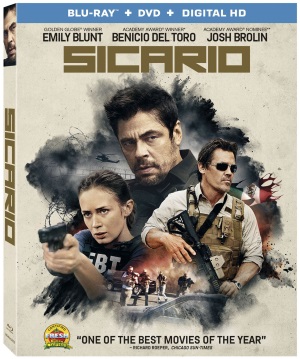 This is a world of sudden violence and brutal retaliation, yet apart from the opening scene, Macer is a frustratingly passive character in the midst of the action. She’s a proven warrior yet mostly serves as witness to the events, a point of view character and the moral high ground in a war where the rules of engagement are at best ambiguous.

Director Denis Villeneuve, a Québécois filmmaker who came stateside to direct Prisoners and Enemy in 2013, tends to ignore the holes and inconsistencies in the screenplay and focuses on the combustible atmosphere. This is a film built on a foundation soaked in nitroglycerine; every situation seems pitched on the verge of combustion. Early in the film, as they drive a recently captured suspect back over the border to the American side, the caravan gets blocked in the traffic crunch at the checkpoint. Every car around them carries a potential cartel soldier and Villeneuve brilliantly orchestrates the tension as all eyes rake the freeway for threats.

It’s that tension, enhanced by Villeneuve’s constant surveillance of every space these characters inhabit, as if viewing the world through their military vigilance, that keeps the film walking the knife’s edge and keeps the audience riveted to every scene. You never know when things will explode. You just know they will.

Blu-ray and DVD, with the desert-baked digital cinematography by Roger Deakins beautifully preserved in the HD transfer. There are four featurettes, all presented in HD, that add up to just over 50 minutes of supplementary material. “Stepping Into Darkness: The Visual Design of Sicario” focuses on crafting the film’s look and defining cinematography, “Blunt, Brolin and Benicio: Portraying the Characters of Sicario” features interviews with the three leads, “Battle Zone: The Origins of Sicario” researches the brutal history of drug violence along the border (it features graphic imagery so beware), and “A Pulse from the Desert: The Score of Sicario,” which runs about 6 minutes, profiles composer Jóhann Jóhannsson. The Blu-ray also features bonus DVD and Ultraviolet Digital HD copies of the film.