Chaplin’s Essanay Comedies (Flicker Alley, Blu-ray+DVD) – In 1914 Charlie Chaplin, the most famous comic performer in Mack Sennett’s Keystone Studios, was lured away by Essanay Studios with a huge increase in salary and the promise of creative freedom. Chaplin made the most of it and you can watch his evolution over the course of the 14 official shorts (and one unofficial short) of this collection, all produced in 1915. This is the American Blu-ray debut of the films from newly remastered editions, a project undertaken in collaboration with Lobster Films, David Shepard and Blackhawk Films, and the Cineteca Bologna.

Chaplin stars with Ben Turpin in His New Job, set at a movie studio, and A Night Out, where they play a pair of sloppy drunks raising havoc at a posh eatery. Edna Purviance, who co-stars in all subsequent Essanay shorts, joins Chaplin with The Champion, where a hidden horseshoe in a boxing glove promotes the tramp from sparring partner (“This gink wants his face kalsomined,” reads one particularly rich title) to challenger to the boxing title. In the Park, a shapeless gag fest where the tramp crosses paths with a pickpocket (identified as “a biter” in the titles) and a pair of lovers, concludes the tape. This is primitive Chaplin, still very much steeped in the Keystone slapstick tradition of pratfalls and well placed kicks to the rear end. The Tramp an aggressively mischievous character who smokes incessantly, striking matches on the neck of poor bystanders and flicking ashes in everything from tipped hats to open mouths. The Chaplin magic comes through in the timing and the grace.

A Jitney Elopement is straight slapstick, an often inspired but otherwise familiar tale of mistaken identity and romantic entanglements ending in a Keystone-like car chase. The Tramp, however, features his most fully formed story to date and injects an element of pathos that will become central to Chaplin’s later films. The Tramp saves a girl from three ruffians and is rewarded with a job from her father (he proceeds to wreak havoc on their family farm), but stays only because he’s fallen in love. By contrast By the Sea feels thrown together, and likely was as Chaplin and company shot the loosely connected series of beachside gags in one day. Work finds Chaplin back in form: a force of pure chaos as a paperhanger’s assistant who turns a cozy home into a glue-spattered disaster area. You can see Chaplin’s story sense improve with The Tramp and Work while his persona becomes less aggressive and more hapless, oblivious to the destruction he’s causing all around.

Chaplin doffed his duds and his ubiquitous mustache for the first time since leaving Keystone and the last time in the silent era for A Woman, a hilarious short in which he disguises himself as an elegant society lady. As he flutters his eyelids and flirts with two leering men, including his sweetheart’s married father, she watches in tickled amusement. In The Bank, one of his best Essanay shorts, he waddles up the bank vault only to pull out a bucket, a mop and a smock. Chaplin smoothly combines pathos and slapstick in this story of a dreamy, lovesick janitor, the first of his Essanay films to approach the level of his later Mutual classics. Shanghaied is classic silent situational comedy involving a boat, a stowaway, a dastardly plot to sink the ship, and a plenty of seaborn humor. Chaplin’s gags flow smoothly through a cohesive narrative, building to an organic climax (as opposed to often arbitrary conclusions of his first Essanay efforts), while his talents as a physical comedian are in full display as he balances a dinner tray on a stormy sea and dances a spontaneous jig.

Chaplin is at the top of his form in the his final three films for Essanay. He takes two roles in A Night at the Show, the drunk dandy that was his music hall specialty and a working class rube with a droopy mustache, to wreak havoc at a vaudeville show. Producer David Shepard’s reconstruction of Chaplin’s original two reel version of Burlesque of Carmen, which was expanded by Essanay to four reels with outtakes and new footage, brings the sprawling parody back down to the concentrated, cohesive, and very funny comedy Chaplin originally created. Police is classic Chaplin, the misadventures of the Tramp who leaves prison for a world of rampant poverty and crime, portrayed with a cynical, satiric eye yet heartened with hope. The edition featured here is newly restored. It’s also his final film for Essanay. Mutual Studios gave Chaplin an offer and Chaplin left in 1916 for complete creative control and an unprecedented contract that made him the highest paid person in the world. Building from his evolution at Essanay, he went on to create a dozen comedy classics that remain, in the eyes of many fans, the most concentrated examples of the Chaplin genius.

The rest of the films are presented as supplements. Triple Trouble was constructed by Essanay in 1918 from an unfinished feature called Life and outtakes from Police and Work. While it lacks the narrative cohesion that Chaplin brought to his late Essanay films, it nonetheless features some excellent comic moments. And the set also features the debut of the newly restored Charlie Butts, a one-reel short assembled from alternate takes from A Night Out and released in 1920.

The set features all of these in both Blu-ray and DVD editions and includes a booklet with an essay by Jeffrey Vance and notes on the films and the restorations. 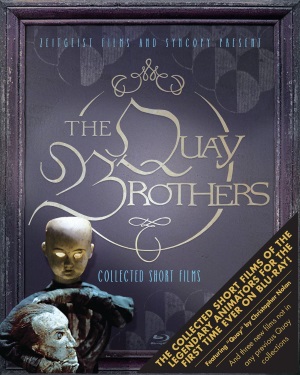 The Quay Brothers: Collected Short Films (Zeitgeist, Blu-ray) – Collaborators and identical twins Stephen and Timothy Quay have garnered a cult following for their strange animated shorts, surreal films created in a collision of 19th and 20th century styles and sensibilities. Their figures—mechanical contraptions of thread and wire, springs and coils, aged machine parts and simple tools—quiver and stutter, as if restless with nervous energy, through abstract dramas in doll house abodes in dreamscape worlds.

Directed in a highly stylized manner, with a shallow plain of focus that purposely keeps objects out of focus and a camera that moves with conspicuous mechanical precision (long before it became common practice in stop-motion photography), their works have a dream-like quality about them. This is directly alluded to in the subtitle of one of their most handsome films, The Comb (From the Museum of Sleep) (1990) where scenes of a lattice-work of ladders shooting through an angular construction is intercut with a sleeping woman. Street of Crocodiles (1986), their most famous short work, references turn-of-the-century cinema as a man peers through a Kinetoscope to watch the nightmare-tinged fantasy of a figure overwhelmed by mysterious forces on the deserted streets of city after dark. These are the longest and most accomplished short films in this collection of 16 short films spanning 30 years of filmmaking, but there are other spellbinding works: the early The Cabinet of Jan Svanmajer (1984) a tribute to the great Czech animator and the Quays’ spiritual godfather; the inventive art history documentary De Artificiali Persepctiva, or Animorphosis (1990); the four short works in the Stille Nacht series. These films, along with Rehearsals For Extinct Anatomies (1987) and The Phantom Museum (2003), showcase a vision of quivering objects and surreal narratives in a shadowy, self-contained dream world.

Three recent works make their disc debut in this collection: Maska (2010), Through the Weeping Glass (2011), and Unmistaken Hands (2013), all of which recently toured the U.S. in a program of Quay films curated by Christopher Nolan, a fan of the filmmakers. He contributes an original documentary, the eight-minute appreciation Quay (2015), a profile of the filmmakers at work and in conversation discussing their inspirations. Also features commentaries for six shorts recorded by the Quay Brothers for a previous disc release and a booklet with an introduction by Nolan, a Quay Brothers dictionary, and an essay by Michael Atkinson.

The complete line-up is featured below: