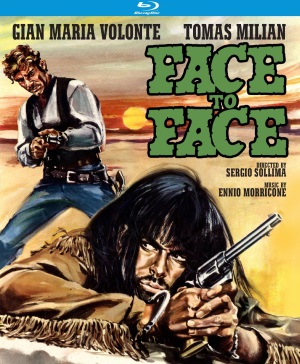 In a genre built on stories of mercenary heroes, sadistic villains, and corrupt authority figures (and in many cases entire towns built and sustained on corruption), Sollima was a filmmaker who made morality and justice (not always the same thing) his central theme. In The Big Gundown (1966), also written with screenwriter Sergio Donati, Milian was a peasant outlaw who proved to be more rogue than criminal, an easy scapegoat for the corrupt men of civilized society. Here he is a ruthless killer and bandit who puts his gang, The Wild Bunch, back together and takes refuge in a desert hide-out called Blazing Rock. Sollima is not the stylist that Leone is but he appreciates the same sunblasted landscapes of barren deserts and dusty towns and Blazing Rock earns its title, a godforsaken natural fort in the hills where the only shade comes from the surrounding rocks or the makeshift shacks. This refuge for outcasts is not much of a sanctuary, but it’s all these people have and they’ve made a community of it.

Where Leone turns conflict into mythic showdowns between large than life figures, Sollima makes every showdown an expression of character. When Bennet is hired to take out an entire gang in a town called Purgatory City (Sollima likes his on-the-nose names), he waits for them to converge like he hasn’t a worry in the world, sprawled out in a chair on the porch of a storefront while the gunman make the long walk down the street like a zombie army. It’s not just confidence, it’s an unhidden disdain for his opponents, and perhaps a recognition that the life he’s chosen is short and brutish and he’s ready to die when his time comes.

Fletcher, by contrast, is an observer rather than a participant, a philosopher prone to ruminating over every situation and moral question, but while he follows an essentially Christian morality, he’s fascinated by Bennet’s outlaw code of power and violence. He doesn’t judge Bennet and any talk of morality is purely philosophical. If anything, Fletcher’s morality is a matter of intellect, not heartfelt belief, and he’s intoxicated by the passion and the power of Bennet’s life. When Bennet takes on the outlaws, Fletcher looks on with fascination before finally stepping out of his ivory tower and taking action. When Fletcher ends up in his first real brawl, he’s electrified by the primal emotions it brings out in him. He can’t wait to put himself in that situation again and he steps up his involvement until he’s practically leading the gang himself.

There’s a third major character: Charley Siringo (William Berger), a drifter who stumbles across Bennet while he’s recuperating in hiding and asks to join the gang. He has his own motivations and the question of his loyalties is significant to the film’s themes. Sollima hasn’t much respect for the workings of law and order in the spaghetti west, which tends to favor the moneyed interests and their property, but he does believe in justice and that shifts his take on Charley over the course of the film.

Milian’s mop of a wig is hideous and his dirty peasant clothes a cliché played for symbolism, a cartoon character of a bandito that becomes more human as the film plays out. He’s the veritable (wanted) poster portrait of the desperate, impoverished Mexican with a gun, a sharp contrast not just to the more familiar dress of the sheriffs and bankers and respectable citizens but to Bennet, the dignified scholar who keeps the accoutrements of civilization while losing its ideals. The two men shift positions over the course of the film, the savage killer developing a conscience while the professor discards his ideals of justice and morality for a simple belief in power and might as the only law that matters. In Italy it was seen as an allegory for Fascism with the intellectual seduced by power and turning into a ruthless leader ready to sacrifice his people as a tactical move.

Politics aside, it’s also a compelling western drama full of shoot-outs, escapes, betrayals, and an elaborate bank robbery that descends into chaos and bloodshed, plus a great score by Ennio Morricone. Sollima lacks the grand imagery and mythic sweep of Leone, but he has a more nuanced presentation of the morality of violence and the cruelties of frontier justice. If Leone’s films are morality tales of vengeance and justice, Sollima’s are political fables of power and injustice and Face to Face is his most interesting film and one of the most unusual spaghetti westerns in the genre.

Kino presents two versions of Face to Face: the American cut, which runs 93 minutes and features an English dub soundtrack, and the longer uncut Italian version, which comes from inferior source material and features the Italian language soundtrack. The review above is based on the longer Italian version, but the American version has the superior audio and video quality by a significant margin. (The above trailer does not represent the video quality of the American cut on the disc.)

The American cut comes from a beautiful-looking HD transfer, with saturated colors and a vivid image. I’ve never seen the European video releases but am informed this is significant upgrade. While not flawless, it’s very nice and better than I could have hoped for given its long American absence. The uncut Italian version, which runs 112 minutes, is not HD—it’s standard definition, presented in 480i—and from a rough, unrestored print. The English subtitles are burned into the image. 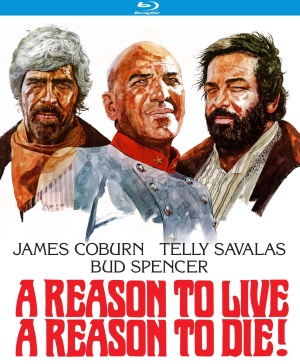 A Reason to Live, A Reason to Die (Kino Lorber Studio Classics, Blu-ray, DVD), directed by Sergio Leone protégé Tonino Valerii (Day of Anger), was made in 1972 after Leone’s Duck, You Sucker and casts that film’s star James Coburn (in his second and final spaghetti western) in the lead. Coburn is Colonel Pembroke, a disgraced Union officer who leads a band of condemned prisoners on a suicide mission to retake a captured fort from the Confederates, using a hidden and closely-guarded tunnel into the heart of the fort. It’s a Dirty Dozen knock-off by way of Where Eagles Dare and The Wild Bunch, relocated to the Civil War and given a personal motivation—the commanding officer (Telly Savalas in a borderline psychotic mode) betrayed Coburn most brutally.

Yes, it is derivative, and Valerii and co-writer Ernesto Gastaldi (who also collaborated on Valerii’s Day of Anger) don’t bother developing characters or personalities for any of the Pembroke’s band of cutthroats beyond Italian-bred star Bud Spencer (of the Trinity films), who plays the Bronson role to Coburn’s Lee Marvin (to use The Dirty Dozen as a reference). He takes a stand with Pembroke whenever there’s an uprising among the purely mercenary crew, which is often. Savalas is as Southern as a pastrami on rye, a bit of stunt casting that draws on his Dirty Dozen appearance and was probably wrapped up in a few days, but he does cut a memorable figure among the anonymous Italian and Spanish supporting players

There’s a distinctive spaghetti western morality to the whole enterprise. The criminals gladly pledge loyalty to get out of the noose and a dubiously loyal Union guard is pressed into duty to help keep them in line, but they have no commitment to Pembroke or the Union cause. The lure of buried gold on the fortress grounds, however, is incentive enough to at least keep them interested from one potential uprising to another. If the dubbing doesn’t do it, the fort is a dead giveaway—this is no American outpost but a Spanish fortress—and the landscape is less literal location than mythical spaghetti western badlands, an abstract location disconnected from any identifiable civilization. That may be a weakness for some viewers but it’s part of the distinctive character of the genre and of this film. There’s nothing American in its treatment of the Civil War, no sense of honor or idealism in the fight. It’s just another battle to be won for reasons of greed, power, or vengeance. Which is right in line with the morality of the Italo-Western aesthetic.

The disc looks very good and features the English language soundtrack, with Coburn and Savalas both voicing their parts (the rest are dubbed). This is, however, the 92-minute American cut of a film that was released in Europe at around two hours and Kino doesn’t have the uncut version as a supplement.