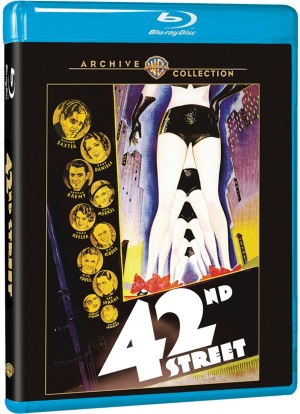 The great character actors of the Warner Bros. stock company fill in the supporting roles, with Ginger Rogers in a memorable role as the gold-digging chorine known as “Anytime Annie,” Una Merkel as her chorus girl buddy, and Ned Sparks as a wise guy investor dropping wry remarks with a cynical sneer. The film introduced three classic songs, “You’re Getting to Be a Habit with Me,” and “Shuffle Off to Buffalo,” and the title song. Berkeley’s dance sequences are magnificently unreal, playing out on a stage that could only exist in a Hollywood studio, and spectacular epic dance number “42nd Street” is a mini-movie in itself. His transformation of chorus girls into geometric patterns became a signature that is still copied and parodied to this day.

While most Warner Archive discs are bare bones affairs, this disc has a terrific collection of extras: the vintage featurettes “Harry Warren: America’s Foremost Composer,” “Hollywood Newsreel,” and “A Trip Through a Hollywood Studio,” the retrospective featurette “From Book to Screen to Stage,” and a short pieces on “The 42nd Street Special,” plus two vintage Warner Bros. cartoons featuring songs from the film: Shuffle Off to Buffalo and Young and Healthy.

The transfer itself is superb. The black and white film was restored for this release and it is sharp and full of detail, with traces of age-related flicker but otherwise no damage or visible artifacts. Not many films from this decade look as good on disc. 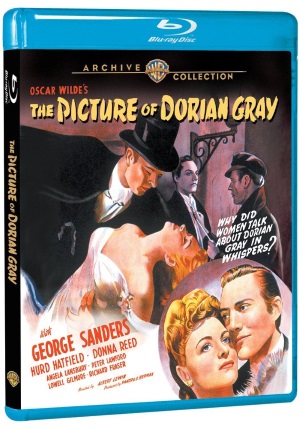 The Picture of Dorian Gray (1945) (Warner Archive, Blu-ray), made for MGM in 1945, is a handsome and elegant adaptation of Oscar Wilde’s only novel and still the best. Hurd Hatfield plays Dorian Gray, a handsome, earnest young man who stops aging after having his portrait painted, and George Sanders takes top billing as Lord Henry Wotton, the hedonistic cynic who tempts the young and moral Dorian to indulge in all the pleasures of the world. As Dorian becomes corrupted and cruel, the portrait begins to change, manifesting his sins in visual form.

The book created a scandal when it was published in the late 19th century. The film, scripted and directed by Albert Lewin, leaves the debauchery off screen and only hints at the depths of bad behavior that the eternally young and thoroughly decadent Dorian is up to. Sanders gets the best lines and he delivers Wilde’s sarcastic aphorisms with a cultured purr. Angela Lansbury is the beautiful young music hall singer that Dorian drives to suicide when he cruelly spurns her and Donna Reed is the daughter of the portrait painter who adores Dorian, an innocent and idealist who Dorian is afraid of destroying through his vice.

Hatfield is an inexpressive actor but an effective image of hollow beauty and his weakness comes off as apathy. The rest of the cast is much better. The film is handsomely mounted and Lewin uses an interesting cinematic device to great effect: he cuts to full color when the new portrait is first unveiled and when the aged, diseased image of Dorian is revealed after his descent into depravity, which provides a visual shock to the black and white drama and enhances to horror of the grotesque mutation of the painting. It’s an intelligent adaptation that is respectful of the novel (even when it changes details) and a compelling film on its own terms.

The black and white film was originally released with color sequences and the Blu-ray restores those color sequences, which jump right out from the monochrome scenes on each side. The cinematography by Harry Stradling Jr. won an Oscar and it looks gorgeous in this transfer. The disc also includes commentary and bonus short films from 1945. The 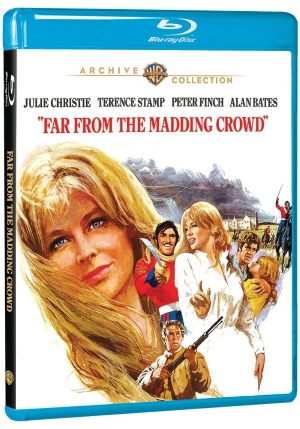 Far From the Madding Crowd (Warner Archive, Blu-ray) – Julie Christie is enchanting as the beautiful Bathsheba Everdene, a young heiress who defies conventions attracts the amorous attentions of three suitors, in John Schlesinger’s epic 1967 film of Thomas Hardy’s classic novel. Bathsheba is a headstrong woman who inherits her uncle’s farm and proves herself a smart and capable businesswoman but she is capricious when it comes to romance. Alan Bates is the plainspoken shepherd and rejected suitor who manages her livestock, Peter Finch is a wealthy older man she flirts with, and Terence Stamp is a dashing cavalry officer she marries after a memorable courtship involving a flamboyant display of swordsmanship (one of the film’s most memorable scenes).

Set in the lush, green, rural countryside of rolling hills in the late 19th century, it is beautifully photographed by Nicolas Roeg (who soon became a director in his own right) and Schlesinger captures the era with meticulous attention to detail while bringing modern flair to the storytelling. Schlesinger had directed Christie to an Oscar in Darling, and if she’s a little out of place a dynamic 19th century woman, she is also luminous and full of life and passion. The film was a financial and critical flop in the U.S.in 1967 but its reputation has grown in the years since for its intelligent script (adapted by screenwriter Frederick Raphael, who won an Oscar for Darling, also starring Christie), sumptuous photography, and fine performances.

Newly remastered for Blu-ray and it is gorgeous. Roeg widescreen photography brings out the green that dominates the landscape and the color comes right out in this transfer. Includes an archival promotional behind-the-scenes featurette from 1967 featuring the cast and crew. 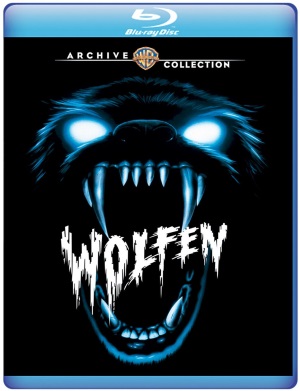 Wolfen (Warner Archive, Blu-ray) – The werewolf movie was revived and reworked with a vengeance in 1981 andWolfen, adapted from the Whitley Strieber novel and directed by Michael Wadleigh (his first feature since the epic concert film Woodstock), was a far more radical take on the genre than either An American Werewolf in Londonor The Howling, though not as popular as either. Set in New York City during the era of urban renewal and homegrown terrorists, it begins with the bloody murders of a millionaire developer and his wife by assailants with unidentifiable weapons. The authorities think that a terrorist organization is responsible but the investigation by an unconventional homicide detective (Albert Finney) reveals a string of otherwise unrelated deaths with similar details and evidence that wolves are somehow involved, even though they are extinct in New York.

Wolfen is not a werewolf movie by strict definition but it delves into American Indian lore involving shapeshifters and ancient animal spirits as well as urban legends of an underground culture of wolves who hunt in the cities. Wadleigh uses evocative Steadicam POV shots of the wolves moving through the city, seeing the world through heat signature and scent, that are eerily similar to video surveillance technology used by the FBI on the suspected terrorists. Diane Venora and Gregory Hines make their respective feature film debuts as fellow investigators and Edward James Olmos is memorable as an American Indian activist who guides Finney through the lore of his people. It’s a smart take on the man-versus-nature horror strain with political, social, and cultural dimensions rare in the genre, striking imagery, evocative atmosphere, and genuinely suspenseful thrills.

It’s a fine-looking presentation of an oddly eccentric modern horror film that has aged well. No supplements beyond a trailer. 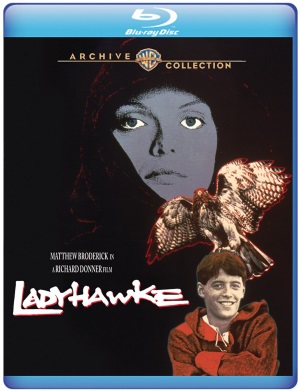 A mix of supernatural tale, medieval fantasy, and tragic romance, Ladyhawke (Warner Archive, Blu-ray) from 1985 is an old-fashioned costume adventure with a dash of modern attitude thanks to top-billed Matthew Broderick. He was a rising star at the time thanks to WarGames and he plays a young thief who ends up a kind of go-between for a dauntless knight (Rutger Hauer) and a beautiful maiden (Michelle Pfeiffer), lovers cursed never to be together. In the daylight, she is a hawk who stays close to the knight, while at sunset she becomes human and he turns into a black wolf. It turns out they all have common enemy: Bishop (John Wood, also from WarGames). This isn’t a special effects picture, mind you. The battles are very down to earth and physical and real-life hawks and wolves are used for the character alter egos. They are characters in their own right and are photographed beautifully by Vittorio Storaro, who brings a sense of magic and majesty to the imagery.

Richard Donner directs with a hearty sense of adventure and the romance of chivalry in the cruelty of the medieval era and Broderick, Hauer, and Pfeiffer all manage to straddle period portrayal and modern presence. The music, however, dates the film indelibly. The unmemorable orchestral score is supplemented by contributions from Alan Parsons, whose synth-driven music has an electronic dance beat and sounds like discarded tracks from “I, Robot.” And the transformations are awkwardly old-fashioned. I guess Donner was going for a romantic sense of magic—the visceral transformations of An American Werewolf in London andThe Howling certainly wouldn’t do here—but the lap dissolves of human faces over animal heads against time-lapse sunsets and sunrises look awfully hokey. It’s a weakness in an otherwise entertaining period adventure with a true romantic streak.

It’s a great-looking disc, however, with saturated colors (especially the glow of sunrise and sunset) and vivid textures in the image. No supplements beyond a trailer.