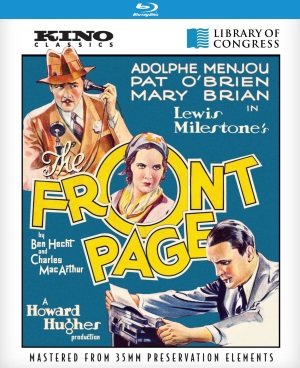 The Front Page (Kino Classics, Blu-ray, DVD) – The original 1931 screen version of the rapid-fire newspaper comedy written for the stage Ben Hecht and Charles MacArthur stars Pat O’Brien as the crack reporter Hildy Johnson, ready to leave the beat for marriage and an office job, and Adolph Menjou as the crafty editor who pulls every trick to keep Hildy on the job to cover a breaking story: the execution of a convicted killer who is more addled political radical than murderous felon. The film opens on a test drop from the scaffold that is to hang Earl Williams (George E. Stone), then the camera glides over to the reporter’s room where the thick-skinned gentlemen of the press prove that they are no gentlemen.

Is this the stuff of comedy? It is in the hands of Hecht and MacArthur, former newspapermen with plenty to say about the cutthroat tactics of journalists. These guys are equal parts con men who will do anything for a story, hard-boiled professionals jaded by the job, and public servants out to dig up the hidden dirt of corruption and crime (even if they have to commit a few themselves along the way). And they knew the dirty game of Chicago politics. Though the film never explicitly says so (the opening titles put this in “a mythical kingdom”), this is set in the cradle of Chicago politics, where everything is a matter of power and public appearances, including the impending execution of a socialist who has been railroaded to placate the voters. When he escapes—using the Chief of Police’s own gun!—Hildy and Walter become conspirators in hiding the felon until they can get their scoop and blow the lid off the mayor’s scheme.

Hecht and MacArthur didn’t write the screenplay but it’s a fairly faithful adaptation and director Lewis Milestone (who was fresh off an Oscar for All Quiet on the Western Front) drives the film with a rapid-fire pace that set the style of thirties screwball comedy. There were faster films to come but in 1931 this kind of rat-a-tat byplay was quite fresh and Milestone pushes the rapidly-evolving technology of sound recording and editing to create punchy montage sequences that hadn’t been since the silent era and sophisticated camerawork—dollies, whip-pans, and a 360 degree turn—that we tend to forget began early in the sound era.

This wasn’t Pat O’Brien’s first film but it was his first lead and his big Hollywood break, and it established the persona he played (or played off of) for decades to come: street smart, witty, clever, but also amiable and good-hearted. Adolph Menjou (a last minute replacement for the original actor, Louis Wolheim, who died just before shooting began) is pure calculation as Walter Burns, the manipulative editor who surely bleeds ink and is driven more out of competition and ego than dedication to the profession. Hildy’s bride-to-be (Mary Brian) is simply a competitor to Walter and he plies every dirty trick he can think of to stop their New York trip.

If that all sounds familiar, maybe it’s because it’s been remade three times since, including the best known version His Girl Friday, directed by Howard Hawks at an even faster pace and featuring Rosalind Russell as Hildy, giving a battle-of-the-sexes twist to the whole thing. If Hawks betters this version, he had a great template to work from and a high bar to meet.

This edition is mastered in HD from 35mm elements preserved by the Library of Congress, but it’s not a restoration. This film slipped into the public domain almost 50 years ago and has therefore not been protected by a studio. The source material varies, with some sequences clearly from second-generation copies, some patches full of scuffs and scratches, and parts of the soundtrack doused in hiss. Given all that, it is the best version I’ve seen on disc. The HD transfer captures detail and texture in the image that previous releases never showed and the scenes flow smoothly without the pops and jerks and rough splices of poor prints previously used.

Both the Blu-ray and DVD editions feature commentary by film historian Bret Wood, plus two radio play adaptations (an hour-long production from 1937 with Walter Winchell and James Gleason and a 1946 version reuniting Menjou and O’Brien) and a short documentary on film preservation at the Library of Congress.