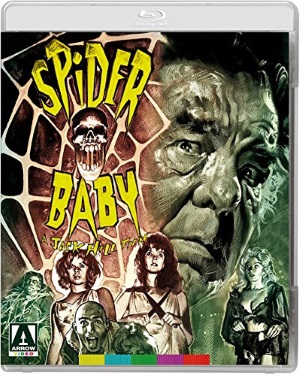 It’s kinky and cruel and oddly sweet all at the same time, and it sneaks by thanks to the performances (not necessarily sophisticated but all committed to the characters and perfectly pitched to the tone of the film), grindhouse elements and the offbeat humor and black comedy woven through the piece. Hill peppers the script with Wolf Man references, from a conversation between Peter and Anne (the lawyer’s secretary) discussing horror movies to Lon Chaney’s Bruno ominously observing “There’s going to be a full moon tonight.”

Washburn and Banner are a terrific sister act, one moment sniping at each other, the next conspiring, and they reveal a childlike innocence to their actions: murder as a form of play and curiosity, without any real understanding of the consequences. Sid Haig is absolutely perfect as Ralph, sweet and curious, a well-meaning giant infant in an adult body. He dresses for dinner in a Little Lord Fauntleroy outfit that looks like it shrunk down three sizes since he donned it. Quinn Redecker plays Uncle Peter like he’s the B-movie Robert Cummings role and he does a great job of it. He’s affable, likeable, kind, and instinctively affectionate toward the children. “Aw, he’s just a big kid!” he exclaims when Ralphie crawls over to check him out, like a puppy unsure of this odd new smell. Chaney cited this as one of his favorite roles and it shows in the emotion he puts into it. His final scene (which I won’t give away) is truly touching, a last sacrifice to protect the children the only way he knows how.

Hill clearly draws from Psycho, but with an innocence to the psychos of the story, with the lighthearted attitude of a William Castle film, but Hill’s strange brew end up being more Lord of the Flies by way of Freaks and Freud, with a provocative commentary on adolescence and the primal drives of the human animal through the lens of a genre movie. Think about it: as these adults regress to children, they revert to primitive stages: deadly games, cannibalism, death and murder as acceptable forms of protest, and adolescent sexuality. I really don’t understand what Carole Ohmart is doing in skimpy lingerie parading in front of the mirror (and for the camera). It’s adult content for what is more properly a drive-in movie, a mix of horror and parody and surreal weirdness, a weird detour that displays her kinky side, but it also rouses feeling in Ralphie, who spies on her through the window and carries her off like an infantile Frankenstein’s monster driven on curiosity and inexplicable instincts. Put this next to Virginia’s teasing little game of spider with Uncle Peter and you’ve got something both inspired and unsettling. While he’s tied to a chair, she climbs into his lap and says how much likes him, suggesting a nascent (or lingering) sexual desire behind the mental and emotional regression, either leftover from their “older” selves or a rather Freudian portrait of childhood sexuality complicated by the collision of a child’s emotional state with an adult body.

This is far more daring than Peter Brook’s famous take, and it was all but ignored by critics, largely due to its exploitation origins. Because of the film’s long delay from completion to release, it was dumped onto the second half of double bills. Decades later it was revived and reevaluated, thanks to public domain video copies and TV showings, and it’s been on DVD in numerous editions. Arrow presents it Blu-ray debut in a superb “Director Approved” Blu-ray+DVD Combo set, with a lovingly restored image (few public domain movies have received the kind of love that this film has gotten in the last decade or so), and it also has a companion piece of sorts in another Jack Hill Blu-ray debut. 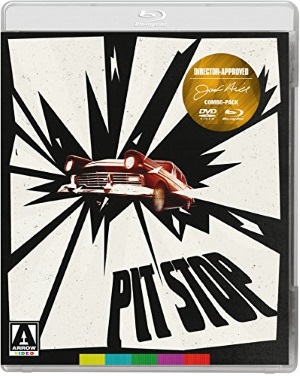 Spider Baby stars Sid Haig and Beverly Washburn reunited with Hill for his edgy, tight 1967 racing picture Pit Stop (Arrow, Blu-ray+DVD), one of Hill’s best efforts and a little seen gem. Dick Davalos (James Dean’s brother in East of Eden) is a curt, quiet street racer lured to the dangerous, short-lived sport of Figure 8 racing (a hair raising collision of stock car and demolition derby) by conniving promoter Brian Donlevy. He just wants a grudge match with his quick-tempered, strutting champion (Haig), but cool customer Davalos has bigger ambitions: he wants to use the crowd-pleasing track as a catapult to the pro circuit and he’ll run down anyone in his path.

It’s a surprisingly handsome picture considering, shot quickly and cheaply in B&W to make use of fast film stock for the high energy nighttime race track scenes. The careening track scenes are so dynamic they overshadow the climactic professional race but Hill makes that work for him in a chilly coda. The real story is how Davalos turns from cool competitor to ruthless rival and his icy stare and surly attitude is perfect. Haig’s explosive turn as the preening champ is both wild and wounded but the best turn belongs to the understated Ellen Burstyn (under the name McRae) in her first major role as the mechanically minded wife of a racing champ.

Both of these films have been mastered from new HD transfers supervised by Jack Hill, and both feature a substantial collection of supplements.

New to this edition is the “Cast and Crew Panel Discussion” with director Jack Hill and actors Quinn Redeker and Beverly Washburn from a screening at the 2012 Film-to-Film Festival at Academy of Motion Pictures Arts and Sciences. There’s also an extended scenes and alternative opening title sequence (which have been included other earlier disc releases) and Jack Hill’s 1960 student film “The Host,” which is also the film debut of Sid Haig.

Both sets feature booklets with new essays and archival articles, and two-sided covers with reversible artwork.