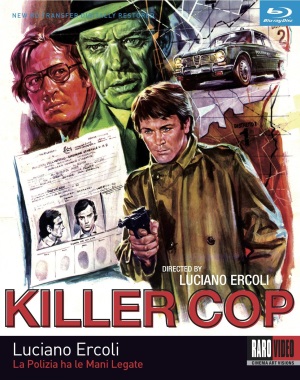 Raro has been championing the poliziotteschi—brutal crime thriller and mob dramas from Italy in the 1970s—since its revelatory release of Fernando di Leo’s filmography. Killer Cop is a minor but interesting addition to the library, a low-key film that (unusual for the genre) focuses on honest cops trying to do their job in a culture of corruption and political intimidation. Italian audiences of the day would have recognized the event as a reference to a real-life bombing at Piazza Fontana, which was unsolved, and director Luciano Ercoli suggests a conspiracy that could have come out of the American cinema of the day, like The Parallax View. It’s short on exposition, which is as interesting as it is frustrating—the whole conspiracy remains shadowy and the complicity of the police and justice officials is unclear—but also gives the film an atmosphere of distrust of all official representatives. The bomber himself (Bruno Zanin) is a kind of sad-sack patsy, not even a true believer but a foot soldier getting his orders from phone calls and abandoned by his bosses when the case spins out of their control.

As far as I know, this is Ercoli’s only poliziotteschi but he brings an interesting attitude to the genre.

Blu-ray and DVD, with both Italian and English dub soundtracks (the Italian is preferable, as the English dubbing is sloppy and lazily performed) and optional English subtitles, plus a 20-minute interview with production manager Alessandro Calosci.