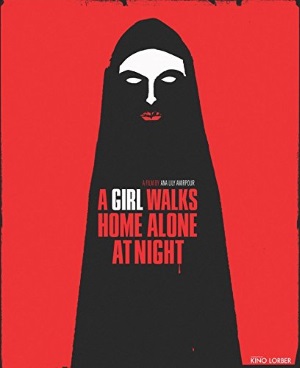 Shot in high-contrast black-and-white widescreen almost entirely at night, A Girl Walks Home is like an Iranian film noir by way of a crime drama with supernatural edges. Amirpour uses the widescreen format to present a stripped-away landscape, devoid of bystanders (giving it a ghost town atmosphere) and prowled by predators, criminals, hookers, and other society drop-outs. It was produced in the United States, with night-shrouded California locations transformed into the suburbs and industrial outskirts of an Iranian town by the loaded name of Bad City and a cast speaking Farsi, and financed in a decidedly American manner: production funds were raised in an IndieGoGo campaign. And there are also two rather familiar Persian-American faces in supporting roles: Marshall Manesh (Ranjit in How I Met Your Mother) and Pej Vahdat (Arastoo Vaziri in Bones). The brief glimpse of nudity will likely keep it from screening in Iran but had a good festival run and a theatrical release.

Blu-ray and DVD, in Farsi with English subtitles, with a substantial collection of featurettes, including an onstage Q&A with director Ana Lily Amirpour conducted by Roger Corman and an interview with Amirpour and actress Sheila Vand, plus deleted scenes and a booklet with a graphic novel version of the film.

It’s previously been available through Cable On Demand and VOD and it is now also available to stream on Netflix.