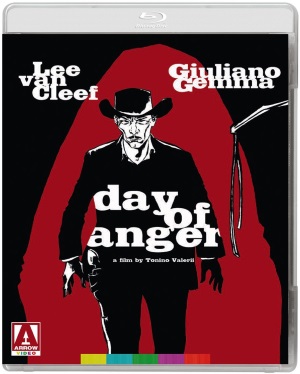 Which is not to say he’s a hero in any sense, merely that he has a kind of honor missing from the crooked town elders who built their power on his stolen money. Talby never draws first, but he has a way of provoking others into trying their luck so he can remove them from his path in self-defense. Which is not to say he shies from a fair fight. When the bad folks of Clifton hire a mercenary to take out Talby, he agrees to the gunman’s terms: a shoot-out as frontier duel on horseback, loading the gun and shooting at full gallop. It’s a fabulous scene and Van Cleef instills in Talby a sense of honor as he matches a rival on equal terms. When he successfully takes over the town of Clifton, burning down the old saloon and building his own gambling palace (complete with pillars carved into giant handguns) as his headquarters, it’s almost comic when the ousted town leaders moan “Now Clifton will never go back to the way it was,” as if their malevolent rule was some kind of paradise for the peasants, the drunks, and the outcasts they kept in their place. Giuliano Gemma has quite the baby face as Scott and the voice in the English dubbing is all young cowhand aw-shucks innocence. You might say the film is about his evolution from hero-worshipping boy to responsible man forced to choose a side.

It’s ostensibly based on a German novel but director and co-writer Tonino Valerii admits that it was merely a matter of co-production financing and his script spun a new story around the basic premise. Which, in the spaghetti western tradition, is in many ways about the corruption behind the myth of the old west. Valerii was an assistant to Sergio Leone on A Fistful of Dollars and For a Few Dollars More and directed the Leone-produced My Name is Nobody. This hasn’t the operatic flamboyance of Leone but it has a more complex portrait of power and corruption and an ambivalence toward loyalty and justice. There’s no sense of triumph in vengeance here, merely inevitability.

The film has been digitally restored for Blu-ray and DVD from the original 35mm Techniscope camera negative. I’m sure it hasn’t looked this good since it was released. Valerii favors the spare visuals of most spaghetti westerns, emphasizing the isolation and emptiness of the Spanish plains standing in for the American southwest, and the disc presents it all with a sharp clarity and vivid burnished palette. It features the original, uncut Italian version (with both English and Italian soundtracks, with optional subtitles) and the shorter international version (in English only). 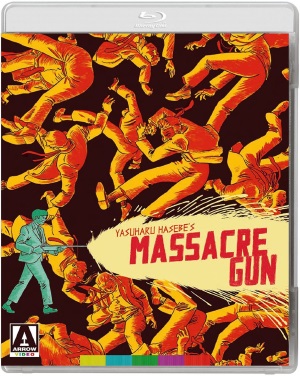 Massacre Gun (Arrow / MVD, Blu-ray+DVD) – Yasuharu Hasebe, a disciple of Nikkatsu’s maverick filmmaker Suzuki Seijun, made his directorial debut with Black Tight Killers (1966), a crazy, campy spy adventure fun shot in bright, pop-art color. His follow-up feature remains in the action genre but takes a turn into the dark alleys of gangster noir with the drama of loyal mob lieutenant Kuroda (Japanese crime movie icon Jô Shishido) who breaks with his boss and ends up in a gang war. It’s Kuroda and his brothers, the hot-headed Eiji (Tatsuya Fuji) and rising boxer and part-time drummer Saburo (Jirô Okazaki), versus his best friend turned nemesis (Hideaki Nitani) in a fight that is doomed to end in tragedy. That’s not a spoiler, mind you, merely a convention of this kind of grim gangster drama with a personal twist. This is a film that opens with Kuroda ordered to kill the woman he loves and his young brother (Jiro Okazaki), who Kuroda is determined to keep out of the outlaw life, getting a beatdown by the same vindictive boss. Kuroda is so loyal that love isn’t enough to buck his boss but family is different and the assault sparks a territory war.

It’s a sharp-looking film, shot in black and white widescreen with dynamic designs and graphic flair, and Shishido is the coolest of the cool and a tragic figure all at once, torn between his loyalties to the code and to his family. The opening sequence, which plays wordlessly under the credits but for a single line (“Kill her”), sets the tone, with a tease of romantic rebellion set against Kuroda’s tortured obedience, and it follows with pulp gangster fantasy all the way to the inevitable showdown.

Hasebe isn’t the rebel of his mentor, Suzuki, and the script doesn’t always make sense—”It could be a trap,” warns Kuroda as they approach a seemingly abandoned ship, to which Eiji responds, “Let’s check it out anyway,” with predictable results—but it offers a cool portrayal of Japanese mobster culture. How do these three hold off a veritable army of gunmen? And what are the rules of the gang war game that both sides seem to be following (and periodically breaking)? Never mind, it’s all in the name of romantic doom and conflicted allegiance. But there is one question: why does Kuroda’s nightclub have a staircase to the offices and private rooms opening right out on the dance floor, as in an old west saloon? Is this a standard feature of sixties jazz clubs I never knew about? Or just another example of design over logic?

Blu-ray and DVD, with new video interviews with star Jô Shishido (who was 80 at the time and kind of drifts through his memories; it’s 18 minutes and in Japanese with English subtitles) and British film historian Tony Rayns, a specialist in Asian film history, who offers a comprehensive history of Nikkatsu, the oldest movie studio in Japan (37 minutes).

Blood and Black Lace (Arrow / MVD, Blu-ray+DVD) was originally scheduled for release this week but has been delayed, according to the distributor. I’ll be reviewing it when I receive it.