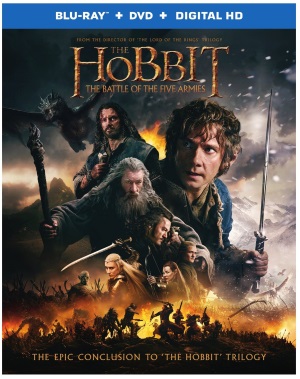 Those caveats aside, it’s an exciting film with a grand sense of scale and sweep and a sure sense of weaving together multiple stories in the climactic battle. Jackson is quite adept at these things and he keeps the stories straight and the momentum up. What he misses is the heart of Tolkien’s tale. For that, we just may need to wait for someone to edit this story down rather than expand it even more.

It’s released in multiple formats. All of the disc editions offer five short featurettes, all 12-minutes or under: “New Zealand: Home of Middle-earth Part 3,” “Recruiting the Five Armies,” “Completing Middle-earth: A Six-Part Saga,” “Completing Middle-earth: A Seventeen-Year Journey,” and “The Last Goodbye: Behind the Scenes,” plus a music video. This is the same version that played in the theaters but come Christmas you can count on an even longer version from Jackson, with commentary and feature-length documentaries.