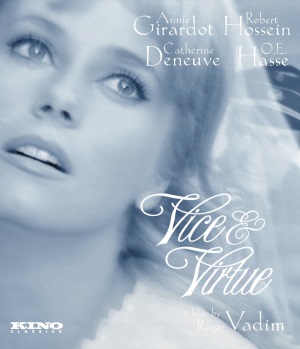 Vadim made his debut just before the French nouvelle vague broke through, creating a sensation with … And God Created Woman and its voluptuous sex kitten star Brigitte Bardot in 1956. Where the rest of France’s ambitious young filmmakers were experimenting and exploring, trying to find fresh and authentic ways to express themselves and examine the world around them, Vadim was a self-promoter with an eye on the box-office and a canny understanding of how sex sells. He presented himself as both sexual rebel and polished studio man, making films with a flamboyant style and an erotic flair, even if it was all in the licentious suggestion of debauchery. Vice and Virtue comes off as particularly calculated—the spectacle of innocent beauties degraded at the hands of Nazi officers anticipate the grotesque Nazi-sploitation films of the seventies—and cynical, set against elegant locations and directed with self-consciously theatrical flair. His lighting effects, where the screen goes dark but for a spotlight on a single character, is contrived at best and ultimately distracting. But finally, there is no investment in a moral, merely a pageant of depravity mostly hinted it with the hope that the audience will fill in the rest.

The widescreen black and white film is nicely mastered and looks quite nice. French with English subtitles, no supplements beyond a trailer. 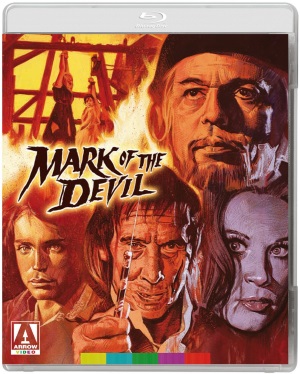 Mark of the Devil (Arrow / MVD, Blu-ray, DVD), a sadistic tale of a corrupt inquisitor and his reign of terror in the name of the church in 1770 Austria, is not for all tastes, and certainly not for all stomachs. The commanding Herbert Lom stars as the Inquisitor and a handsome young Udo Kier takes a rare romantic lead as a young Baron who rescues an innocent peasant girl from the clutches of a local witch-hunter (the villainous-looking Reggie Nalder), only to run afoul of Lom’s unholy warrior. An early entry in the “sex and sadism” genre, this is an exploitation film with an intelligence behind it, but an exploitation film nonetheless: director Michael Armstrong (with an uncredited Adrian Hoven, who also produced and co-scripted) revels in the most barbarous tortures as the impotent Inquisitor punishes innocent young maidens for his own unclean desires. It’s not as interesting or powerful as Michael Reeves’ similarly themed The Witchfinder General but Mark makes its own unique mark with Lom’s strong central performance as the power mad inquisitor and solid support from Nalder and Kier. The cynical ending that deliver a dramatic punch along with the grisly nastiness. Barf bags were handed out to audiences on its initial release.

This is the first American release by Arrow, a British label that earned a reputation as the “Criterion of Cult” for its high-quality restorations and supplements, and this is a superb disc. It’s been on DVD before, most notably in a fine edition from Blue Underground, but this is remastered in HD from original film elements and features with both English and German soundtracks (it was a co-production shot in Austria). It is sharp and vivid and preserves the filmic texture and it looks superb, a marked upgrade from the previous SD release and the definitive release of the film. (Note that the grit you see in the opening credits is on the negative, thanks to sloppy optical work by the company that added the credits.) It’s the first time it’s been presented in its complete, uncut form in Britain, where the censorship of horror films is notorious, and that same edition is released stateside as well.

It features brand new commentary recorded for this release by director Michael Armstrong with moderator Calum Waddell and the new feature-length documentary “Mark of the Times,” about the “new wave” of British horror in the 1960s and 1970s (with interviews with director Michael Armstrong among others), plus the featurettes “Hallmark of the Devil” (about the American distributor of the film) and “Mark of the Devil: Now and Then” (a look at the shooting locations) and interviews with actors Udo Kier, Herbert Fux, Gaby Fuchs, Ingeborg Schöner and Herbert Lom (carried over from the earlier Blue Underground DVD) and composer Michael Holm. Exclusive to the Blu-ray is a collection of outtakes, the trailer, and an accompanying booklet.