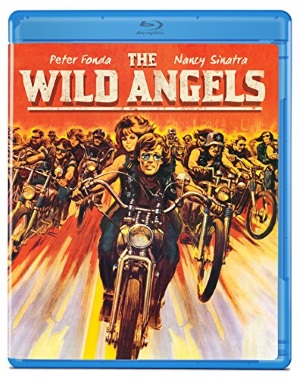 The empty eulogy becomes an epigraph for a defiant anti-establishment rebellion fallen into decadence and anarchy and Heavenly Blues proceeds to preside over the desecration of a church and the systematic trampling of every boundary of decency that Corman could push past censors in 1966. The Wild Angels became a portrait of emptiness and hostility, a social revolution spiraling into narcissism and self-destruction. The film was released before the ratings system was in effect but later given an R-rating for drug use and the HD master looks very good, especially considering its production history. Corman shot quick and dirty when necessary and a few shots stick out as soft or out-of-focus, quite likely a matter Corman making due and moving on to the next set-up. 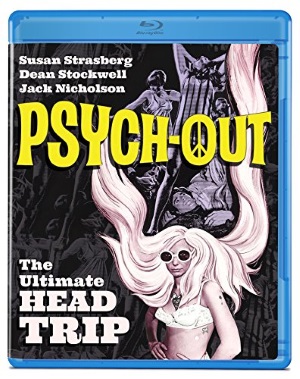 Psych-Out (Olive, Blu-ray, DVD) from 1968 belongs to another genre of youth exploitation cinema, one that put hippies and flower-power and counterculture imagery on the screen with a cautionary warning about the dangers of drugs and the hedonistic rock and roll lifestyle. This one, however, came from music mogul Dick Clark, and for all the drug culture stereotypes and free love displays, it’s at least more open to the positive aspects of San Francisco hippie culture than most counterculture portraits. Part of that is surely due to director Richard Rush, who explored counterculture protest movement with greater insight and intelligence in the underrated Getting Straight and direct the Oscar-nominated The Stunt Man, as well as a cast of ambitious youth movie veterans, many of them on the cusp of becoming major stars.

Jenny Davis (Susan Strasberg) is a deaf girl who arrives in San Francisco from a straight suburban home in search of her brother (Bruce Dern), an artist who tuned in, turned on, and dropped out. Jack Nicholson is Stoney, the callous hippie leader of a jam band who helps her dodge the cops and invites her to stay in his communal home (where there’s always a party going on) and his bed, and Dean Stockwell is band drop-out turned self-styled guru Dave, who lends his connections to her search and his patience to her pain.

This is the Haight-Ashbury Flower Power scene of hippie communes, free love, bad trips (future filmmaker Henry Jaglom sees dead people), and rock happenings, and while it tends to confirm the clichés of the era it’s more critical of the mainstream culture that dismisses and even persecutes the hippies. I’m not really sure why there’s a blue collar gang of tough guys out to get Jenny’s blissed-out, freaked-out brother, who lives in the city dump and is known as “the Seeker”—is there some Jesus allegory that got lost in the rewrites?—but it sure paints the straights as an intolerant, bigoted bunch. And Rush appreciates the energy and the idealism of the culture at its best while acknowledging contradictions in the individuals within. Nicholson’s Stoney can be a groovy guy but he’s also a little self-absorbed and certainly ambitious, trying to get his band out of the one-night-stands and into big venues and a recording contract. There’s something calculating about his embrace of the culture and insincere in his relationship with Jenny, who is more of a curiosity than a commitment. When he’s bored of the novelty his attentions wander to the blond groupie turned band tambourine player (Linda Gaye Scott) and Jenny loses her moorings in the unfamiliar party scene.

The music from Nicholson’s band is shamelessly derivative (their signature tune is reversal of a familiar Hendrix riff) but the film also features The Strawberry Alarm Clock performing their hit “Incense and Peppermint” in front of the liquid lightshow and Sky Saxon (of The Seeds) leading a funky funeral march. Cinematographer Laszlo Kovacs (who went on to shoot Easy Rider) brings a vivid, psychedelic look to the film that are nicely preserved on this disc. And watch for future TV producer and film director Garry Marshall as a plainclothes cop searching for Jenny in the first scene, sticking out of the coffeehouse scene like he’s Sgt. Joe Friday at a peace rally. Unfortunately this disc does not include the featurette from the DVD release.

More Blu-ray and DVD releases from Olive at Cinephiled